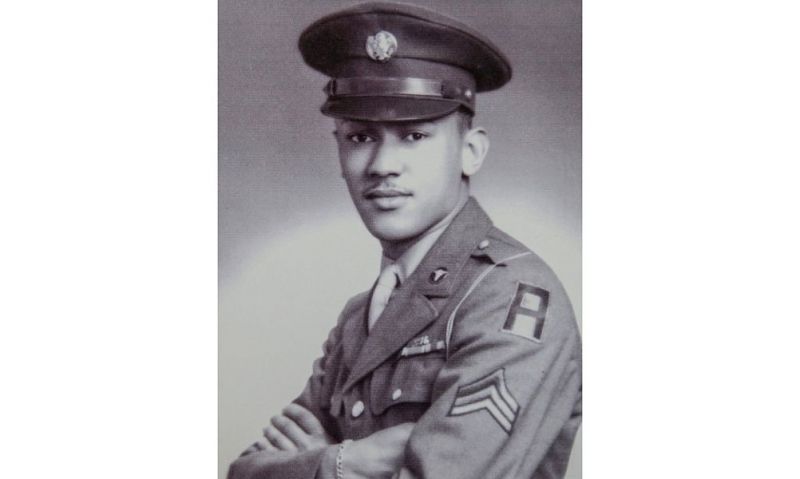 Four congressional lawmakers are pushing to award the Medal of Honor posthumously to a Black Army medic who was wounded on D-Day and spent the next 30 hours treating injured men on the beach until he finally collapsed from his own wounds.

Cpl. Waverly B. Woodson Jr. was with the all-Black 320th Barrage Balloon Battalion and treated 200 troops on the battle-ripped landing area known as Omaha Beach, the stretch of French coastline that saw the worst fighting on D-Day when allied troops launched their amphibious invasion of Nazi-occupied France.

Hollen said the award is long overdue, and upgrading Woodson’s Bronze Star to a Medal of Honor would right a historical wrong. He is confident both chambers of Congress will quickly and unanimously approve the medal. However, a lack of documentation partly due to records being lost in a fire has gridlocked the effort.

“Beyond that 1973 fire that destroyed 80% of Army personnel records. There are very few records left from WWII,” said Linda Hervieux, a journalist who wrote “Forgotten: The Untold Story of D-Day's Black Heroes, at Home and at War,” which chronicles Woodson’s segregated battalion. “Only 1% of Army records from WWII have been retained. The Army maintains that in order to recommend a Medal of Honor they need a trail of records, which do not exist in this case.”

In the early hours of June 6, 1944, Woodson landed with his unit on Omaha Beach as part of the Allied invasion. Despite having been struck by shrapnel in the inner thigh and rear when the landing craft that Woodson was in hit a mine and was blasted by a shell, he spent 30 hours saving the lives of his fellow soldiers, according to Hervieux. Woodson set up a casualty collection point at a rocky embankment on the beach, which provided some protection from the fire from German machine guns.

“He dug out bullets, cleaned wounds, reset broken bones, and did an amputation while the battle raged around him,” Brown said in a news conference.

Woodson was previously recommended to receive a Medal of Honor at the time of his actions, though his commanding officer had recommended him for the Distinguished Service Cross. He was ultimately awarded a Bronze Star and a Purple Heart.

“The higher-ups recommended the Medal of Honor, but he didn’t receive it because of the color of his skin,” Trone said. “As we look at the systemic racism the country is grappling with now, this is part of that. This is a piece of the Jim Crow that sprung from slavery. It’s a continuing journey. We’re here to correct a wrong. The systemic racism led the government to this decision.”

More than one million African Americans served in World War II, but none were awarded the Medal of Honor during the conflict. Seven medals were eventually awarded in 1997 by President Bill Clinton. At the ceremony, Clinton said the men were “denied their nation’s highest honor” because of the color of their skin but “their deeds could not be denied, and they cleared the way for a better world.”

Woodson died in 2005 and his widow Joann Woodson has been advocating for years to upgrade his Bronze Star. If her husband is awarded the Medal of Honor, she plans to donate it to the National Museum of African American History and Culture in Washington, D.C.

“He’s my husband, we had a long marriage and we want to have a legacy for our family,” said Joann Woodson, 91. “He deserves it. We have to keep history alive and history has to be as correct as it possibly can.”

Joann Woodson said her husband faced racial bias in the Army beyond being passed over for decoration. Waverly Woodson was activated to serve again in the Korean War. He was set to be stationed at an Army base in Georgia to be a medical instructor. But he was reassigned when it was discovered he was Black.

“When he got there that’s when they discovered he was a Black man. And then it was decided there’s no way he could be a Black instructor in the South at the time,” Joann Woodson said. “He was then sent to work at [Walter Reed National Military Medical Center].”

Last year, the Congressional Black Caucus, along with Hollen, sent a letter to Army Secretary Ryan McCarthy asking him to open a formal review of Woodson's case, saying he was not awarded for his bravery "because of the color of his skin." Hollen and the other lawmakers also intend to send a letter to President Donald Trump asking him to speed up the process for issuing the long-sought decoration.

Trone said Trump can act immediately and there wouldn't be a need for the legislation.

"We have two bites at the apple," he said.