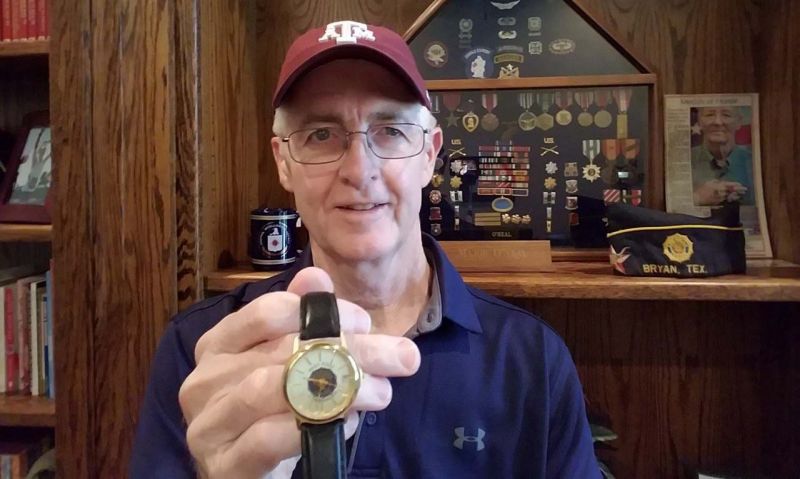 Ron O’Neal displays the watch his father, Nolan O'Neal, received as a past post commander at Earl Graham Post 159 in Bryan, Texas. The watch was missing for five years until an American Legion member discovered it and returned it to the family.

Danny Powell describes his discovery on eBay as “a needle in a million haystacks.”

A frequent shopper on the auction website, Powell was surprised when he came across a gold watch with a black leather band. On the front, The American Legion emblem appeared with the words “past post commander” and on the back, the inscription reads Nolan O’Neal and Post 159.

“The watch is the most memorable and the most personable item I have ever seen on eBay,” said Powell, chaplain of American Legion Post 258 in Jonesboro, Ga. “It’s a rarity.”

He won the auction for 99 cents plus $4 shipping.

Powell then played the role of detective. He quickly discovered O’Neal’s obituary online and learned he was from Texas. So he reached out to Earl Graham Post 159 in Bryan, Texas, via Facebook and the post website. It did not take long until he connected with Ron O’Neal, Nolan’s son.

O’Neal says the watch, jewelry and some other personal items had been misplaced or stolen at least five years ago when his father was in a memory care unit. “It was quite a surprise,” he said. “Apparently he did some digging to reach me. When he sent me pictures of the watch, it was absolutely a shock.”

For Powell, his good deed is just how he continues his service after leaving the Army and reserves, where he served from 1988-96. “I’m always trying to serve others.”

The watch is indeed the most memorable purchase he has made.

“It means the world to me,” Powell said. “That man was a hero. For him to be victimized at the most vulnerable time of his life, at the end of his life, it meant a lot to me to get that watch back to his son. I could literally hear his jaw drop when I told him I had his father’s watch. To hear his voice when I told him, at a time when he thought all was lost, meant the world to me.”

“Dad still wore this watch to church, military events and other important gatherings,” O’Neal said. “We have memories of him wearing it and it meant so much to him because of his camaraderie with those men and women in Post 159. It means a lot to us.”

The elder O’Neal served as an Army Ranger, was commissioned as an officer during Vietnam and received numerous medals, including the Silver Star. After his retirement, he joined Post 159, where he served as commander and led the honor guard, performing at more than 100 funerals for veterans.

“It’s really incredible and pretty special because I saw that some love and care for veterans in dad’s post,” said O’Neal, who also served in the Army. “The members are incredible in how they care for and look out for each other. It really didn’t surprise me but it really did impress me that another American Legion member would pick up on the significance of a watch like that on eBay and go to those lengths to return it.”

O’Neal hasn’t decided exactly what to do with the watch. For now, it’s displayed along with other memorabilia from his dad’s military career.

Regaining possession of the watch “is pretty emotional, and that was compounded by the way dad lost his memory,” the son said. “At the end of his life, those who were still significant to him, were definitely his family and his military buddies. Dad was kind of the ultimate patriot.”

Powell is elated about the reunion but still in awe of the good fortune.

“I don’t know how I got a hold of that watch for 99 cents,” he said. “For it to be on there for three days without anyone else bidding on it is a miracle.”