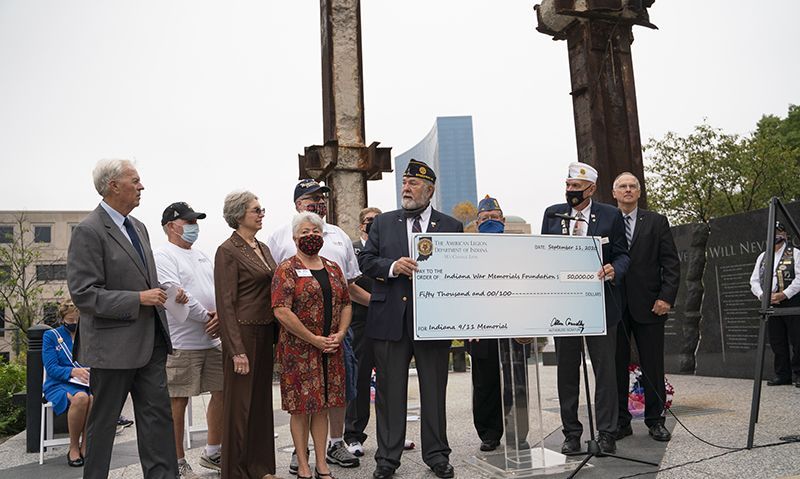 A project to expand the Indiana 9/11 Memorial got a nice boost on Patriot Day from the American Legion Department of Indiana.

During a ceremony at the memorial, located in downtown Indianapolis, representatives from the department presented the Indiana 9/11 Memorial Expansion Project with a $50,000 donation. And with a pledge from Mark Gullion, the Indiana American Legion’s leading candidate for department commander, to make the fundraiser his project if elected, more donations are likely to follow.

“In donating to this worthy cause, it is our hope that the memory of Sept. 11 will never die, and our presence here today is evidence of that,” Gullion said. “That’s why memorials such as this are so important, and that’s why I’m humbled and proud to be here today. I’m also pleased to represent over 80,000 Hoosier veterans who believe as I do, and who live out the belief every day. If this monument does nothing more than inspire us to maintain that commitment, it has served its purpose.”

The $450,000 expansion project for the Indiana 9/11 Memorial, which was built in 2011, will add national and state flags, and an 800-pound piece of Indiana limestone from the Pentagon crash site on the 30x10-foot memorial extension. A “Survivor Tree” from the World Trade Center will also be planted on site.

The expansion also will highlight the more than 5,000 U.S. servicemembers who have died fighting terrorism since 9/11 and honor U.S. Army Lt. Gen. Tim Maude, an Indiana native serving at the Pentagon who was the most senior servicemember killed that day.

Connelly said Hoosier Legionnaires were briefed about the expansion project during their 2019 department convention. “I remember thinking at the time … what a great project this would be for The American Legion,” he said. “It speaks of who we are and what we are about.

Retired U.S. Air Force Brig. Gen. J. Stewart Goodwin, co-chairman of the Indiana 9/11 Memorial Expansion Project and executive director of Indiana War Memorials, said “as a Legionnaire, I’m very proud of the fact the (Department of Indiana) was the first organization to come forward with a donation. I think that any veteran that would see what the Indiana department has done to foster patriotism would want to be part of that organization.”

The current Indiana 9/11 Memorial features two 22-foot, 11,000-pound steel beams taken from the World Trade Center with a bronze, life-sized American bald eagle perched atop one of the beams. Nearby are two black granite walls and four granite monuments, detailing the timeline of the tragic events that took place on that fateful day.

“I have had the honor of visiting many monuments and memorials. All are special in their own way; all are unique, if only because of the individual lives they honor,” Gullion said. “This memorial is no different. Such memorials reflect our gratitude and our determination to remember … but we must never forget that they serve to remind us that the price of liberty is paid in blood: The price paid to purchase liberty, and the price paid to preserve it.”