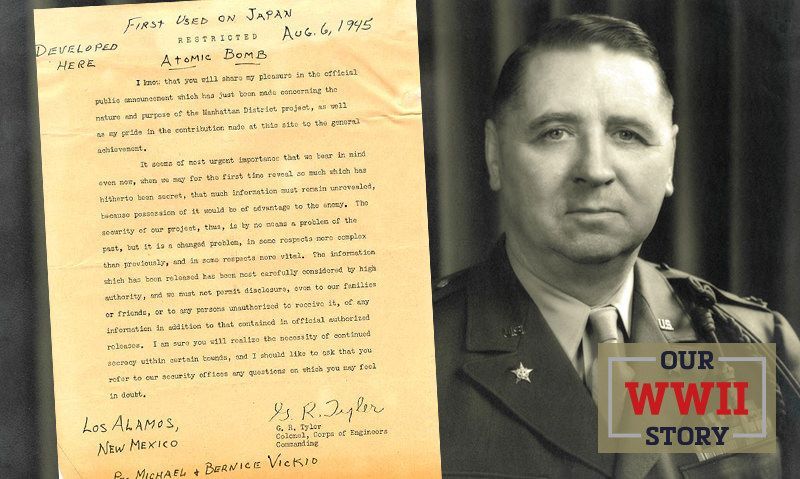 American Legion Past Department of South Carolina Commander Michael Strauss, now a member of the National Executive Committee, was researching the organization’s centennial history in his state when he uncovered a little-known fact about a very big secret of World War II. He found a yellowed letter written by Col. Gerald R. Tyler. Across the top and bottom of the letter, in all caps: RESTRICTED.

The letter was written by Army Corps of Engineers Col. Gerald R. Tyler, who had command of the Manhattan District project and the top-secret Los Alamos, N.M., laboratory and testing grounds where the atomic bomb that ended World War II was developed.

Tyler was a 1st Infantry Division lieutenant when World War I came to an end. He was also one of seven South Carolinians who participated in the March 15-17, 1919, Paris Caucus that established The American Legion.

Col. Tyler had led a major wartime expansion effort at Pine Camp – later Fort Drum – before he was selected as the third commander of the 7,000-population “secret city” in New Mexico.

In the letter, Col. Tyler notes that the bombing made public the “nature and purpose of the Manhattan District project.”

However, he implored those to whom it was sent that “much information must remain unrevealed, because possession of it would be of advantage to the enemy. The security of our project, thus, is by no means a problem of the past, but it is a changed problem, in some respects more complex than previously, and in some respects more vital. The information which has been released has been most carefully considered by high authority, and we must not permit disclosure, even to our families or friends, or to any persons unauthorized to receive it, or any information in addition to that contained in official authorized releases. I am sure you will realize the necessity of continued secrecy within certain bounds, and I should like to ask that you refer to our security offices any questions on which you may feel any doubt.”

Tyler, a native of Aiken County, S.C., served as commanding officer at Los Alamos from October 1944 until November 1945.