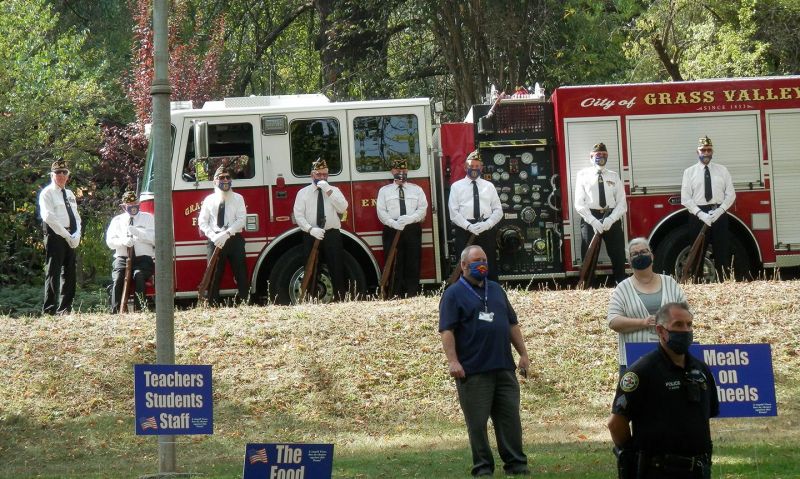 For most Americans, the coronavirus pandemic has taken an emotional and mental toll. But for those who lost a loved one during this time, there was added pain. Most funerals were delayed, taking away a chance at a final farewell from family and friends – and in the case of veterans, full final military honors.

The latter is something that heavily resonated with Frank Gallino American Legion Post 130 Adjutant Mike Hauser. The Vietnam War veteran said his brain had been “absorbing” all the things going on locally and nationally during the pandemic, including seeing several veterans in the area pass away during the coronavirus.

“We know their families, they’ve just been broken-hearted they’ve not even been able to have a service for their family members,” Hauser said. “And the other thing that kept hammering on me … is that (members of the community) were looking out for everybody else. The theme just kept hitting my head over and over: Angels Among Us.”

That’s why Post 130 organized the Sept. 26 “Angels Among Us” Remembrance Day at Memorial Park in Grass Valley, Calif. The ceremony included reading aloud the names of area veterans who died during the pandemic, as well as honoring essential workers and other members of the community who have come together to support each other during one of the nation’s most difficult times. A bell was rang after each name was read, while Post 130’s honor guard closed the ceremony with a 21-gun salute.

Hauser said the area’s essential workers are similar to veterans in that “they do their job … as a team. That was kind of the impetus for this whole thing: To say thank you to the vets that passed … that we have not been able to address and thank you to the community.”

Post Commander Claude Hessel served as the ceremony’s emcee, while other speakers included representatives from local government, the Chamber of Commerce and the Nevada Joint Union High School District boards.

Family members of the veterans honored during the ceremony were invited to attend while observing proper social distancing. The ceremony was also streamed online and can be seen here.

Hauser said Nevada County has the highest ratio of veterans to population in any California county. “When we do something, we really have a base that either is a vet or a family of a vet,” he said. “It’s just a tight (community). There’s a thread. We just tried to honor the angels among us.”