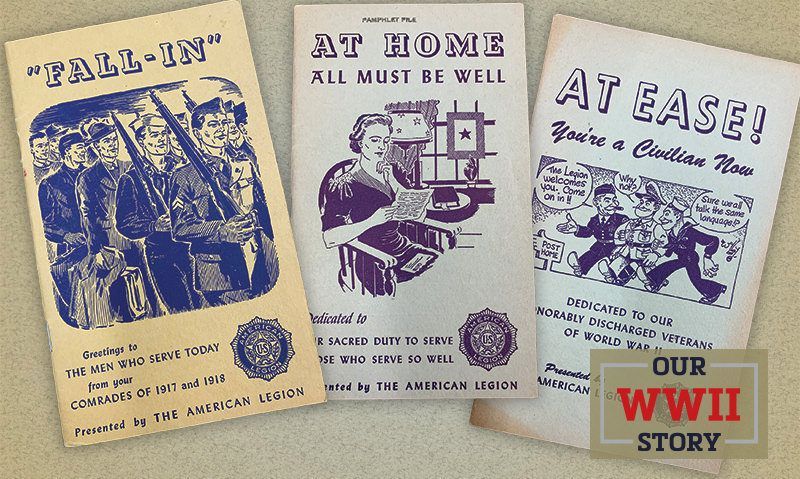 As experienced wartime veterans, American Legion members knew they could provide meaningful counsel for a new generation of military personnel, over 61 percent of whom were drafted, to fight in World War II. Each volume in a series of pocket-sized booklets from The American Legion addressed a different audience – the troops, families at home and newly discharged veterans. Nearly 3 million of the booklets were published and distributed in 1942, 1943 and 1944.

“Fall In!” was first in the series, characterized by American Legion National Commander Roane Waring as “letters from a veteran father to his sons in service.”

The booklet begins by answering the question, “What are you defending?” First, it lists the four freedoms President Franklin D. Roosevelt articulated in his Jan. 6, 1941, inaugural address, as freedoms all the humanity ought to enjoy.

- Freedom of speech and expression

These freedoms were in peril as the Axis powers seized and expanded their territory and influence in Europe, Africa, Asia and the Pacific. “Fall In!” added the Atlantic Charter’s eight war aims and the Preamble to the U.S. Constitution, setting in bold type: PROVIDE FOR THE COMMON DEFENSE. The publication explained in clear terms what it means to join the military fraternity, what to expect from wartime service and the life adjustments inherent within it. It listed 12 “don’ts” of military service that included criticism of officers, being a “loud-mouthed authority on any one subject,” acting too tough, repeating rumors, making up stories about yourself, telling civilians about the privations of wartime service, borrowing government vehicles or weapons without orders and becoming “involved with the other sex in such a way as to impair your health and future.”

The booklet informed the troops about pay scales, insurance, the importance of writing a will and keeping good track of discharge papers. “Many veterans of World War I did not take proper care of their discharge papers,” the booklet explained. “This has caused them no end of trouble. When the discharge is received, it should at once be taken to the office of the county clerk, in your home county, and there made a part of the permanent record of the county by having certified copy made and registered.”

You have left your home to serve your country.

Serve it to the credit of yourself, your family, your state and your country.

You are now a comrade in the fraternity of American servicemen.

If you need advice, not obtainable through military channels, call upon the members or the service officer of the nearest Legion post, or if desired write direct to the Defense Division, National Headquarters, The American Legion, 777 North Meridian St., Indianapolis, Indiana.

We will help you in your claims and in your connections with the U.S. Veterans' Administration.

We will feed you in our homes.

We will see that where possible you get the hometown newspaper while you are away.

Our American Legion club houses and memorial homes are open for your use.

We are sending playing cards, cigarettes and musical records for use on the long transport voyage and when you get "over there."

We are comrades now and we will serve you in every way possible while you are in service and after you come back home.

“At Home” was a follow-up booklet to help families understand how to support their loved ones at war. Within its pages were explained proper display of the Blue Star Banner (indicating the number of family members deployed), a message from the American Legion Auxiliary national president and what not to expect in letters from the warfront. “Do not, if they have been in battle, expect them to tell you of all of the experiences,” the second American Legion booklet explained. “There are some experiences that just are not told. Do not ask that they talk about those things. They are theirs and theirs alone.”

The publication went over medical records, pensions, burial allowances, child welfare services and ways in which The American Legion could help. “The American Legion has had long experience in handling cases of men of World War I, as well as some of the problems of the dependents of those men and women. We know from our own experiences things that should be done and things that should be avoided. All that knowledge is at the service of the men in the armed forces and their dependents at home. Use that service.”

The final installment of the series, “At Ease,” advised newly discharged World War II veterans about “the all-important rehabilitation service of our organization,” the booklet’s introduction states. “It explains how that service operates, the insurance features, hospital and domiciliary care, pensions, vocational training, and employment. It describes the work of the Legion’s National Legislative Committee and how it functions to secure legislation of a beneficiary nature to veterans and to the nation as a whole. It relates the story of the organization's child welfare service.

“Truly the Legion's program is one of service – service to those who honorably serve the nation in time of war. We want you who are now ‘at ease,’ having returned to civilian life from honorable service in the armed forces, to call upon The American Legion for further service.”

“At Ease” included an excerpt from Brig. Gen. Frank T. Hines, then chief of the VA, from his remarks at the 25th American Legion National Convention, in Omaha, Neb.:

“I know of no other organization that can do more in assisting in the solution of the many problems which will arise, after the victorious termination of this great conflict.

“During this readjustment period, the problems will be local and state, as well as national. The major of these will be re-employment. The nearer we are to having all of our citizens employed, the nearer we will approach the ideal of a strong democratic nation.

“Our efforts should be directed primarily to doing all that can be done to make sure that every veteran is gainfully employed. In this I am confident that The American Legion can be of very material assistance.”