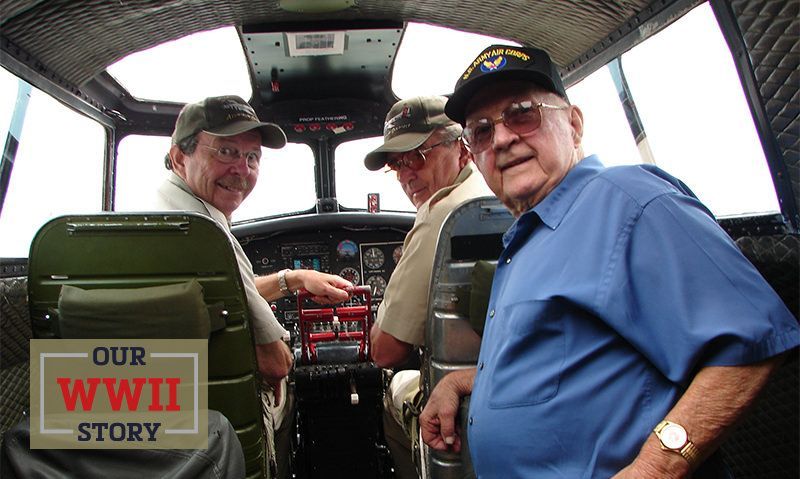 Eugene Moran (right) in a refurbished B-17 with Civil Air Patrol pilots over La Crosse, Wis., in 2007. (Photo via Joni Moran Peterson)

As with many American Legion posts, the history of William Schoville Post 220 in Soldiers Grove, Wis., covers multiple generations. The post was founded in 1926 by World War I veterans, but after their time in the service the next generation – that of World War II – helped solidify it for the future.

Soldiers Grove has slightly more than 500 residents, so connections of both blood and friendship run deep. Don Moran is a member of American Legion Post 36 in Des Plaines, Ill., but has many such connections to the Wisconsin village, as does his relative Joni Moran Peterson of Wausau, Wis. They both hold the stories of a trio of Soldiers Grove natives and World War II veterans.

Joni’s father, Eugene Moran, was a tail gunner for a B-17 in the Army Air Corps, in which role he was serving when his plane was shot down over Bremen, Germany in November 1943. The only survivor other than the navigator, he survived a 4-mile fall still in the tail section, without a parachute. He was severely injured and spent the rest of the war as a POW, being liberated in 1945. According to Joni, her father would talk to his family about his experiences “only when he was drunk.” [A book was later written about Eugene’s World War II story – “Tailspin” by John Armbruster.] When he returned to Soldiers Grove, he joined Post 220 and eventually became a life member; according to his obituary in 2014, he “held several leadership positions and chaired numerous service projects.” His work for veterans went beyond his post, though, and he received Wisconsin’s Lifetime Veterans Achievement Award for his service to them. In 2008, a street in Soldiers Grove was named for him.

One of Eugene’s best friends was Herbert “Herb” Helgerson – Don’s cousin-in-law – a bulldozer operator in the Army’s 291st Engineer Combat Battalion. He was involved in critical bridge operations around the Battle of the Bulge, for which he received the Bronze Star. He also became a life member of Post 220. He died in 2017.

Beauford T. Anderson was another friend, Post 220 life member – and Joni’s late husband’s cousin. He received the Medal of Honor for his actions at Okinawa, holding off a Japanese attack by “hitting mortar rounds on a rock and throwing them like grenades,” according to Don. Although wounded himself, he refused evacuation. He also received the Bronze Star at Leyte Gulf for similarly putting himself in danger to protect wounded comrades. A memorial park in Soldiers Grove is named for him. He died in 1996, and is buried at Arlington National Cemetery.

The linchpin of these stories, as in so many other small communities, is Post 220, gathering friends and family. Joni says of the post, “My two brothers who are veterans are also members of Post 220, and most of my sisters and I belong to that Auxiliary (unit).” And it figures in her family’s stories: “My favorite Legion anecdote involves my baby brother Pat. He was about 5 years old in 1969 when he was sitting at a local restaurant counter with my mother. Another person leaned over and asked him if he was Norwegian or German. Not missing a bite or a beat, he simply responded, ‘I think I am American Legion.’”