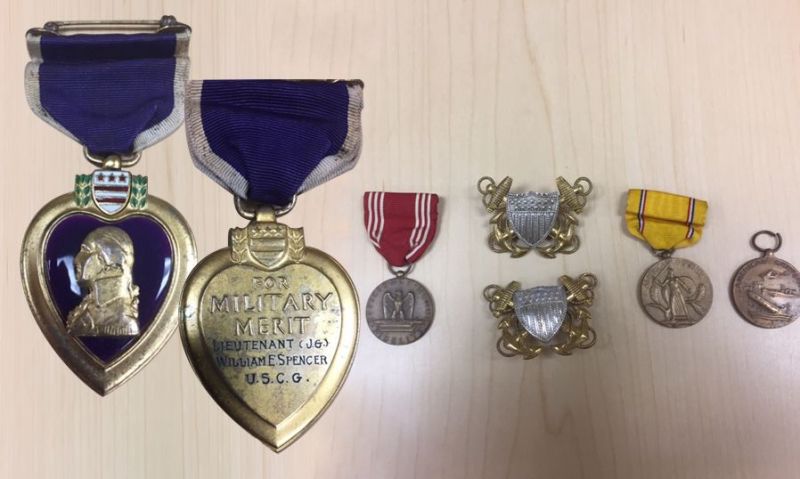 Recently a member of American Legion Post 166 in Goose Creek, S.C., came across a box containing four World War II medals, including a Purple Heart, and brought them into the post.

Don Pace – who during 42 years in The American Legion has served in post, district and department leadership positions – said the easy thing for the post to do would have been to put the box and medals “in a drawer and forgot about it.” But when the post saw a name engraved on the back of the Purple Heart, U.S. Coast Guard Lt. Junior Grade William E. Spencer, curiosity and a sense of duty prevailed over easy.

And thanks to Post 166’s efforts, Spencer’s medals will be returned to his family, appropriately enough, on Veterans Day. A relative living in Wilmington, N.C., will attend a ceremony at the post, where she’ll be presented with Spencer’s medals in a shadowbox.

“We thought that somewhere along the line there’s got to be a relative somewhere that would be glad to get these,” said Pace, currently serving as Post 166 commander. “That’s what inspired us to do it."

Enter Post 166 Legionnaire Michael Wolf, a genealogist, historical researcher and author of two Civil War books. Through his research he found that Spencer served aboard the USS Leopold, which served as an escort to merchant ships in the North Atlantic during World War II. On March 9, 1944, German submarine U-255 torpedoed and sunk the Leopold; Spencer was found frozen to death in a lifeboat the next day.

On that day the post will host a ceremony to present the medals. Including in the schedule will be the reading of the history of Spencer by Thomas, the presentation of the medals by an active-duty U.S. Coast Guard officer, a two-bell ceremony by Fleet Reserve Association Chapter 269, the presenting of the colors by Post 166’s honor guard, the playing of taps and the singing of “Amazing Grace.” Spencer’s relatives will be escorted to the post by Chapter 166’s American Legion Riders.

“We’re trying to cover every angle. We’re trying to make it something memorable,” Wolf said. “It’s going to be an event that’s different than most of our Veterans Day affairs.”

Locating the family members came out of what Wolf called a sense of duty. “(Post members) were adamant that we do everything within our power to return (the medals) to family members,” he said. “I jumped all over it. I said ‘if there’s something I can find that will help, I want to do it.’ It was a sense of duty from every person that saw (the medals) and had anything involved in it.”

Being able to reunite Spencer’s family with his medals “is as rewarding of an experience as I’ve ever had,” Wolf said. “He died in North Atlantic 76 years ago. And finally, he is getting a memorial service. That is absolutely rewarding right there. To have played a part in it, it’s humbling. Really, really heart-warming all the way across.”