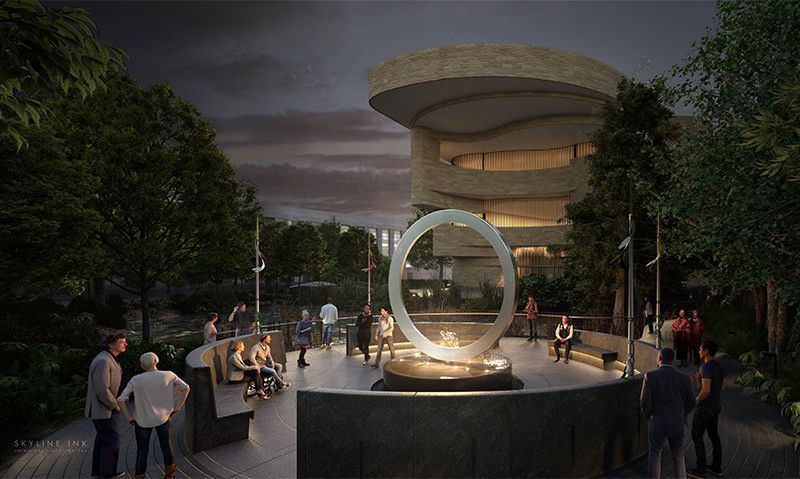 A virtual opening ceremony is scheduled on Veterans Day, Nov. 11, for the National Native American Veterans Memorial at the Smithsonian’s National Museum of the American Indian in Washington, D.C. The outdoor memorial, designed by Oklahoma American Legion Post 401 Commander Harvey Pratt, pays tribute to all native people who have served in the U.S. Armed Forces.

The opening ceremony will be presented online at https://americanindian.si.edu while an in-person event awaits the end of the COVID-19 pandemic and local restrictions on large gatherings.

“We are a nation of patriots who believe in the United States, its democracy, and our responsibility to preserve it for future generations,” the museum’s website explains of the project, authorized through legislation passed by Congress in 2013. “We acknowledge those who have served in the armed forces as the greatest patriots of all … many Americans are unaware of the exceptional service performed by American Indian, Native Hawaiian, and Alaska Native veterans.”

An online exhibition, “Why We Serve: Native Americans in the United States Armed Forces,” will also be presented on the museum’s website beginning Nov. 11, 2020.

Admission to the memorial is free and open 24 hours a day (except Dec. 25), but timed-entry passes are required for those who wish to visit it, until further notice. Those passes can be reserved on the museum website, along with public-health safety requirements for visitors.

Pratt, a Vietnam War combat Marine and Cheyenne chief who had an internationally acclaimed career in forensic art as a law-enforcement investigator, is featured in the November issue of The American Legion Magazine. His story and a video describing key elements of the memorial can be seen here.

The American Legion National Executive Committee passed a resolution at its Fall 2020 Meetings in October commending the memorial and its designer, stating that “Commander Pratt’s ‘Warriors’ Circle of Honor’ design captures the spirit, courage and legacy of Native American service in the U.S. Armed Forces.”