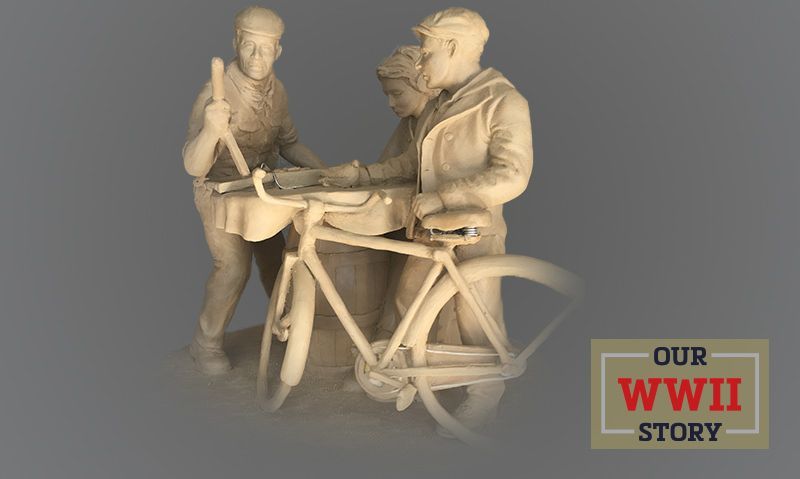 Retiring U.S. Special Forces Cpt. Joseph Ivanov spent part of the COVID-19 pandemic last spring indulging his passion for history by exploring elite, secret operations of World War II. What he found was something he believes has gone missing too long from the historical Normandy landscape where over 1 million visitors a year go to understand the complex matrix of heroism that enabled the June 6, 1944, breakthrough and ultimately led to the end of the Third Reich. The missing feature: a memorial to the French Resistance.

After watching a documentary on the 2012-dedicated U.S. Navy Monument on the Normandy coastline, created by American sculptor Steven Spears, Ivanov started making some calls. “It’s like 67 years later, and they put a monument at Utah Beach to commemorate Operation Neptune, what the Navy did,” Ivanov says. “How did we go so long without paying a tribute to these men and women? I think traditionally, just like it said in the documentary, Pacific Theater we look at that subconsciously as the Marine and Navy War. The Army and Army Air Corps had the ATO (Atlantic Theater of Operations). I guess it just kind of slipped away.”

The story of the French Resistance is one he does not want to see slip away, in part because he traces his own military lineage to that movement, which gave rise to the Special Operations Executive of Great Britain (SOE) and the U.S. Office of Strategic Services (OSS), which was forged into existence and led by one of The American Legion’s founding figures, William Donovan, considered the father of modern U.S. military intelligence.

One of the important calls he made after studying the French Forces of the Interior (FFI) was to Steven Spears, who designed the Navy Monument at Utah Beach. They met, and Spears was immediately excited about the project.

“I envisioned this three-tiered monument of a guerrilla, auxiliary and the underground,” Ivanov explained. “The guerrilla is the middle-aged man. The auxiliary is the young boy on the bicycle. The underground is the female pressing out a comms message, which was very authentic to what I read and the roles being played.”

Spears carved a scale-model maquette that portrays the three levels of the resistance, and Ivanov made contact with Operation Democracy of Locust Valley, N.Y., which has worked with The American Legion on various projects, including promotion of the Flags for Freedom program and annual commemorations of Allied landings in Normandy. Operation Democracy, which found the French Resistance memorial to be a perfect fit for its mission, gave the project a non-profit parent organization for tax-deductible contributions.

The pre-invasion shaping operations of the French Resistance, Ivanov says, were crucial to success on D-Day. He noted that French patriots reported German defense positions, produced and smuggled to England a massive map of the beachhead and cut enemy communications lines in advance of the landings. An estimated 1,000 German factories were sabotaged by the French Resistance during the war. Trains were derailed. Intelligence was passed along from children and women to Allied personnel in England and later in France. Around the D-Day window alone – June 4-6, 1944 – the French Resistance is credited for hundreds more acts of sabotage that enabled the Allies to storm the continent.

“It was all intel-driven up in the Normandy region,” Ivanov says. “That is the quick thing that happens when the word gets out that this monument is going in Normandy. They say, ‘Why there? There was no resistance there.’ I think it’s subjective. Absolutely, there was resistance there. People romanticize that if there weren’t guys running linear ambushes … it wasn’t resistance. Who was the resistance? It varied in size. In the beginning, those were the hard-liner guys who had a lot of guts.

“Whether you were supplying caches or passing messages, hiding people or moving them, that’s a big deal. You can’t run kinetic operations without that underlying support; therefore, the entire network and their lives are at risk.”

The French Resistance received military support – including weapons and training – from the British Special Operations Executive, formerly called the office of “ungentlemanly warfare” by British Prime Minister Winston Churchill. Donovan and the newly established OSS joined the effort as Allied “Jedburgh” teams jumped behind enemy lines in France, Belgium and the Netherlands to strengthen the resistance during German occupation and in the march to victory across Europe. The monument plan includes 93 bronze parachutes to represent the Jedburgh teams that jumped into Normandy, who typically consisted of one Brit (SOE), one American (OSS) and one French service member.

The number who actively participated in the French Resistance is uncertain – generally set at about 400,000 – and the definition of an official FFI member is debated. “In my opinion, if you moved a train sign, you were in the resistance,” Ivanov says. “If you caused any kind of disruption in movement of troops or passing of information, that’s a big deal.” If caught, members of the French Resistance were commonly tortured, sent to concentration camps and executed.

Even today, many French families whose ancestors were in the resistance don’t talk much about it. Memorials to their contribution in World War II are scattered and relatively small in France, Ivanov says. “Families are still very quiet about it. The nuances are deeper than you could ever get out of a book. You ask questions, and it’s a family secret. But if we don’t capture these stories, they’re gone forever.”

As he has worked on the concept, some former French Resistance participants and families “are coming forward,” Ivanov says. “That is happening. There’s going to be plenty of people at this (dedication).” He hopes to have the memorial finished and shipped to Normandy by June 2021, having personally funded the initial work. More can be learned about the project, including a video, at the Operation Democracy website at https://operationdemocracy.com/normandy-french-resistance-monument-project/.The video includes U.S. Army (ret.) Maj. Gen. John K. Singlaub, a 43-year member of The American Legion, who jumped behind enemy lines as a Jedburgh team operator.

“I think it is a wonderful idea to commission a monument to honor the FFI,” Singlaub says in the video about the project.

“Every year on June 6, people from around the world gather in the Normandy region to commemorate Operation Overlord and the liberation of Europe,” the Operation Democracy website states. “While many French people take part in this celebration and remembrance, most of the focus is on U.S., British, and Commonwealth efforts. It is time to honor the French Resistance’s sacrifices and contributions to the success of Operation Overlord. The Normandy French Resistance monument will honor the three components of the French Resistance: the guerrilla, the underground and the auxiliary.”

Ivanov noted that the French remain to this day devoted supporters of U.S. military sacrifice during World War II, leading annual June celebrations to commemorate the liberation. “I can’t get over how much awe I am in about what the French do for our veterans,” he says. “You bring the Americans in – and all these Allied veterans – once a year into Normandy. I can’t put into words how great the French do in putting on their hosting hat. All they want to do is celebrate those veterans. That’s awesome. But you start to think, what about what you did? Who is doing anything for you?”

He hopes the monument will help complete the story of D-Day and send a message to future generations of visitors to Normandy. “I really hope this is a catalyst to bring more of this collective history to the forefront, to tell the bigger part of this story, so it’s not lost. Understanding what true patriotism is – we throw that around a lot – the story of the French Resistance is really true patriotism. It’s when the chips are down, and you’ve got nothing. Who is coming to make a difference? I want that story to be told. I want it to be embraced. I want that sacrifice to be remembered – something for the French to be proud of – for them to understand that they are just as important, and they need to be honored.”