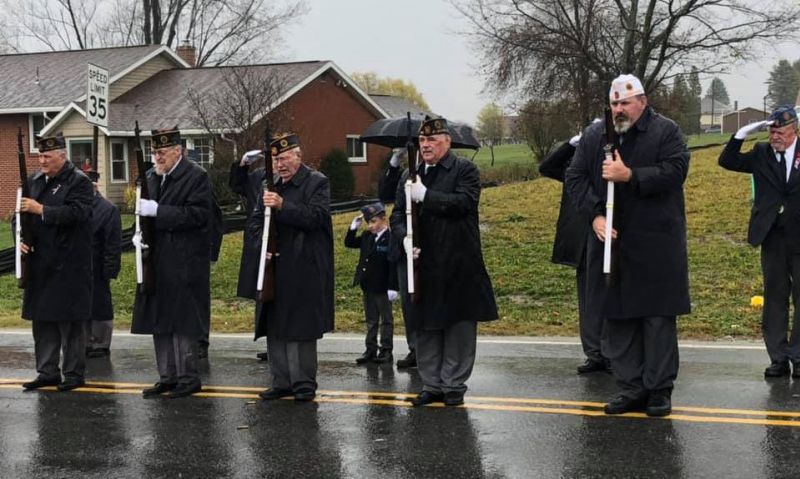 This year, Veterans Day in Johnstown, Pa., was a wet affair, with a steady rain hitting the city most of the day.

Both were a part of Post 551’s honor guard that, despite the rain and coronavirus restrictions, took part in five short Veterans Day ceremonies in the morning and then then annual Veterans Day parade in Johnstown later in the day.

Seeing C.J. as part of a post’s effort is a source of pride for Doug, a Paid-Up-For-Life member of Post 551 who has served as post and district commander and currently is the department’s Western Section adjutant. “It’s a very proud moment, and it’s great to share that with him,” he said. “It’s not like we sat him down and said ‘this is what you need to do.’ He picked this up from being at events … and seeing how the other veterans act around these events.”

C.J., a first grader at Forest Hills Elementary and member of the Sons since birth, isn’t a huge fan of talking on the phone. But he did say he enjoys marching with his dad and other veterans and wasn’t bothered by the rain. He also enjoys honoring other veterans.

Jackie, Doug’s wife and C.J.’s mother, said the family is steeped in military tradition. In addition to Doug retiring from the U.S. Air Force in 2014 after a 24-year career, his father was in the Army. Jackie’s father served in the Navy, as was her brother.

“We have quite a few veterans in our family,” Jackie said. “I get tears in my eyes most of the day on Veterans Day. And C.J. has been participating in things like this since he was 2. I think the first picture we have of him saluting next to his dad, I think he was 3.

“He’s been doing things all along that make you have that warm, fuzzy feeling. We were watching a NASCAR race one day on TV, and some people around us were talking during the national anthem. And he looked at me and said ‘mom, why are they talking during the flag song?’”

On Veterans Day C.J. joined with Post 551’s honor guard for short ceremonies at five different local memorials before ending up at the post for a final ceremony – all in the rain. But that didn’t stop the group from heading to Johnstown that afternoon for the parade.

“We actually came home (in between) and threw all the uniforms in the dryer so we could get ready to go down to the parade, where it rained again,” said Jackie.

Doug said while C.J. chooses to take part in the post’s events, it’s a choice that has its benefits. “It’s a real good foundation for learning that people made sacrifices so that you have what you have today: your freedoms and that the flag means something,” Doug said. “It’s not just a piece of cloth. It means something. And people dedicated their lives to protecting this country and making it nice for the next generation.”