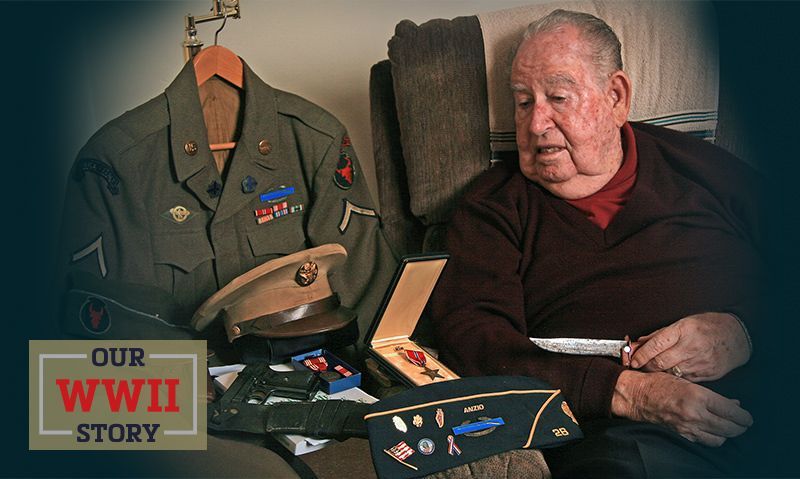 “One day, I looked down a small valley very near a bombed-out, dirty hut that we were lucky to find deserted. We had holed up there temporarily. I saw tanks from the 1st Armored Tank Division not far away … What I also saw down in that valley was a beautiful white sow hog. She was eating grass. I guessed her weight at about 300 pounds.”

- Harold Hammil of Lawrenceville, Ill., writing in “Please, Jesus, Give Me Three More Minutes to Live,” a 2004 memoir of his time fighting in World War II

Tucked inside the March 2008 American Legion Magazine is the remembrance of an Illinois farm boy whose Thanksgivings growing up at home typically involved hog slaughtering and butchering. “Usually, we had an uncle who would come help us, too,” Harold Hammil reflected in the piece, “A Farm Boy at War,” adapted from his book-length memoir.

In 1943, Pvt. Hammil’s 34th Division 135th Infantry Regiment platoon was so far up front that supplies and food could not reach them. Too dangerous, they were told from the rear. By then, well into 300 days of nearly continuous combat, Hamill didn’t know what part of war wasn’t dangerous. He had already fought in North Africa and was now pressing through German-occupied Italy. As if constant enemy fire were not enough, the young soldiers in his platoon were starving and cold.

Hammil wrote that the white hog’s appearance was like a miracle, one of many he attributed to the hand of God during his combat experience.

“I was the only farm boy in our platoon who knew anything about killing and butchering a hog,” he recalled. The others, he explained, “were all city boys.”

His family’s farm in Illinois would ship 100 or more feeder pigs from eight or nine sows to the St. Louis stockyards every six months, he said, adding that “we always butchered our own meat. I knew what to do with the sow.”

The hog ambled in and out of view ahead of the soldiers, but they could not shoot it right away, concerned any rifle fire would give up their position. “We didn’t have to wait more than five minutes,” Hammil recounted. “Three German artillery shells – incoming mail. I went down in the valley to get a closer shot. I shot her just above the line between both eyes, as we always did on the farm. My dad had taught me that many years earlier, while I was still in high school.”

The young soldier also had attached to his belt a long-bladed knife that his father had made especially for him before he deployed. “I took the knife out and slit the throat of this sow so that the blood would drain out quickly and not settle in the meat and spoil it. This I also learned on the farm, helping my dad butcher hogs every fall.”

The city boys watched in awe as Hammil went to work. Once he was done, he told the others to “cut off the piece of meat you want, anytime you want.” It was cold and snowy, “our own walk-in cooler … We were very lucky.”

No one else knew, however, where to cut “to get any certain piece of meat. I had to show them where to find the ham, shoulder, pork chops or bacon. I was also the only one in our platoon who had been a Boy Scout. I hate to think what that hog meat would have looked like if they had killed and butchered it on their own. I am sure that it would have all been ruined. But we still did not have a frying pan to cook it.”

Hammil looked everywhere. The soldiers rooted through their gear and searched the shack. All they could come up with was a porcelain toilet, the type of which “most of us had in our bedrooms at the time before running water and indoor plumbing … I looked at it sadly. I knew I had to make a skillet out of this thing somehow, or killing the hog would have been useless. All this fine meat we needed to survive would have been lost.

“So, I cut the bottom part of the potty off with my long knife and kept the small bottom piece and about two inches of the top rim to keep the meat and grease in. I used a rock and my knife to puncture the pot and hammered the knife blade all around until I had a low, shallow container.”

However, he related, the toilet-turned-skillet was dirty. “That was a problem. E. coli could make us very sick – or worse, kill us. So, I wiped it out with snow and dirt as best I could. Then I filled it with water and boiled it over our small GI-issue Coleman gas stove. We always had it with us but seldom used it. After boiling it three times, I figured it was sterilized enough for safe use. It was a terrible-looking skillet.”

Hammil then began to cut from the hog and started frying the meat. He showed others as soldiers from other units came into their position. “We soon became very popular with the runners who passed by, delivering messages to company commanders from regimental headquarters.

“Word quickly drifted down to the kitchen crew in the rear that we had butchered a fat hog and were enjoying it immensely. Our mess sergeants sent word that if we could send it back in a Jeep they would have the kitchen crew make us some sandwiches and send them back to us. There were about 15 to 20 men back in that kitchen and the motor pool squad, and I am sure we would have been lucky to have gotten back one sandwich apiece. This was the same group that said it was too dangerous for them to send a Jeep to bring us any cans of C-rations. I took a vote. All the other boys said, ‘Hell no. They’ve never worried about us before. All they want is our fresh meat. Tell them no.’”

Hammil kept that knife for the rest of his life. “Every day I look at it, I can see in my mind that beautiful 300-pound white sow in the valley,” he wrote in 2008. “It still bothers me when I see an old white porcelain potty for sale at an antique or garage sale. I just look away and pretend I never saw it. So many little insignificant things bring back memories.”

Memories like that also deepened his faith, he said, “because of the many moments during the war when out of nowhere, somehow, miraculously, something like a 300-pound white sow could appear within shooting distance of a farm boy from Illinois who knew what to do with it.”

Following his discharge in 1945, Hammil had a successful career as a chiropractor and was a member of The American Legion in Lawrenceville. He died in 2012 at age 89, having received multiple combat decorations, including the Bronze Star, from his time on the front lines of World War II.