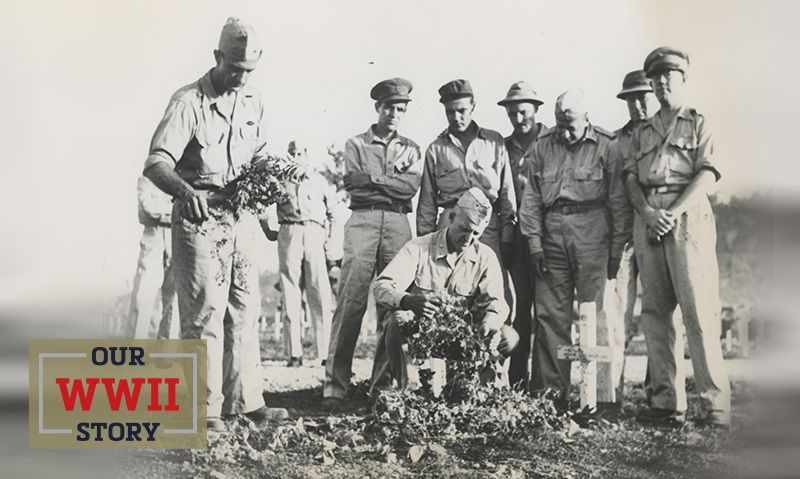 - American Legion Past National Commander and former U.S. Ambassador Hanford MacNider, speaking three months before the Japanese attack on Pearl Harbor in 1941; he would go on to command the Buna Task Force in New Guinea during World War II, sustaining two wounds, and lead the 158th Regimental Combat Team in the liberation of the Philippines.

Hanford MacNider of Mason City, Iowa, was chasing Pancho Villa in the Mexican Border War five years after he graduated from Harvard. He sprang from the Iowa National Guard into the regular Army, enlisting as a private in 1917, to ultimately lead and fight in World War I, where he received no fewer than 14 medals for combat bravery, earning battlefield commissions that left him a lieutenant colonel at the time of the Nov. 11, 1918, armistice.

After the war, at age 31, he was elected The American Legion’s third national commander, later making history as the past national commander who devised the “Iowa Idea” that led to hundreds of veteran-led community-development projects across the country, including swimming pools, parks, theaters and sports facilities.

He was assistant secretary of war in the Coolidge administration and later was appointed U.S. ambassador to Canada. He was in the running to become vice president of the United States as a Republican in 1932 and was a U.S. presidential candidate in 1940.

But as the Axis powers were spreading across Europe, China and the South Pacific, MacNider wasn’t so sure the United States should enter World War II. He was part of the America First Committee, and he was not alone. The famed aviator Charles Lindbergh was one of the isolationist group’s key leaders and supporters, and future U.S. President Gerald Ford was among its charter members. The group, established in 1940, grew to more than 800,000 but disbanded quickly after the Dec. 7, 1941, Japanese attack on Pearl Harbor.

A year prior to that, MacNider had testified before Congress that sending military weapons and aid to Great Britain in its fight against Nazi Germany looked like a national security mistake to him. “If the emergency is half as grave as the president’s spokesmen say it is, stripping our Army and Navy of their weapons at such a time would be nothing short of treason,” MacNider told lawmakers.

But just before Pearl Harbor, MacNider did an about-face and quit the committee, which dissolved on Dec. 10, 1941. The highly decorated combat veteran of World War I was soon on his way to the Pacific Theater, a newly commissioned colonel. “This America Firster is in Australia,” he reportedly wrote to a fellow Legionnaire who opposed U.S. entry in World War II. “Where are you?”

MacNider’s combat leadership record showed no reservations about U.S. involvement in the war.

He led troops of the 32nd Division in the invasion of Buna, New Guinea, where on Nov. 23, 1942, he took eight shrapnel wounds from a Japanese hand grenade that killed one nearby U.S. soldier. MacNider nearly lost sight in his left eye from the attack but once recovered, he was back in action, on the front lines, leading the 158th Infantry Regiment Combat Team – known as the “Bushmasters” – in multiple deadly engagements in the South Pacific under Gen. Douglas MacArthur.

In the August 1945 American Legion Magazine, war correspondent Boyd B. Stutler described MacNider in World War II as “tough, lean, wiry, and for all of his fifty-odd years, the ‘He Bushmaster,’ as one of his men called him admiringly, MacNider can out-climb, out-drive, out-walk, out-talk and probably out-fight any man in his outfit. While Cpl. James D. Gottlob, Big Timber, Mont., is nominally his driver, the general does his own driving – and how! – navigating his jeep over the most unjeepable roads, through heavy jungles and up steep hillsides.”

Stutler wrote that MacNider could easily have pulled less dangerous duty in the war. “When Mr. Hirohito of Tokyo made his big mistake in attacking Uncle Sam at Pearl Harbor, Hanford MacNider, then holding a reserve commission as colonel … was one of the first to ask for active duty – he didn't want a desk job at Washington – he was a field soldier, and he wanted to be with combat troops in the field, the tougher the spot the better for him. Washington lent a receptive ear, and Col. MacNider was placed on the active list and ordered to Australia with the first contingent, shipping out of New York on Jan. 23, 1942.”

After briefly serving on MacArthur’s staff, MacNider took command in September 1942 of the 128th Task Force in the first airborne troop movement of the Buna campaign where he was wounded two months later. When he recovered, he led Combined Operations Service Command, as a brigadier general.

“His chance to go with combat troops again came in early 1944 when he was given the assignment as deputy commander, United States Forces in the Admiralties, and attached to the 1st Cavalry Division – an outfit that got its baptism of fire in the Admiralties, added to its fame in the Leyte campaign, and won immortal glory as the rescuer of Manila in the Luzon campaign,” Stutler wrote.

In August 1944, MacNider assumed command of the 158th Regimental Combat Team, then stationed on Noemfoor Island, Dutch New Guinea. His soldiers rooted out enemy forces in the hills and caves – recording more than 1,000 enemy casualties and more than 600 prisoners – “all preparatory to a head start in the big show for the liberation of the Philippines,” Stutler wrote.

On Jan. 11, 1945, the Bushmasters stormed ashore as part of the Lingayen Gulf invasion. The team’s mission, wrote Stutler, “was to proceed by way of Rabon and Damortis to close the highway leading through Rosario to Baguio, the summer capital of the Philippines, where Gen. Yamashita had established his headquarters.” There, they fought desperate Japanese machine gunners and snipers who had lost the beachhead, fled to the hills, repositioned themselves but soon lost the critical mountain pass. “Road now open,” MacNider radioed back to headquarters. “Forever Amber Pass now in the hands of the Bushmasters.”

MacNider’s collection of combat decorations grew as the war in the Pacific drew closer to an end. “In addition to all the honors and decorations that came to him in the First World War, as National Commander of The American Legion, and in public life, he will have a second Oak Leaf Cluster on his Distinguished Service Cross, a Cluster on his Purple Heart, the Legion of Merit and a Bronze Star to wear on occasions of ceremony when the war is over,” Stutler wrote.

MacNider retired from military service in 1951 and died on Feb. 17, 1968, during a winter vacation in Florida. He was the oldest living past national commander of The American Legion at the time of his death. His obituary further points out that “only (World War I) General of the Armies John J. Pershing was awarded more medals than Gen. MacNider. He was also the first general officer to be wounded in the Pacific Theater during World War II.”