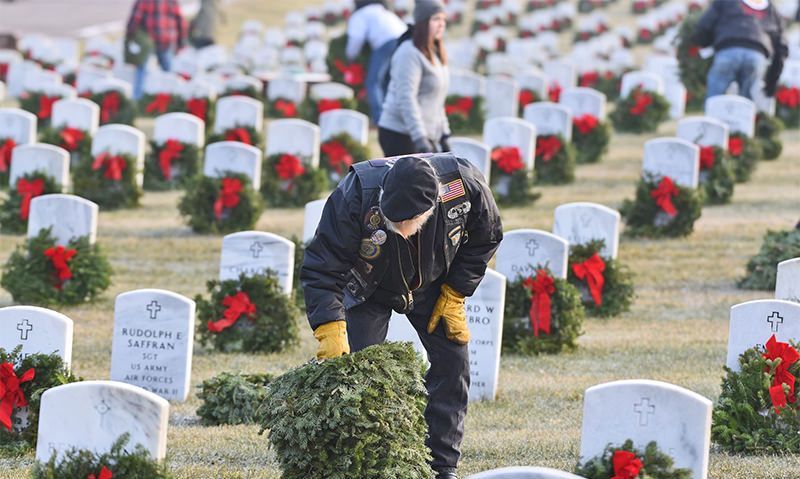 For the third straight year, the fundraising efforts of Wisconsin’s District 8 American Legion Riders ensured that a wreath was placed on every grave at the cemetery – more than 7,200 – through Wreaths Across America.

The effort has been spearheaded by Past State American Legion Riders Director and Palmer-Ritchie-Thomas Post 153 Legionnaire Ray McSherry and his wife Evelyn. And they weren’t going to let a global pandemic get in the way of carrying out their mission this year.

“We were going to do whatever we had to do to raise that money again this year,” said Evelyn, a member of Auxiliary Unit 153 and an American Legion Rider. “We’re very, very fortunate, after doing this for nine years, to have continuous support from the donors that donate year after year. It’s never occurred to me to not do it again, because it seems to be very, very important to the donors that they participate every year. They all have their own reasons for why they participate, and I think if Ray and I had decided not to do it this year, it would probably have been very disappointing for the people that support us.”

Normally up to 500 volunteers attend the event to help place the wreaths, but COVID-19 restrictions limited that amount to less than 100 this year. But Evelyn said those in attendance still managed to place all the wreaths in around 45 minutes. The weather cooperated, with normal Wisconsin snow and sub-freezing temperatures being replaced by sun and temps in the mid-30s.

“The weather helped tremendously,” Evelyn said. “And it was the same people that usually come every year to help support us, as far as the veterans groups, and that’s who was there. And they pretty much know what’s expected of them.”

Since 2012, the District 8 Legion Riders have been ensuring wreaths were placed at the King cemetery. But Evelyn said the effort is one supported from every facet of the Wisconsin American Legion Family, as well as other donors.

“The Legion Riders were so supportive this year because they knew were going to have some problems,” she said. “Every one of the districts in the state were very supportive of us. And the Legion posts and Auxiliary units are some of biggest supporters, so that helps tremendously – even down to the smallest rural posts and Auxiliary units that can afford to send us $30, $50 – they’re there every year for us, and boy, we appreciate every one of them.”

With the coronavirus affecting both public gatherings and the financial well-being of Americans across the nation, Evelyn said being able to cover every grave was extra special this year. “We were very touched with the fact we were able to cover every headstone,” she said. “When it was all done and the wreaths were on every headstone, we were emotionally moved it was covered in such a difficult year.”

Throughout the nation, American Legion Family members either sponsored or took part in Wreaths Across America (WAA) events, included those listed below. If your post, unit, squadron or chapter were involved in similar efforts, please share it via www.legiontown.org.

In Cloverdale, Sons of the American Legion Squadron 293 hosted its annual Wreaths Across America event, teaming up with Veterans of Foreign Wars Post 9268. A small ceremony took place at the Native American Cemetery, followed with the placing of approximately 63 wreaths at the Cloverdale Cemetery.

• In Alton, members of American Legion Post 199 in Edwardsville took part in the Wreaths Across America event at Alton National Cemetery that placed more than 500 wreaths. The event was closed to the public, but a video of the ceremony was made available from State Rep. Amy Elik and State Sen. Rachelle Crowe. "It's important for me to do this, because this is what we need to do," Post 199 Senior Vice Commander and Illinois District 22 Junior Vice Commander Ron Swain told Riverbender.com, "because I have family members that are deceased, that I want to make sure it gets done right, and they're not around here, so I want to help every family here, make sure their fallen soldier gets a wreath for each year."

• In Quincy, American Legion Post 37 helped place wreaths at Quincy National Cemetery. "I think it's incredibly important that youth be reminded of the sacrifices people have made to get our country to where it is today and this is one way to do that," Post 37 Finance Officer Paul Havermale told WGEM. “Having the wherewithal to come out on a cold day and honor our veterans and fallen heroes is just very heartwarming for any veteran.”

In Belfast, Sons of The American Legion Squadron 43 teamed up with Veterans of Foreign Wars Post 3108 and the Patriot Riders of America Chapter 5 of Waldo County for the Wreaths Across America events at Grove Cemetery and Old Unity Cemetery.

At Memorial Park Cemetery in Columbia, Herbert Williams American Legion Post 202 assisted with the Wreaths Across America effort, supplying the playing of Taps and a 21-gun salute.

In Elwood, American Legion Post 290 held a Wreaths Across America event at the Elwood Cemetery that included a ceremony and laying of wreaths.

In Pikeville, members of American Legion Post 541 and volunteers placed 180 wreaths at Pikeville Cemetery. The post conducted a brief ceremony prior to the placing of wreaths.

• In Girard, a Wreaths Across America ceremony at Girard-Liberty Union Cemetery led off the placing of more than 500 wreaths. The event’s master of ceremonies was American Legion Post 235 Legionnaire Kevin Hubler. “Lying here before us and in cemeteries throughout the nation are men and women who gave their lives so that we can live in freedom and without fear,” Hubler said in his remarks. “We thank those who gave their lives to keep us free and shall not forget you. Today, many of you here are veterans of wars and conflicts that America has had to fight to protect the innocent and oppressed. … Many of you here today have answered that call and served your country well. We are here today to say thank you, and we are honored to know you.”

• In St. Marys, American Legion Post 323 joined with others for a WAA program at Memorial Park.

In Paris, America Legion Post 10 took part in the placing of around 250 wreaths at the Paris Cemetery. Post 10’s honor guard placed a wreath on the gravesite of Uriah H. Brown, a Civil War veteran and Medal of Honor recipient.

Wreaths were placed on the graves of 44 veterans at the Cooley Springs Baptist Church cemetery in Chesnee to honor their sacrifice and service. A ceremony at the cemetery was hosted by American Legion Post 48, while American Legion Post 200’s honor guard played Taps and performed a 21-gun salute.

"The ceremony humbles you and makes all of us proud to be Americans,” Post 48 Legionnaire Johnny Marlor told GoUpstate.com.

In Lufkin at the Garden of Memories Memorial Park Cemetery, around 570 wreaths were placed to honor the veterans buried there. Members of Post 113’s American Legion Family took part in a ceremony in the cemetery chapel.

“Even though the crowd was a lot smaller this year, I was glad to see the ones here,” Auxiliary Unit 113 President Rita Redd told KTRE.

In Henrico County, all 1,444 veteran graves in Seven Pines National Cemetery had wreaths placed on them, thanks to fundraising efforts by American Legion Post 242 in Sandston.

The post has hosted the event for four years and has ensured every veterans’ grave was honored for the past three years. Volunteers assisted in the placing of the wreaths.