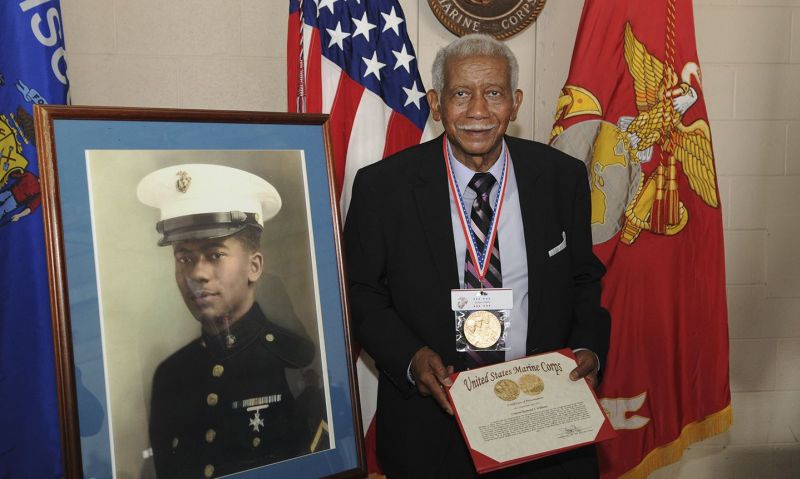 Raymond Williams was one of the first Black Americans to integrate the U.S. Marine Corps. (Photo provided)

As we enter February, designated Black History Month, I urge everyone to rethink this month. I think of it as celebrating the contributions of Black Americans to American history. I want us all to think of this month as a way to celebrate the service of Black Americans who have fought and died on foreign soil and on American soil to make sure the America we love, lives up to the ideals of our founding fathers.

As a Black American veteran, I know that I stand on the shoulders of giants who have paved the way for me. I am both grateful for the path they have laid and aware that it is my responsibility to pave the way for others who come after me.

As a Black American and a veteran, I know that deeply ingrained in us are both the horrors we have endured in America and the pride in which we have continuously and faithfully served her. The history of my own family is but one example. My grandfather answered the call to arms when our nation needed him. James Waiters Sr. of New Orleans was enlisted into the U.S. Army and went overseas for his country during World War I. He never got the opportunity to fight for his country because at the time our country denied him that opportunity. At that time our young country still had much to learn about living up to the ideals upon which it was founded. My grandfather served honorably, came home after the war, found work, took a wife and raised a family.

My grandmother’s youngest brother, Raymond Williams, also served our country when he enlisted in the U.S. Marine Corps and trained at Montford Point making him one of the first Black Americans to integrate the Marine Corps. He also served honorably, returned home and raised a family.

Both of these men raised families that contributed to this nation in the armed services, then continued to serve as police officers, teachers, Peace Corps volunteers and many other ways. My family is no different than many other American families in its commitment to service to this nation.

The difference may be that my grandfather and great uncle proudly and willingly served our nation in spite of the treatment towards Black Americans, particularly, but not exclusively, in the southern United States. These men instilled in my family the love of country, people and service to this nation. They believed that their service would pave the way toward making equality a reality as opposed to an idea.

Black Americans like my grandfather and great uncle have long believed that service to this nation in time of need would force America to live up to the ideals that its founding fathers wrote of but did not implement in their time. The men of my family believed that war and service would be transformative for America. After all, how could any nation expect its citizens to go abroad and fight for democracy and then continue to deny democracy to those very citizens who risked their lives for the “American” way of life. My grandfather and great uncle were right. Their service was transformative for America but what they did not realize was though the fight over there was over it was just beginning at home.

The great fight for civil rights in America, one of America’s greatest fights, began as a result of Black Americans who after serving abroad in the most elite fighting force the world has ever known, came home after both WWI and WWII and were denied the democracy in their own country. After both world wars, for Black Americans, merely wearing their uniform could get them killed or maimed for life, not by an enemy but by other Americans. Those acts and the understanding that America could not go back to what it was but must move forward was the catalyst for men like Charles Houston, Medgar Evers, Ralph Abernathy, and many other icons of the civil rights movement who served in uniform to organize and fight not just for themselves but for the soul of America itself.

The men and women who fought for civil rights for all Americans, believed in and loved America in spite of her faults. These men and women fought, for the democracy that America believes in and cherishes. Those who fought for civil rights felt called to action to defend their country. When those whose minds they sought to change took up arms against them, they did not run from the fight. They forged ahead. The battles these veterans fought, eventually won over the hearts and minds of their adversaries and in 1964 the Civil Rights act was signed into law, followed in 1965 by the Voting Rights Act.

I am grateful to both of these Black Americans for their contributions not to Black History but to the history of our nation. I am proud to be Black and proud to be an American and I am grateful to my grandfather, great uncle and others who lifted us all up to make this a better America. God bless America and all its people.