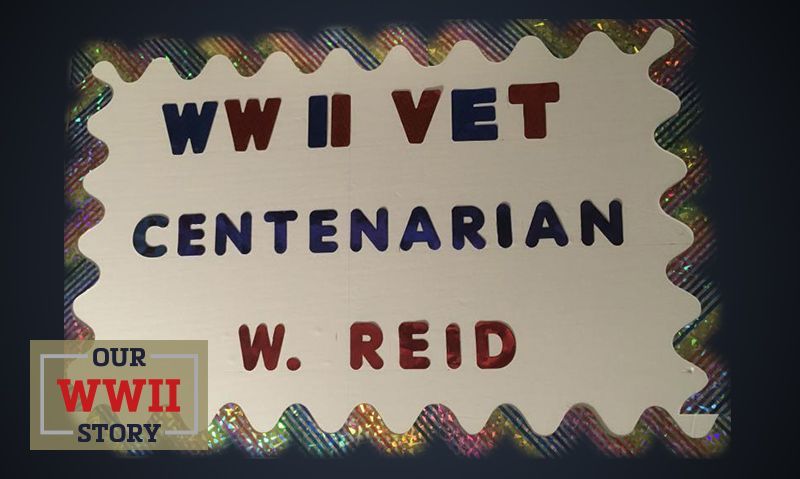 [Editor’s note: this story was submitted to Legiontown in the summer of 2020.]

In addition to being a World War II veteran, William J. Reid is also the oldest member of American Legion Post 74, District 12, Chesterfield, S.C. He celebrated his 100th birthday in November 2019. Reid served three years in the U.S. Army, 1943–1946, after being drafted in Fort Washington, N.Y., where he was living at the time. He was honored by the South Carolina General Assembly, 123rd Session, 2019, H.4216, "for his outstanding contributions to his community and the state of South Carolina."

This is his story as told to then-Post 74 historian/commander Emanuel Hough.

“I had never heard anything about Pearl Harbor. I never will forget that it was on a Sunday afternoon, and I was in the butler’s pantry at the house where I was working, getting ready to serve lunch. Some of the family was already seated. There was a radio in the pantry, and it came over the radio that the Japanese had bombed Pearl Harbor just before 8 o’clock that morning, Dec. 7, 1941. That was the first time I had ever heard of Pearl Harbor or anything about it.

“I had gone to Newport News, Va., and was working in construction in the shipyards. I was working on USS Yorktown, one of 24 aircraft carriers built during World War II for the United States Navy. I had avoided the draft for a while, but after they reached me I went back to Grand Central and was drafted on April 27, 1943. From there, I went to Camp Upton, N.Y. This camp had been created in 1917 to house troops who were waiting for ships for their overseas deployment. I stayed there for a few days before being shipped out. I went to Camp Hood, Texas, for basic training. Camp Hood was made up of two camps, North Camp and South Camp. My outfit was the 659th Tank Destroyer Battalion. It was formed on May 15, 1943, at Camp Hood and disbanded on Dec. 1, 1944. The 659th was one of the few African-American tank destroyer units.

My next assignment was with the 693rd Combat Engineers at Camp Shelby, Miss. During wartime, the camp’s mission was to serve as a major independent mobilization station of the United States Army Forces Command. From there, I went to Camp Livingston, La. Next, my unit received orders to ship out to Fort Lawton, Wash. By the time we reached Fort Lawton, the European theater was over. The rumor was that we were going to ship to the South Pacific. Instead, the unit went to Fort Ord, Calif. There was a shortage of local farm help in the area, so the soldiers in the unit could work during our off time at Spreckels Sugar Mill to make extra money. Next, my unit went to Fort Bragg, N.C.

From there, we went by rail to Fort Knox, Ky. A funny incident was that when we got to Hamlet, N.C, I told my sergeant that I was going to jump off the train when it went through Cheraw, S.C., and would follow them later. Well, I went to sleep after we boarded and did not wake up until the train reached Atlanta. From there we went to Fort Knox. That’s where I was discharged on Dec. 7, 1946.

In Company B, 659th Tank Destroyer Battalion, the company commander was slow about promoting his men. Soldiers in Company C who had come into the military at the same time were given promotions much more quickly. My platoon sergeant was rough. For the most part, in the military, it was good. I didn’t do anything out of the ordinary. I did what I was told to do.

After I got discharged, and thought back, I saw that the fellows who had an education were getting promoted. I didn’t want to go back to school with the folks who were children when I left home. I had to do something; so in 1946, I wondered what I could do to make a living and have status over the long haul. I took advantage of the GI Bill and enrolled in a program of Mortuary Science at Eckels College of Mortuary Science in Philadelphia. In November, I came on home and went on to do my apprenticeship at Johnson’s Funeral Home in Columbia, S.C. In 1947, I left Johnson’s and a cousin of mine and I opened a mortuary here in Cheraw on Oct. 26, 1947. He had the money and I had the know-how. We didn’t have much business because we were competing with Morris Funeral Home, which had been here a long time. Our business burned down, and when we got the insurance money he took his share and left. Sadly, all of my military pictures and memorabilia were in the building when it burned. I rebuilt and have been here since then, working in the Cheraw community.

Being in the military helped me gain a perspective of life I would not have ordinarily had. You learned acceptance of authority; you learned cooperation; you learned how to lead and to follow. The combination of those things, for me, made me a better person because if you didn’t know how to accept authority and cooperate, you didn’t get along at that time. First of all, it was segregated. Secondly, the officers over most Black units were white. The noncommissioned officers were just tough. You went through some things at that time that are unheard of now. I hear people in the military now talking about how they went to work at such and such a time, and I say, “That didn’t happen, not during that time.” Reveille was 5 or 6 o’clock or when the first sergeant called it. Retreat, sometimes, but most of the time you were training and learning how to fight war.

Regarding my longevity, clarity of mind and physical health: the first, I think, above and beyond anything else you have to have good religion. When I was coming up, we believed that it took a village to raise a child. A whole lot of folks helped to raise a child. At Wesley Methodist Church, if you got caught out of line, other folks helped correct you. Sometimes, I find myself thinking about the ladies and the men from Wesley. They had influence on my life. Not only that, it wasn’t just at Wesley, it was wherever you got caught out of line that you got your chastisement.

When I first joined The American Legion, there were two posts in Chesterfield; one was for Blacks and one was for whites. When the posts came together, it was definitely a benefit. Ours was dying completely out, except that we integrated and combined. That was what saved our post. I wish I could participate more, but I can’t. Being in the military was a great experience, and I do believe every young man ought to have the experience of at least one year in the military. Most of all it teaches discipline, and that discipline will help you through everything you do.”