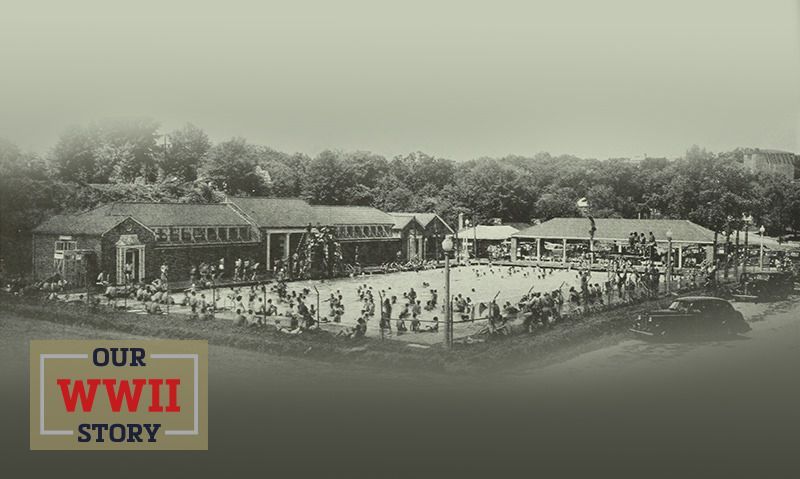 By October 1942, some 4,000 young soldiers and sailors were training in and around Athens, Ga., in preparation to fight in World War II. And since the mid-1920s, The American Legion had made a concerted effort to promote fitness and outdoor exercise in communities across the country. The Works Progress Administration and the Public Works Administration and local Legionnaires raised money, supplied materials and worked to bring Legion Pool into existence on June 7, 1936.

Those realities intersected when World War II was not yet a year old, and Allen R. Fleming Jr. Post 20 in Athens offered up its 475,000-gallon, modern swimming pool for the training of U.S. Navy cadets going through pre-flight school at the University of Georgia. Some 2,000 cadets, with a monthly turnover rate of about 600, were going through the program. The U.S. Army’s Fourth Corps Signal School was also in Athens, where some 1,200 soldiers were continuously trained in radio mechanics and code.

Post 20 was a magnet for the young troops, which was open to all members of the U.S. Armed Forces, as a recreation center and a free place to swim and relax.

“The Athens Legion center lies in a natural amphitheater between the residential section and the business center of the town and is convenient to the dormitories in which the naval cadets are stationed,” The October 1942 American Legion Magazine noted. “Six-hundred of these cadets receive swimming instruction daily in the Legion pool as a part of the physical training program.”

The magazine described the Athens post’s swimming facility as “one of the finest outdoor pools in the South. It is 150 feet long by 75 feet wide and can accommodate 1,500 swimmers each day without too much crowding.”

The already well-furnished post home, in a big log cabin, was refurbished to welcome the young trainees “with new games, writing facilities and magazines and books. The grounds are being equipped with shuffleboards, horseshoe courts and other outdoor games.”

The post’s American Legion Auxiliary unit, meanwhile, organized a dance under a pavilion near the pool every Saturday evening for the Army and Navy personnel training nearby.

The gesture, Post Commander Edgar L. Eberhart Sr., said at the time “will be continued as long as we have service men stationed in Athens.”

The relationship with the Navy continued until 1944 when a field house and pool were built elsewhere on campus.

The Legion Pool was acquired by the University of Georgia in the mid-1970s and was on the block for demolition and replacement in 2012. The historic but leaky facility was saved after vocal opposition to its removal, and it remains – after many repairs and renovations – the only outdoor pool on the university campus, available to students, faculty, staff and their families.