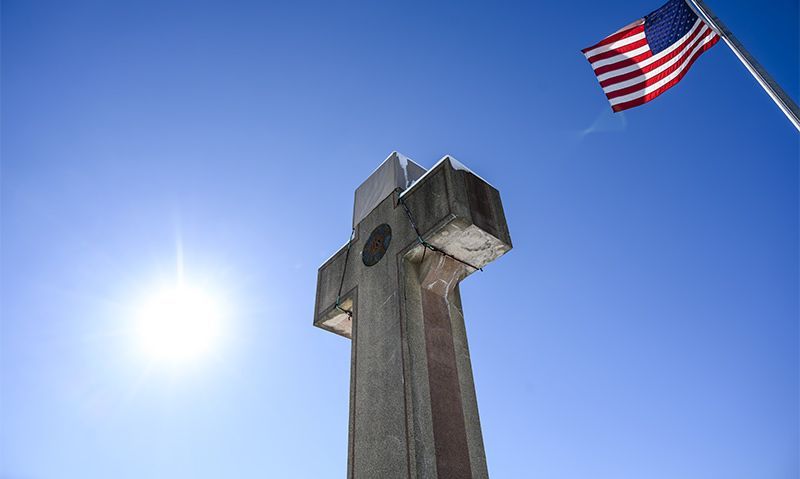 Michael Moore is on a new mission for the Bladensburg World War I Veterans Memorial, often referred to as the Peace Cross.

As commander of American Legion Post 136 in Greenbelt, Md., Moore was among those involved in defending the memorial that honors 49 veterans killed during World War I from being removed from where it has stood since 1925 in Prince George’s County. In a landmark ruling in June 2019, the U.S. Supreme Court ruled that it did not violate the First Amendment and could remain.

Now, Moore is leading the way to raise $1 million to have the memorial restored.

Over time, the 40-foot memorial has been struck by lightning, rained on and sustained damage from flooding. Vehicles have also hit the memorial, which sits in the middle of a traffic circle.

The memorial, which has a tarp at the top protecting it from additional damage, is overseen and maintained by the Maryland-National Capital Park and Planning Commission, Department of Parks and Recreation. During the five-year court battle, the department was banned from making improvements.

“It’s had a lot of wear and tear,” Moore said. “It’s been listed on the National Register of Historic Places. The problem is that it is in dreadful shape.”

Worcester Eisenbrandt, which did work for the Tomb of the Unknown Soldier, is handling the work. The estimate for the project cost is $1 million.

“It seems like a lot of money,” Moore said. “I asked whether we were asking for a Cadillac or a Chevrolet. I was assured by the contractor and the department of planning that this is what we need to have it restored for the next 100 years.”

So far, about two-thirds of the funding has been raised, mostly from the Maryland Legislature and state governor. Additional contributions have come from American Legion posts and Riders, other community groups and individuals.

“It’s a huge deal,” he said of the community support. “The word ‘gratified’ doesn’t cover it as far as I am concerned.”

Moore is optimistic that the repairs will occur before the 100th anniversary of the memorial in 2025. “We’d like to have it before then,” he says, adding that the entire area will be redone since it’s difficult for pedestrians to access.

On Veterans Day 2019, American Legion groups held the first ceremony at the cross-shaped memorial since the Supreme Court verdict. They returned a year later to pay tribute to those enshrined on the memorial. This time, however, social-distancing measures were part of the ceremony.

Moore’s connection to the memorial dates back to when he was a boy.

His father took him to the memorial to educate the 8-year-old about the service and sacrifice of the 49 men whose memories are enshrined on the memorial.

“My father told me that this is what this country does to remember those who served in the armed forces,” said Moore, whose dad fought at Guadalcanal. “And it stuck with me forever because he revered the place. It’s a place of honor and solemnity. And it’s a point of pride for my father and myself.”

Every donation will go directly toward the memorial’s restoration. To participate in the campaign, visit www.pgparks.com/4890/Friends-of-the-Parks.