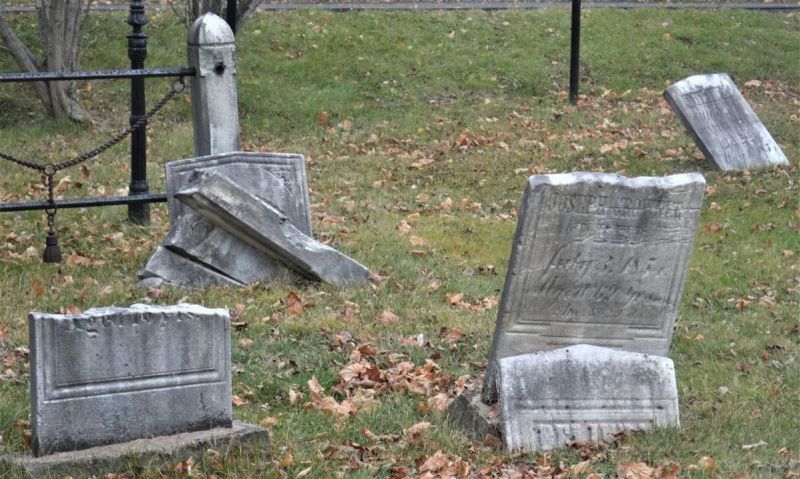 American Legion Post 702 in Wellsville, N.Y., annually places U.S. flags at local cemeteries on Memorial Day to honor the veterans buried there. And for a while, American Legion Riders Chapter 702 Director Dennis White hasn’t liked what he’s seen at two of the area’s cemeteries: headstones that have fallen over and a lack of general upkeep on the property.

So White and his fellow American Legion Riders are going to do something about, leading an effort to restore the appearances and honor the veterans and others buried at Johnson and Bellamy Hill cemeteries.

“I’ve been (placing flags) the past five or six years with my daughter, and it always bothered me to find them in such disarray and abandoned,” White said. “There are 28 veterans (buried at Johnson Cemetery): two World War II, one (War of 1812), and the rest are Civil War.”

White has gotten maps of the cemetery for the local historical society and found buried there were “our forefathers of the town and village, and they’re being neglected." Noting gravestones knocked over and snow plowed over others, White wrote a letter to the Town of Wellsville stating that Chapter 702 wanted to work on cleaning up both cemeteries.

“It has disturbed me and others that for so long this cemetery has been overlooked,” White wrote. “Many of the stones have fallen over, need to be straightened and headstones put back on the graves. It is our goal to show respect to all who are buried in the cemetery, veterans and (non-veterans) and to give them the dignity they so deserve. Our hope is that both cemeteries will again be a place of reverence and solemnity.”

The town unanimously approved the proposal by Chapter 702, which will fundraise for the project. But since word of the Riders’ plans, others in the community have stepped up to assist.

“I didn’t know when I sent the letter … I was shocked at how quick this picked up,” White said. “I’m getting phone calls from contractors saying ‘This is what we do. If you need help let us know.’ The Allegany County (Area) Foundation, I’ve gotten a call from them, plus applications for grants that are available. This has taken off way more than I thought it would.”

Chapter 702 will work to provide markers for each of the veteran’s graves, including the 10 at Bellamy Hill. “My goal is the first go in and clean them up and make them kind of presentable,” White said. “And then put the real veterans markers back in there the way they’re supposed to be. And then start straightening the stones the best we can.”

White said the project also allows the Legion Riders to get back to supporting its community, which has been limited for almost a year because of the pandemic. “Yeah, we did a couple rides, but you couldn’t do anything,” he said. “This way, you’re out in the open. And it’s a project that needs to be taken care of. It’s not going to happen overnight. But in a couple years it should be back to where it originally was.”