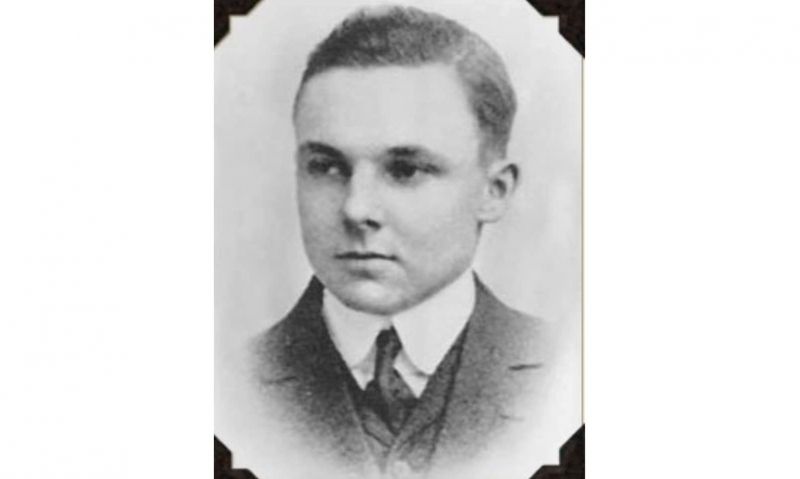 It was about four years ago that Charles A. Conklin American Legion Post 28 in Grand Haven, Mich., brought Chris Petras on board to help with promotion and marketing for the national organization’s 100th anniversary celebration in 2019. During this process, Petras joined the Sons of The American Legion Squadron 28 as an honor to his late grandfather’s service in World War II, and uncovered documents that helped tell the story of the evolution of the first 100 years of American Legion Post 28 and its namesake Charles A. Conklin – including a single document from 1921 that led to the fallen World War I hero receiving the Purple Heart.

The story of Post 28 began after the post hosted a successful dinner gala that honored The American Legion centennial. The gala raised a question – what is Post 28 doing to celebrate its 100th birthday? With a doctorate in research, Petras embarked on a journey of telling the story of Charles A. Conklin American Legion Post 28.

Petras spent hours and months in the History and Genealogy Department at the Loutit District Library in Grand Haven to research Post 28 and its namesake. He combed through 3,500 newspaper articles, hundreds of official documents and military documents available online.

“I like to emphasize to other American Legion posts is go to your local library and meet with the library staff there, particularly those in the genealogy and history department, because they are just a treasure trove for research a lot of times,” Petras said.

In his research, Petras “discovered all of these incredible facts about the post. One in particular that surprised everyone is that the chartering of Post 28 was incorrect.” With help from the American Legion Department of Michigan, Petras obtained the original charter of Post 28 which was June 12, 1919 – not Aug. 20, 1920 as members have thought all these years.

Then came “the underlying question I had throughout the research process was did Charles Conklin ever receive a Purple Heart,” Petras said. “No.”

The story of Conklin

Conklin was born in 1895 in Cook County, Ill., then his family moved to Grand Haven in 1903. He was athletic and artistic, and was the artist for the Grand Haven High School yearbook his senior year in 1914. Under his photo and name in the yearbook, Conklin wrote, “A brain and a hand to-do.”

“I’m thinking what does that mean? That’s pretty prophetic, but was does that mean?” Petras questioned. “But it all comes together when you look at his eye-hand coordination – he was outstanding at baseball, he was a great artist, and then he became a machine gunner (during World War I). So the whole time it’s this eye-hand coordination that’s the underlying theme to him and his skills.”

Conklin moved to Cincinnati in 1916 to live with his older sister, joined the Ohio National Guard, and was a draftsman for an automotive company. He was drafted into the U.S. Army in June 1917 – only a month after the Selective Service Act was enacted – and left for France by ship on Oct. 31, 1917.

Conklin arrived in Brest, France, on Nov. 13, 1917, and battled snowstorms and illness while traveling across France to reach the German frontline. But all the while, “he remained optimistic and felt that it was his duty and honor to be there and serve,” Petras said.

In a letter to his parents that arrived soon after his arrival, Conklin wrote, “We are all so much near the trenches now, which is what we all look forward to. As for myself, I would not have missed this chance for any money. Now that we are right in France, we can realize the conditions better than we could before, or than anyone who has not seen them. If any other says the war will be over very soon they disagree with me.

“Don't worry about me. I feel fine. I am pleased with the quarters and food and except for the fact that I am away from you. I am glad that I am here.”

On May 4, 1918, Conklin and his men pushed to the German frontline for an assault when he was hit and wounded by shrapnel. He was taken to an American hospital in Baccarat, France, where he succumbed to his wounds on May 7. He was the first Grand Haven resident to make the ultimate sacrifice on the battlefield during World War I.

“With historical documents we were able to put more precision on the history of Post 28’s namesake and what a hero he really was,” Petras said. Conklin was then buried at an American plot in Baccarat.

The document of proof

At the request of Conklin’s parents, their only son was disinterred on Feb. 9, 1921, and arrived home to Grand Haven for reburial on June 3, 1921. “His body takes the same route in reverse as he took going over to France,” Petras said. The family also asked Post 28 to do the honors of arranging Conklin’s memorial and burial service at his final resting place in Lake Forest Cemetery in Grand Haven.

With the notion that Conklin was eligible for the Purple Heart, Petras contacted Michigan U.S. Rep. Bill Huizenga’s office to make inquiries to the U.S. Army about the medal. However, the initial inquiry resulted in unfortunate news. Conklin’s military records were among those destroyed in the Military Personnel Records Center fire of 1973 in St. Louis. The loss of Conklin’s military documents from the fire resulted in the U.S. Army returning word that they couldn’t determine his eligibility for the Purple Heart.

But during his research online, Petras had uncovered a key document – a letter from the U.S. detailing the disinterment of Conklin. On the document it stated cause of death: DWRIA (died of wounds received in action).

Petras provided this evidence as proof. “And that was the document that led to the reconsideration of the U.S. Army saying Pvt. Charles A. Conklin is eligible for the Purple Heart,” he said. “I have just been blessed to be a part of this. Who would have thought that after 101 years you would uncover a document in particular that would lead to the eligibility of the post namesake to receive the Purple Heart. It’s just incredible.”

“As a researcher, it was a real positive feeling that the research resulted in this,” Petras added. “It is just an amazing blessing to have, after a 101 years, a part in acknowledging the namesake of Post 28 for his honorable service and the ultimate sacrifice he made for our country. And that somehow I had a part in that, it’s just amazing and a blessing … that’s how I look at it.”

The significant research done by Petra is now the foundation of a Post 28 documentary.

Petras was acquainted with filmmaker Daniel Joel Deal, who had produced a military documentary called “A Salute to Honor” that aired on the PBS Michigan station. This inspired Petras to create a documentary that chronicled the first 100 years of Post 28. Together, Petras and Deal co-produced and co-directed the “Our Family, Our Home: Charles A. Conklin American Legion Post 28 Grand Haven, MI” documentary. See the trailer here. The documentary has been broadcast on PBS stations in Michigan.

Petras also published a book on Post 28’s 100 years called, “A History of Events in the Centennial Evolution of the Charles A. Conklin American Legion Post 28, 1917-1919.”

“It seems like all positive energies seem to have guided me to Post 28,” Petras said. “To bring this type of a closure to Post 28’s first 100 years, its history, is just phenomenal.”

Save
Tags: Honor & Remembrance, Sons of the Legion