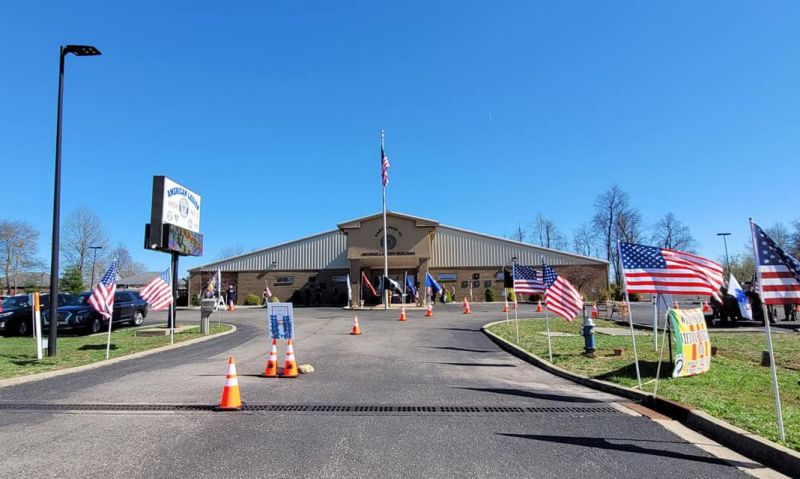 In 2018 and 2019, Hardin American Legion Post 113 in Elizabethtown, Ky., provided a dinner, gifts and a welcome home to close to 1,000 veterans and their families during the post’s Vietnam Era Veterans Honors Dinners. The coronavirus pandemic forced the cancellation of the 2020 dinner, which was difficult for both the veterans honored during it and those Legion Family members helping put on the event.

“Because all the veterans already were looking forward to it, I think it hurt them … and everything was already put out that we were going to have it,” Post 113 Adjutant Brian Knoch said of the 2020 event. “It really hurt us to not be able to do it. It was kind of a bummer that we had to shut everything down.”

With more time to plan this year for an alternative event, Post 113 wasn’t going to let Vietnam War Veterans Day come and go this year without some sort of commemoration. And that’s what the post’s Legion Family did, staging a drive-thru event March 30 at the post to honor around 100 of the area’s Vietnam veterans.

Those being honored drove around the post and were able to safely stay in their cars while being presented with gifts. Members of the community joined in to show their support, waving flags to go along with the flags stationed around Post 113’s parking lot. Signs thanking and welcoming home the veterans also were placed along the post’s property.

Veterans were able to follow a path mapped out by construction cones around the post to a display table in front of the post. There, daughters of Post 113 American Legion Family members presented them with medals and ribbons.

“(The veterans) seemed to enjoy it,” Knoch said. “I know it wasn’t the traditional sit-down meal, but I think they were … just happy they know we’re still there for them.”

Members of the community joined in the event. Knoch said that representatives from the Elizabethtown Fire Department and Police Department, the Radcliff Police Department and the Kentucky State Police all came out with their vehicles. The General George Patton Museum of Leadership in Fort Knox also provided two vintage Jeeps.

“It was really nice to get the community (involved) in it,” Knoch said. “I think maybe it means more to the veterans when they see community involvement, too. Sometimes you think that because you’re a military organization, that it’s almost expected that you’re going to do stuff for them. But when you get younger kids coming up to hand out the medals … I think it meant more (to the veterans).

The following are a few more examples of how members of the American Legion Family commemorated Vietnam War Veterans Day. Those who honored the day are urged to share their efforts at www.legiontown.org.

In Red Bluff, California Legionnaires came together with others for a service to honor Vietnam veterans in a service that included a moment of silence in honor of those who died during the war.

“Extremely proud when you see the people come out that you served during that period of time because there are so many young people today that don't even know what the Vietnam war is," American Legion Post 167 Legionnaire Preston Epperson told Action News Now. "And it makes you proud when you can see people come out and still salute the flag.”

In Iron Mountain, a recognition and welcome-home event took place at Uren-Cooper-Johnson American Legion Post 50. The Dickinson County Office of Veterans Affairs set up information booths at the post, where veterans were invited to meet with representatives from Post 50, veteran service officers, Menominee River Habitat for Humanity and the Upper Peninsula Commission for Area Progress. Commemorative Vietnam Veteran lapel pins also were made available to any veterans on active duty in the armed forces at any time from Nov. 1, 1955, to May 15, 1975, regardless of location.

Following the morning program, a wreath was placed at the Dickinson County Courthouse to honor those killed in service to the nation.

In Hasbrouck Heights, members of American Legion Post 106 took part in a ceremony at Veterans Park that honored three local soldiers killed in action during the Vietnam War. Post 106 Legionnaire Dale Sipos offered a prayer for the three soldiers, noting "for the brave men who lost their lives...and we remember the brave men and women who made it home from Vietnam with their struggles today. Thank you for your service."

In Le Roy, Botts Fiorito Post 576 Legion Family members and other Vietnam veterans observed the day with a ceremony at Veteran’s Memorial Park. In a speech, Post 576 Commander David Rumsey said, “It is a day to honor and give proper recognition to the men and women who returned home from that war and did not receive a proper welcome home. We are here today to acknowledge that the sacrifices all Vietnam veterans and their families made is duly recognized and appreciated. We pay tribute to those veterans who made the ultimate sacrifice and honor those veterans that are with us today. Thank you and welcome home.” A wreath also was placed to honor three area servicemembers killed during the war.

In New Rochelle, American Legion Post 8 joined with VFW Post 439 and Vietnam Veterans of America Chapter 49 for a ceremony of remembrance at the Vietnam War Memorial. The ceremony included remarks, the reading of the names of New Rochelle residents killed in action during the Vietnam War, the playing of taps and a 21 gun salute.

In Painesville, American Legion Post 336 conducted its fifth annual Welcome Home Breakfast for Vietnam veterans. Post 336 Historian Lewis Ballard told The News-Herald the event is conducted to pay tribute to veterans "who were not well-received or thanked" when returned from service in Vietnam.

Vietnam veterans, their spouses and children under age 12 were provided free breakfasts that included Vietnam War-themed names such as the Hanoi Hanna Special and the Mekong Delta Meal.

The event also included a brief ceremony in which Ballard read the names of nine servicemembers killed during the Vietnam War who listed Painesville as their hometown. A bell was rang by Ballard’s wife, Nancy, following the reading of each name.

In Watertown, American Legion Post 17 set up an Avenue of Flags throughout the town on March 29 to honor the day.

In Kings Mountain, American Legion Post 24 conducted a ceremony that honored the 58 servicemembers from Washington County killed in the war. A bell was rang for each name.

In Brownwood, American Legion Post 196 offered a welcome home to Vietnam veterans with an observance at the Central Texas Veterans Memorial. The ceremony honored 11 servicemembers from Brown County who were killed during the war.

“It was not a very popular war. It had a profound effect on me for a long time,” Post 196 Commander and retired Army Col. Tom Gray said during the ceremony. “No one came up and said ‘thank you for your service. Thank you for what you did.'”

But Gray, a Silver Star, Bronze Star and Purple Heart recipient, said that now he gets “such a great feeling” when a child or young adult tells him “thank you for your service” or another veteran says “welcome home.”

Working with the Follansbee Chamber of Commerce, Emrys Watkins American Legion Post 45 hosted an event to honor area veterans for their service during the Vietnam War.

Chamber President Debbie Puskarich presented Post 45 members with proclamations from Gov. Jim Justice, U.S. Rep. David McKinley, and U.S. Sens. Joe Manchin and Shelley Moore Capito, recognizing the veterans for their bravery and patriotism. Vietnam veterans in attendance also were given a chance to read the proclamations and were given a standing ovation after being recognized.