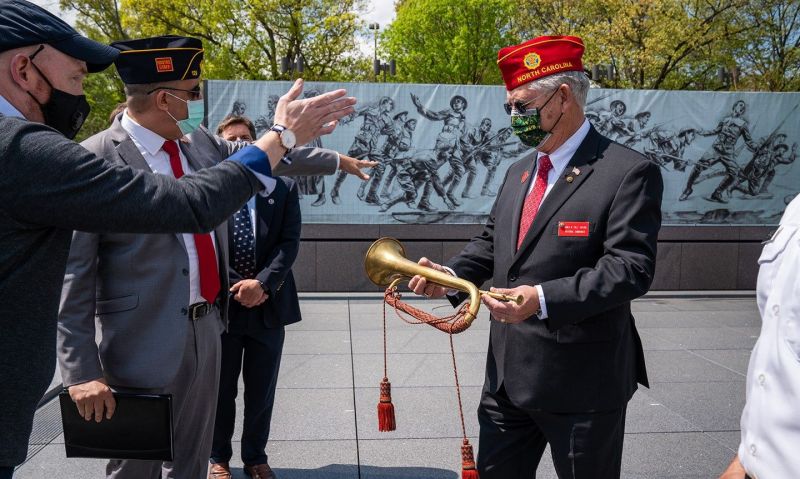 American Legion National Commander James W. “Bill” Oxford holds a bugle that belonged to Gen. John Pershing, commander of the American Expeditionary Forces, during a private tour of the National World War I Memorial in Washington, D.C., on April 15. During the memorial's flag-raising, Master Sgt. Matthew Byrne of the U.S. Army Band "Pershing's Own" played "To the Colors" on the historic instrument. Photo by Eric Kruszewski

The new National World War I Memorial opened to the public this weekend, following a live broadcast ceremony and flag-raising.

The most transformative of the four major U.S. wars of the 20th century, World War I is the last to be recognized with a national memorial in Washington, D.C. Located on Pennsylvania Avenue, a block southeast of the White House, the site honors the 4.7 million people who served: men, women, citizens, immigrants, African Americans, Native Americans, Latinos and others.

“The Great War touched nearly every American family at the time,” President Joe Biden said, in a recorded message. “For too long that nationwide service has not been fully commemorated here in the nation’s capital. This memorial finally will offer a chance for people to visit and reflect and remember.”

“They showed us, at great cost, that threats to freedom the world over must be answered,” Oxford said. “They fought through to victory, then returned home to instill in their children and communities that same love of liberty.

“These are the people who started our American Legion. These are our guys and gals. Our organization has long supported construction of this memorial, and Legionnaires should be proud of what our contributions have helped build.”

Hosted by actor Gary Sinise, the virtual “First Colors” program weaved a historical overview of U.S. involvement in the war, remarks from military and government officials, and music from Lee Greenwood, the 369th Experience and the cast of the musical “Hello Girls.”

The broadcast culminated in a flyover by two F-22 Raptors from the 94th Fighter Squadron – a unit first organized during World War I as the 94th Aero Squadron.

Members of the 3rd Infantry Regiment (the “Old Guard”) then hoisted the flag, as Master Sgt. Matthew Byrne of the U.S. Army Band “Pershing’s Own” played “To the Colors” on the personal bugle of Gen. John Pershing, commander of the American Expeditionary Forces (AEF).

The flag raised at the memorial flew over the U.S. Capitol on April 6, 2017, the 100th anniversary of the day the United States entered World War I. It went on to fly over nine American World War I cemeteries overseas, then over the Liberty Memorial in Kansas City, Mo., before returning home.

Efforts to build a World War I memorial in Washington, D.C., go back more than a decade. Early on, there was talk of giving the District of Columbia War Memorial national status, but the monument bears the names of local residents who died in the war, making that option unsuitable. The National Mall was also ruled out, as it’s considered a completed work of art.

In 2014, Congress approved the redevelopment of Pershing Park as a national World War I memorial. Following a design contest that drew 360 entries, the U.S. World War One Centennial Commission selected a concept by 25-year-old architect Joe Weisharr of Arkansas that sought to combine green space and commemorative elements.

Regulatory hurdles and input from various agencies led to substantial changes, but the completed memorial succeeds in preserving the urban park setting.

“It’s in the middle of everything, but the designers have made this a magnificently serene location,” says Dan Dayton, executive director of the World War One Centennial Commission. “The memorial provides an opportunity to get away from the crowd and contemplate those who served the cause of freedom a century ago.”

Its centerpiece – a 58-foot, 38-figure bronze sculptural wall called “The Soldier’s Journey,” by Sabin Howard – will be installed in 2024. The rest, however, is complete, including:

Like Pershing Park, the memorial is a few steps below street level, giving it the same ambiance, Dayton said. Trees have been planted and others replanted, with more room for growth. And throughout the site, red poppies bloom as a symbol of remembrance.

Weisharr calls it “a memorial of the 21st century,” with technological innovations that didn’t exist when he started the project. The Virtual Explorer app brings the memorial to users, allowing them to “place” a 3D model of it anywhere: their living room, backyard, driveway, kitchen table. And at the site itself, the Visitor Guide app “will pop up different bits of information and different pieces of augmented reality as you need or want them,” he said.

Both apps include more than 50 videos on how the war changed America, from its international standing to women’s suffrage. Users can also see and hear virtual remembrances of servicemembers, submitted by families.

“What we want to do is really start telling the stories of the men and women who served,” Weisharr said. “Throughout the memorial and additional content provided through the app and website, people will be able to access these in ways they’ve never been able to before.”

Edwin Fountain, who served as vice chairman of the World War One Centennial Commission from 2014 to 2019, said he’s often asked why America needs this particular memorial.

“We need it because the war was the most consequential event of the 20th century, and you cannot understand our country or the world we live in without understanding World War I,” he said. “The debates we have today about the roles of women and African Americans and immigrants in our society, about the role of America in the world, about the proper balance of liberty and security, are but echoes of debates we had 100 years ago.”

Thanks to the “energy and commitment of a great many talented people,” including Weisharr and Howard, the nation’s capital now has a memorial to the war that put the United States on the world stage and launched the American century, Fountain said.

“Just as the names Bunker Hill and Yorktown, Shiloh and Gettysburg, Normandy and Iwo Jima ring out in our national memory, so too should Chateau Thierry and St. Mihiel and the Meuse Argonne. Modern America’s very identity was forged during this war.”

Though the Great War crushed four empires and took the lives of 22 million people, it was not “the war to end all wars,” and set the conditions for an even more destructive conflict 20 years later, Joint Chiefs of Staff Chairman Gen. Mark Milley said.

Calling the memorial “a testament to the strength of the American people,” Milley said it is “our duty to remember what they fought for and why they fought.”

Exemplifying American courage was Tennessee blacksmith Alvin York, who wrote “Don’t want to fight” on his draft card but later received the Medal of Honor for his actions in France’s Argonne Forest, where he almost singlehandedly captured or killed an entire German battalion.

Loathe as York was to go to war, he understood the stakes, said retired Col. Gerald York, his grandson.

In 1942, York spoke to the 82nd “All American” Division as it reactivated for World War II. “He told them, ‘When we fought the war, we thought we had won the peace, but what we found was we just made a payment on our freedom, and now there’s another payment coming due.’”

Authorization to fly the U.S. flag over the National World War I Memorial came from new Secretary of the Interior Deb Haaland, who assured Americans that the National Park Service will be at the site every day, caring for it.

“As the daughter of a combat veteran, it’s not lost on me that the veterans of World War I never lived to see a memorial to their service and sacrifice here in our nation’s capital, a place where their families could share their stories and heal their grief,” she said. “Today we right that wrong. Today we remember them.”

Sandra Sinclair Pershing said her late husband, Jack, recalled childhood visits with his famous grandfather. Wherever they went, photographers followed, and people asking for autographs. Today, few know about Pershing and the troops he led.

“Some of the older people I’ve met have said, ‘Gen. Pershing? That name sounds familiar,’ or ‘Oh, there’s a Pershing Street in my town,’ but they have no idea,’ she said. “I’m so happy that we’re going to get this memorial built. These people, many of whom didn’t make it home, have had almost no recognition for what they did. This war represented all of us … I think the general would say it’s about time.”