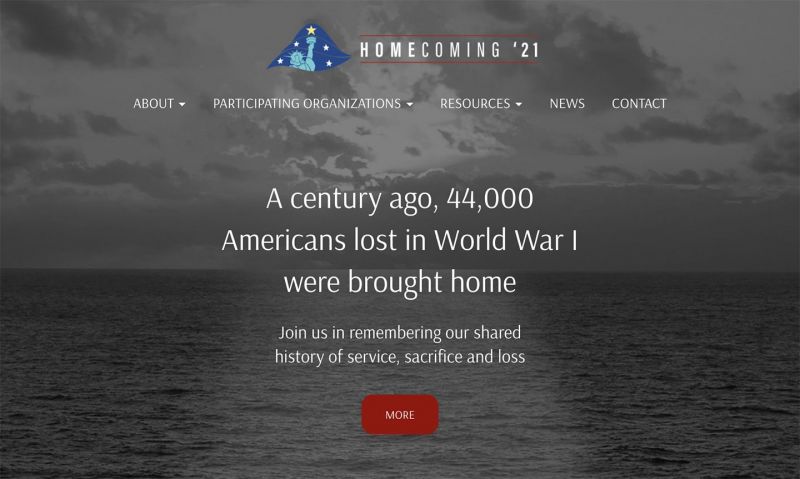 To honor the tens of thousands of American troops who made the ultimate sacrifice a century ago, a special 100th anniversary called Homecoming ‘21 is taking place in May. And American Legion posts with namesakes from World War I might have a direct connection.

One hundred years ago, more than 40,000 of the WWI fallen arrived by ship in New York Harbor and were then transferred to a burial site of the family’s choosing. Next month, The American Legion Departments of New York and New Jersey will participate in ceremonies in their respective states. Gold Star Mothers and the National Cemetery Administration are among the other groups participating.

The May 23 ceremonies will focus on the return of the Wheaton, which transported 5,169 military members home from Cherbourg, France, and Antwerp, Belgium. Those veterans represented almost every unit in the American Expeditionary Force. They included women, African-Americans, other minorities and immigrants.

“The goal of this commemoration is not only to remember the sacrifice of the World War I generation and their families, but to remind Americans of our shared history of service and loss,” says Ryan Hegg, one of the organizers of the event.

But the ceremonies are not only appropriate for the New York metro area.

American Legion staff has compared the list of the 5,169 aboard the Wheaton with American Legion post namesakes. There are more than 160 possible connections in dozens of departments.

Check this spreadsheet to see if a post in your department or a local area might be named after one of the men who returned home on the Wheaton. If your post plans to conduct a ceremony related to the return of the fallen aboard the Wheaton, please let us know via email, magazine@legion.org.

Regardless of whether there is a direct tie-in to the Wheaton, all American Legion posts are encouraged to honor local World War I heroes from the Wheaton in conjunction with the May 23 ceremony or during Memorial Day activities.

To look up the names and locations of the 5,169 fallen, there is a database and map. Visit ww1homecoming21.org.