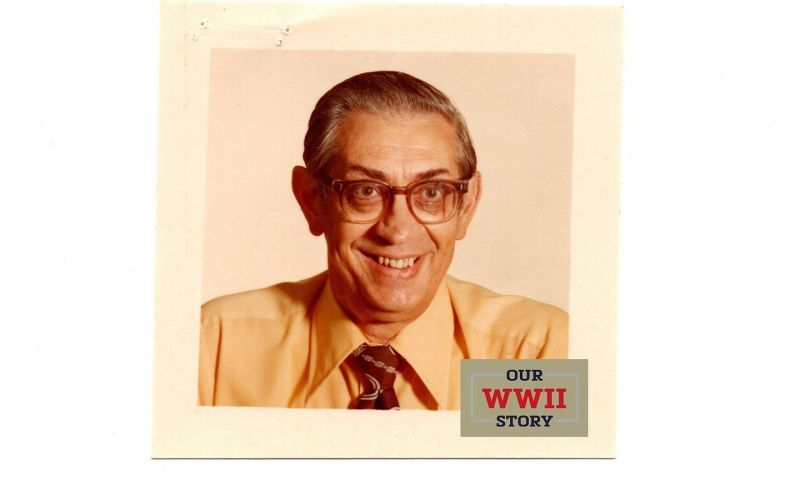 Paul F. Krasley of Frederick, Md., submitted the following piece of his father’s history to Legiontown:

This is it. The day we've both looked forward to and yet dreaded for so long. Convoy to within 5 miles of the front. Marched the rest over what was once a railroad bed – first time we heard artillery. Everything is so quiet in a steady downpour when all of a sudden artillery shrieks over us. Had our Command Post in the basement of what was once a three-story doctor's home. Glad to know that no one was hurt while I wasn't there because at 3 in the morning a shell came into the Command Post.

Jerries shelling us regular as a time clock. All landing in front or behind us.

Relieved by the 85th Div. this PM. What a relief to get back. We are now Veterans! The rest of our experiences are now History. The exact dates and towns and hills we chased Jerry off of and out of have slipped my mind.

Entered Rome June 5, 1944. I've seen my men get wounded and killed as a medical aidman. I've had their lives in my hands. I've learned many things. I've learned to have men take care of me as I never carried a weapon. The men in our outfit were some of the best the world will ever know. I've seen them unearthly tired, sick, and hungry, do things I had thought impossible of the human body or spirit.

I felt like a father to all of them, young and old alike even though I had just celebrated my nineteenth birthday under fire. They come to me as a little tot comes to his mother and say things like "Doc, I got a headache – fix me up" or "Doc, I got a blister – How about patching it up" or "I got a couple thorns from those bushes we were in last night" or "Doc, help me – the dirty devils got me with that last artillery they sent in." I, a kid, yes, a kid of 19, with these fellows, most of them older than I, and I had to take care of 34 of them and sometimes many more.

We slept where we could, when we could, and how we could. Eating under the same conditions, sometimes getting neither eat nor sleep for three days at a time. Fighting Mother Nature as well as the Jerries. Raining: I don't think I've ever seen that much rain before and when the dry season came, dry it was.

These men are the best that ever breathed God's free air and many more like them doing things and going through a Hell on earth. These men, many of them giving their all for the life of one of his buddies and for me.

These men shall soon take over the reins of our country. Oh, ye patriots of bygone days rest in peace for I assure you they shall do another good job for your and my country. Men who can sing when the chips are really down, when they don't know if the breath they've just taken will be their last.

After a few months of this kind of life, you become so close to each other that blood relation couldn't make you any closer. You then wouldn't miss the next engagement for anything because you don't want to miss being with them for a minute.

On the morning (0600) of the second of October 1944, while treating some casualties of the night's attack, I stepped on a shoe mine near Magnolia, Italy, in our drive to reach the Po Valley. My days of service to the men I marched among were now over; it was now a closed chapter. My left foot was shattered completely, a flesh wound of the right thigh, and three times in the right hand were my wounds.

I lay there two hours among my buddies waiting to be carried down the mountain slope to the aid station. It was while lying there on my face that the moment I had dreaded had at last arrived. I now had to say goodbye to the guys I had started to admire; and yes, even love, some time ago. It was with tears in my eyes and yes, I even saw tears in some of my buddies' eyes, when the litter-bearers carried me down the slope in a downpour.

So long; yes, so long, to a group of guys that are tops for my money in any language. Today six of those original 34 men are still with the outfit – the rest, like myself, or are now sleeping under the sod and the dew waiting the judgment day on the slope of some Italian mountain they lived, fought, and died to defend.

Surely God, in all his glory, has a place for such men in His Kingdom above. They had little time to enjoy life and to take the things this world gives to those that will seek for them.

After 14 months and 20 days of hospitalization, I finally closed entirely my Anny career. On December 22, 1945 at England General Hospital in Atlantic City, New Jersey, I received my C.DD, an honorable discharge.

My Army career is over, and I can't say I loved the whole 32 months and 12 days of it, but some of the things I experienced I wouldn't give up or have missed for a million dollars.

Submit your own World War II story to Legiontown (http://www.legiontown.org/share).