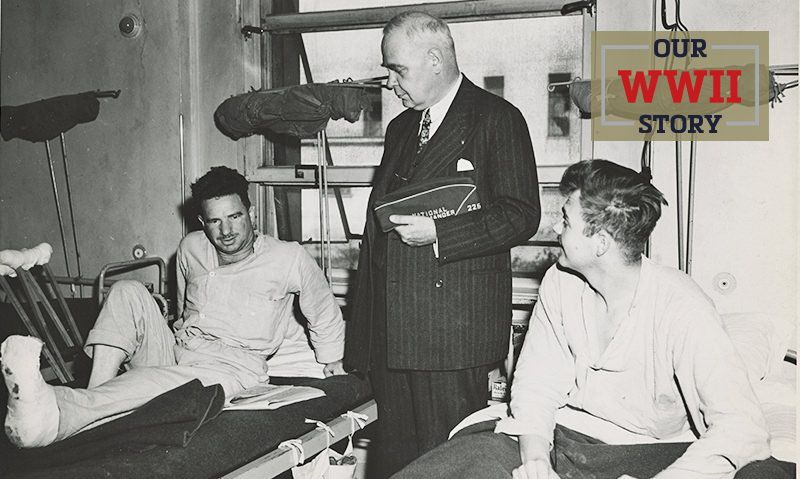 National Commander Edward N. Scheiberling with patients at a U.S. Army Hospital near Naples during his tour of the European Theater of Operations

At long last, Nazi Germany was defeated. Full victory in World War II, however, “will be ours only when we have placed the keystone in a world structure for permanent peace,” American Legion National Commander Edward N. Scheiberling wrote from San Francisco shortly after May 8, 1945 – V-E Day.

Victory in Japan was still three months away, and The American Legion continued to impress upon the nation the need to remain vigilant in this final stanza, buy war bonds and support the effort from the home front. “The mighty Nazi war machine is smashed,” Scheiberling said in an official statement following the German surrender. “Smashed is the Nazi scheme for a super-race designed to rule a slave world. But our task is only half done. We have won the European phase of World War II. We still have to win the Pacific phase. The war against the Japanese must be carried on until it, too, reaches a victorious conclusion.”

Scheiberling and American Legion Legislative Director John Thomas Taylor had recently met with Legionnaire President Harry Truman, who less than a month earlier assumed office following the death of Franklin D. Roosevelt. In the meeting at the White House, the commander told Truman, “The American Legion, representing 2 million men and women of both World Wars, will do all it can to interpret the views and feelings of America's veterans on enduring peace and world security.” He also told the president that “the nation's fighting men and veterans should have representation at the next peace table.”

By the time Japan surrendered in August 1945, the worldwide death toll from the war was estimated at upwards of 85 million.

For most in American Legion leadership – primarily veterans of World War I who had vigilantly pushed for peace through strength after losing nearly 117,000 of their comrades in Europe 25 years earlier – the reality that the world went back to war, an even deadlier one, weighed heavily.

“As I write this message from San Francisco,” Scheiberling penned, “there rings in my memory an old phrase. It is: ‘There never was a good war or a bad peace.’”

By early summer, as the Allies closed in on a battered but determined Japan, The American Legion was once again pondering a future of peace and how to keep it. “Military victories, surrenders and conferences between world powers are but steps in this building a framework for peace,” the commander wrote. “To complete the structure will require the highest degree of determination, understanding and cooperation of all people. If we fail again, we concede that wars are inevitable.”

The first American Legion National Commander, Franklin D’Olier, delivered a similar message in the final months of World War II. Serving at the time as chairman of the U.S. Strategic Bombing Survey, D’Olier lamented the fact that World War I had not effectively taught the human race a lasting lesson.

“It is obvious that upon the conclusion of the present war, some instrumentality must be created that will assure the future peace of the world,” D’Olier wrote in June 1945. “This is the hope and desire of the nations now allied in this greatest of all wars, to wipe out the ideologies that would destroy the democratic way of life that this nation has enjoyed since its founding.” In the article, he made The American Legion’s relentless case for Universal Military Training for all men 18 and older, rather than have a large standing army.

The United States had been woefully unprepared for World War I, with less than 400,000 – including National Guard – in uniform prior to U.S. entry in 1917. After the United States entered, that number would soar through conscription to more than 4 million, in a matter of months – the majority untrained to serve in a military ill-equipped to fight any foreign threat. Following World War I, The American Legion battled continuously for whatever U.S. defense and national security investments were possible at the time, continuously putting peace and diplomacy ahead of force.

The attack on Pearl Harbor changed all that. Suddenly, once again, America was thrust into a world war, better prepared than the last time, but once again under-resourced and ill-armed to go head-to-head with the seasoned German, Italian and Japanese war machines, and their allies.

D’Olier wrote that America simply could not let that happen again after World War II. “Can this nation afford to ignore the experiences of 1917 and 1941? Our will for peace and our determination to avoid war in those years availed us nothing. Equally ineffectual have been our disarmament program, embargoes and neutrality acts. What, therefore, can we do to preserve our way of life and to make reasonably certain that our nation shall remain at peace with the world? We will all agree that we do not want a standing army large enough to challenge the world. This would defeat the very purpose for which this war is being fought.”

A military-capable citizenry – one that could be summoned from every and any corner of the nation in an emergency – was the Legion’s preference. “The objective,” D’Olier wrote, “is a trained group who will stand as a bulwark against those aggressor nations who found us so woefully unprepared in 1917 and again, despite that experience, when this present war began.”

Universal Military Training would never come to fruition in the way The American Legion envisioned it. Its last gasps came in the mid-1950s when President Eisenhower supported and signed legislation that built the foundation for the modern Reserves. By then, the United States had gone back to war once again, on the Korean peninsula, and was within a few years of a full-scale fight in Southeast Asia. U.S. armed conflict would, in fact, prove continuous through the Cold War, the Gulf War and the Global War on Terrorism, defying the founders’ dreams of lasting peace.

“En route to San Francisco by plane, I saw our country anew,” Schieberling wrote in July 1945. “In a brief 24 hours, the panorama of a nation untouched by the physical scars of war was unfolded before my eyes. We have something for our veterans to come back to. We must keep it that way.”

World War I veteran U.S. Sen. Leverett Saltonstall, R-Mass., wrote in The American Legion Magazine at the time that unity was the answer to defy “rabble rousers” who sought to crush such dreams and turn people against each other, even after World War II ended. He predicted they would “set veteran against non-veteran, worker against employer, Christian against Jew, Catholic against Protestant, black against white.”

Nazi Germany’s unparalleled intolerance was, to Saltonstall, the greatest enemy of democracy and contributor to armed conflict. “The cooperation so vital to any military action, the closer understanding gained during battle among men of all nations, creeds and colors, have taught our soldiers how important unity is … They know that the world they want for themselves and for their children can be achieved only through the cooperative efforts of every group in our land.”

Saltonstall’s dreams of unity, like those who envisioned a future without war, were not to be realized in the decades ahead. “Unfortunately, it is not enough to know what we are fighting for, as we who came back from the last war have discovered,” he wrote. “We also knew what we were fighting for back in 1917. We knew why we had gone to war and what we wanted from the peace. But we did not know how to get it for ourselves and for our children. And because we failed in that, all the rest of our knowledge was useless.

“When we came home, we forgot to continue that protection in the peace, and we failed to see that democracy’s enemies were regrouping for another kill. We won the war, and we lost the peace. We have paid very dearly for those mistakes. But we have also learned from them.”

Visions of world peace, collaboration and unity aside, The American Legion would continue to take more tangible and achievable steps – still alive and well today – while holding out hope that war need not be inevitable.

Scheiberling put it this way: “Honored care for the dead; adequate rehabilitation for the disabled; readjustment into civilian life for able veterans with all opportunities we pledged; vigilant action to see that our country maintains the same role in building peace that we had in waging war; and safeguards for the protection of our country so that there will never again be another Pearl Harbor – these are my aims for The American Legion.

“To achieve them will mean that the Legion has kept faith with its founders and met the challenge of the times. We will truly be serving God and country. We must not fail.”