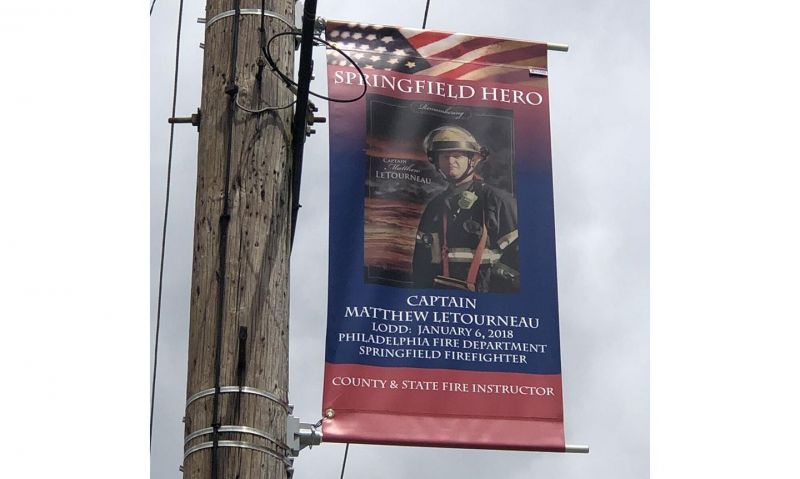 During visits to military cemeteries around the world, the rows of white crosses with names of fallen heroes humbled Bill Smeck. He only wished he could put a face to the names he was reading. This thought inspired Smeck to “start closer to home” in Springfield, Pa.

On May 8, Smeck was part of the unveiling of American Legion Post 227’s first Hometown Hero Banner of Matthew LeTourneau – a captain with the Philadelphia Fire Department and a longtime volunteer of the Springfield Fire Company who died in the line of duty. The banner features a photo of LeTourneau in uniform, his line of duty death of Jan. 6, 2018, and his service with the fire departments. And it hangs on a utility pole across the street from the Springfield fire station.

“We need to be reminded that somebody had sacrificed their lives to protect us,” said Smeck, vice commander of Post 227. “Now they have a face to a name. To reflect a little bit more.”

LeTourneau’s banner is one of 15 that American Legion Post 227 will display in the community for its Hometown Hero Banner Program to honor local fallen military veterans and first responders – police officers, firefighters, and emergency medical service personnel. The banners will be displayed from now to Veterans Day.

“The heroism that these individuals displayed … to give up their lives … it’s lost in the fog of time,” said Smeck, vice commander of Post 227. “People forget. They’re busy doing other things. One of the things that I find to be missing is that every once in a while you have to reflect on what is my community about. That individual (on the banner) was part of my community and he died so we can have the privileges that we have today.”

Smeck got the banner program underway in Springfield by getting buy-in from Post 227 officers and the Springfield Community Board of Commissioners – “They were very in much support of it,” Smeck said.

The first military hero to have a banner hung will be World War II Army Pfc. George A. Talbot, who died in combat in Germany on March 12, 1945. Smeck shared that Talbot was one of three soldiers whose bodies were left behind when the American unit had to quickly withdraw to their original positions and Talbot was reported missing in action. After the war, a Frenchman told American authorities where two soldiers were buried; one was Talbot. His remains were disinterred and reinterred to another cemetery. It took four years for the remains of Talbot to be found, verified and returned to his parents in Springfield for burial. Over that time the wrong remains were dug up twice.

Other banners displayed throughout the community will feature Korean War veterans, World War II veterans, a former ambulance worker and World War II veteran who passed away last year, and the police department has chosen to display its Officer of the Year on a banner outside its headquarters.

“Not only are there military here but people in our community who have served,” said Smeck. “Our American Legion post wanted to show support for our first responders. Because every time we have a parade, every time we have honored a veteran that has passed … the ambulance corps, the fire department and the police have all been there to support us. This was an opportunity for us, for The American Legion, to give back to them.”

Smeck contacted leadership from the fire, police and ambulance department to ask who they wanted to honor on a Hometown Hero Banner. For the recognition of Matthew LeTourneau, Smeck spoke to his mother, Janice, for her permission and to see what words she would like on the banner. It was during this discussion that Smeck obtained the uniformed photo of LeTourneau.

Over 250 people stood outside the Springfield fire station for the ceremony to honor Matthew. The banner was covered by a tarp until Smeck, Matthew’s niece Hailey LeTourneau, and life member of the Springfield Fire Company Demetrios Vlassopoulous removed it.

“I get chills even thinking about it now,” Smeck said. “It was a nice experience.

“His dying brought home to a lot of local people that we see his fire trucks going out every day, firefighters risking their life … policeman and ambulance personnel risking their life. You can look up and see that banner of Matthew and realize that what they do here is very serious. That’s what I was hoping to achieve for all of this. Just to take a few minutes and reflect.”