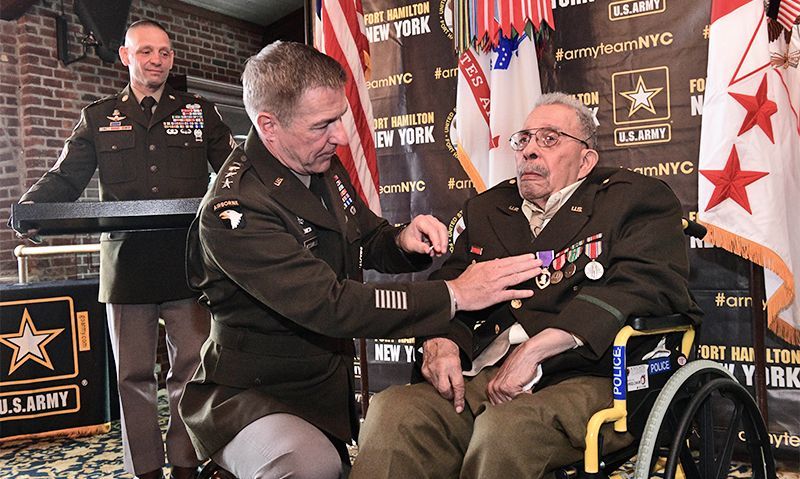 Army Chief of Staff Gen. James C. McConville (left) presents a long-overdue Purple Heart to Osceola “Ozzie” Fletcher, a Black D-Day combat veteran who was wounded in Normandy but had to wait more than 77 years for his medal. Fletcher is a member of The American Legion and appears in the recently released documentary, “Sixth of June.” (Photo by Todd Maisel)

Osceola “Ozzie” Fletcher spent much of his childhood in foster care after his father died in 1925 from the effects of mustard-gas exposure in World War I. A portion of that childhood was spent in a home near Brooklyn’s historic Fort Hamilton, established in 1825 at a location of strategic New York City protection since the American Revolution.

Friday, on the eve of Juneteenth, history continued to unfold on the post when Fletcher, now a 99-year-old Black former World War II private, longtime police officer and high school teacher was in uniform, among a throng of dignitaries, to receive a long-overlooked Purple Heart for wounds he received in a German missile attack on D-Day, June 6, 1944.

“Soldiers tragically died that day, but Ozzie was thrown to safety and survived,” Gen. McConville told the crowd. “He suffered multiple wounds that day, including a head gash that still serves as a reminder.”

The journey to obtain Fletcher’s Purple Heart “has been long and twisted,” his daughter Jacqueline Streets told the media following the June 18 presentation. “Most people said it was impossible, which honestly makes it all that much sweeter.”

It was not easy. For years, Streets and other family members had been searching for ways to verify that Fletcher, who served in the 254th Port Battalion, was wounded while transporting supplies into Normandy during the pivotal invasion that breeched Nazi Germany's hold on continental Europe. His five children all knew the story, as told in the scar on their father’s head. Medical records from his wounds were, frustratingly to the family, lost in the 1973 fire at the National Personnel Records Center in St. Louis, Streets explained.

The family continued to push for his recognition. A petition effort was launched. Veterans advocates in New York City tried to help. Then, in 2019, New York Daily News reporter Carla Roman did her first big story for the newspaper, on Fletcher and his experiences as a Black soldier in the segregated Army during World War II. “Ozzie is forever going to be a teacher,” said Roman, 26, who attended the Purple Heart ceremony. “He gave me a history lesson that day, one that I carry with me.”

The newspaper story caught the interest of Rylan Soref and Henry Roosevelt, who were wrapping up a documentary short film on the Normandy invasion, titled “Sixth of June,” which was released this month. They discovered that Fletcher is a longtime member of William E. Sheridan American Legion Police Post 1059 in Brooklyn. They reached out, interviewed him on camera and were specifically struck by “the reverence he has for the French people and how they simply treated him differently,” Roosevelt explained. “They didn’t treat him as a Black soldier. They treated him as an American soldier. In the current times, I can’t think of a stronger message.”

During D-Day 75th anniversary commemorations in 2019, the filmmakers showed an early cut of Sixth of June to Gen. Mark Milley – now chairman of the Joint Chiefs of Staff – and later brought up the issue of Fletcher’s Purple Heart.  “After hearing of Jacqueline’s tireless efforts to get her father the proper recognition, it became our mission, too,” Roosevelt said. “I knew we had to do something about it. For it to turn into this, it’s pretty awesome … pretty incredible. And all we did was make a few phone calls.”

“That’s when our luck changed,” Streets explained. “It took the film crew to help us out, to step over that wall, and go to the top. Gen. Mark Milley looked at it and said, ‘You’re right. This isn’t right.’ He set his staff on it.”

“The Pentagon went in and was able to piece together his story,” Roosevelt said.

A two-month investigation into Battle of Normandy wounds received by Fletcher and 101-year-old former 494th Port Battalion Chief Warrant Officer Johnnie Jones of Louisiana concluded that both Black veterans had been wounded by enemy attack; Jones had been hit in the neck with shrapnel coming ashore on D-Day. In April, the Pentagon announced that each would be presented with a Purple Heart.

“Ozzie’s story isn’t that it’s just unique,” Roosevelt said. “It’s under-told. He served his country at a time when his country didn’t necessarily serve him well. Ozzie’s story is an integral part of our collective history. We can’t lose sight of that. We can’t allow these stories to fade or these individuals to remain in the shadows.”

Gen. McConville told the crowd at Fort Hamilton that he had just returned from Europe where U.S.-allied military leaders and others there still express gratitude for sacrifices made by Americans during World War II. “Where the American soldier went – where Ozzie and his fellow soldiers went – freedom followed, and freedom remains today. Many, many over there appreciate the heroism and the efforts of great soldiers like Ozzie. This is the greatest generation. This is the generation that grew up during the Depression. And when our country was attacked, they raised their right hand and said, ‘Send me.’”

Fletcher and Jones were among some 2,000 Black troops who participated in the Normandy campaign. In the 2019 Daily News article, Fletcher reflected on their role in the segregated Army, saying, “The success of D-Day caused Black people, specifically American Blacks, to contest the segregation we had to endure. A lot of Blacks came back to America with a spirit to fight their own fight.”

Fletcher applied that spirit to his community in multiple ways. He spent 26 years in the New York Police Department, taught high school for 14 years and was a community relations specialist in the Crime Prevention Division of the Brooklyn District Attorney’s Office. “It seems that every time I am out with him, there is someone coming up, happy to see him, their former teacher, and eager to say how positive an effect Mr. Fletcher had on their lives,” Streets said.

“Ozzie may have left the Army, but he never left the life of service,” Gen. McConville told the crowd. “He has spent his entire life giving to those around him, whether they were brothers in arms, families or the community. Today is Ozzie’s turn to receive.”

“I’m exhilarated by the whole thing,” Fletcher said after the presentation. “I feel happy. It shows that some of the records … did get through. I am jubilant.”

His words at the ceremony largely centered on his appreciation for the French, their part in the war effort and the way they treated him and other Black Americans during the liberation from Nazi occupation. He reflected on the D-Day operation as “a scramble. This was for all the marbles. It was crazy.”

Post 1059 member Albert Pico, a Korean War veteran and former police officer, said he has known Fletcher for years, but like so many of that generation, they didn’t talk much about war. “He’s a great guy, and he’s been a member of our post for 70 years,” said Pico, himself a 68-year member of The American Legion. “God bless him. It was wonderful to be here. I wouldn’t have missed this for the world.”

At an Army fort filled with history, many in attendance saw the Purple Heart ceremony as an important step in the nation’s journey. “I think we are finally acknowledging things that happened in the past and trying to correct them, going forward,” Streets said. “I mean, there are oversights also … and mistakes also. But this mistake has happened to a whole lot of Black veterans.”

“I think Ozzie’s story serves as a motif for the changing times that we are hoping to see in this country, seeing the wrongs righted that have stuck through history,” Roman said. “They are finally changing now. A lot of things that people maybe thought had been cemented, and weren’t possible to change, are changing. Ozzie’s story is a perfect example of that.”

Brig. Gen. Tom Tickner, commander and senior officer on the historic post, said “it was an honor when I heard that Ozzie wanted to do the ceremony here at Fort Hamilton because he was from Brooklyn and actually lived here as a little kid. He wanted to do it here – in the shadows of his home.”

As for the historic nature of Friday’s presentation, Tickner said “the country is moving forward. It’s moved a lot in the last two years. We’ll see what it looks like 50 years from now. I guarantee it will be different.”

The American Legion has made a top legislative priority to urge Congress to lift statutes of limitations or any other obstacles that may impede proper investigation – and to expand reviews of previously overlooked actions – into the service records of minority military personnel from all war eras that deserve reconsideration of medals, citations or other recognitions. That priority is supported by Resolution 17, passed by the Fall 2020 American Legion National Executive Committee.

I guess I have to wonder why

I guess I have to wonder why Mr. Fletcher's article says "black". I spent 25 years in the Army and we made a concerted effort to think "green". The fact that Mr. Fletcher had to wait so long for his Purple Heart should have had nothing to do with the fact of his race. Did it? If not then he should be identified as what he is: Soldier, United States Army. The French apparently got it. “the reverence he has for the French people and how they simply treated him differently,” Roosevelt explained. “They didn’t treat him as a Black soldier. They treated him as an American soldier. In the current times, I can’t think of a stronger message.” It is long past time to do what MLK said - character content rather than skin color. In any event, kudos to those who got this job done and kudos to Mr. Fletcher, soldier, United States Army.
Submitted by helbergja : Jun 24, 2021 5:52pm

Outstanding, I hope they can

Outstanding, I hope they can find all WWII & Korean War vets who are deserving of medals before they pass on.
Submitted by buck : Jun 25, 2021 8:59am