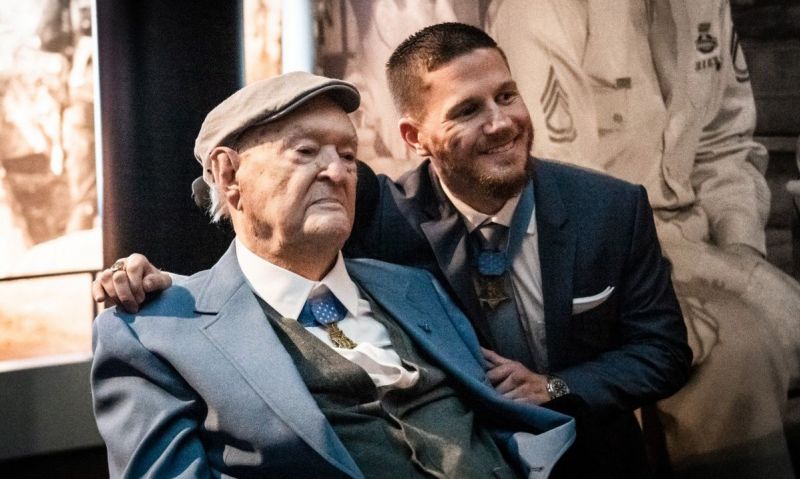 Charles Coolidge, the oldest living recipient of the Medal of Honor, is joined by retired Marine Corps Cpl. Kyle Carpenter, the youngest living Medal of Honor recipient, at the dedication of the Charles H. Coolidge National of Medal of Honor Heritage Center in Chattanooga, Tenn., on Feb. 22, 2020. Photo by Bradford Coolidge

Long before they learned of his bravery in combat, Charles Coolidge’s sons recognized there was something special about their dad.

Everyone in Chattanooga knew him, and people always called to consult or confide in him. “It was because of who he was as a person,” says Charles Coolidge Jr., a retired Air Force lieutenant general. “As I say, he was a man of honor before he had the Medal of Honor.”

Coolidge died April 6, four months shy of his 100th birthday. He was the nation’s oldest living Medal of Honor recipient and a 77-year member of The American Legion.

Born in Signal Mountain, Tenn., Coolidge grew up in the scarcity of the Great Depression, shouldering responsibilities from an early age. As a child, he overcame a severe speech impediment with a determination characteristic of the greatest generation. Later, at Chattanooga High School, he excelled in tennis and became a track star -- having an accuracy in throwing that would pay off in the war, Coolidge Jr. says. After graduation, he went to work as a book binder at his father’s printing business.

In 1942, Coolidge was drafted into the Army and sent to the European front. He fought in North Africa, Italy, France and Germany. In September 1943, Coolidge and the 36th Infantry Division made the invasion of Italy at Salerno, the first U.S. troops on the European continent. In May 1944, they landed at Anzio and helped open the gates of Rome for the 5th Army. For his actions at Velletri, Coolidge was awarded the Silver Star. Three months later, the 36th traveled to southern France to begin its march to the Siegfried Line.

In October 1944, near the French town of Belmont-sur-Buttant, Coolidge led an inexperienced and isolated group of soldiers against what was estimated to be a German infantry company. Outnumbered 4 to 1, the tech sergeant and his men repelled attacks for three days, until an enemy tank rolled within 30 yards of their position. From the turret, a soldier called in English, “Want to give up?”

Looking him in the face, Coolidge replied, “I’m sorry, Mac, you’ve gotta come and get me.”

He dodged five shots from the tank and began tossing grenades after his bazooka failed, killing some 20 Germans before coordinating a withdrawal. Not one American life was lost. In June 1945, Coolidge received the nation’s highest award for valor at a bombed-out airfield near Dornstadt. He was 23.

Coolidge returned to Tennessee and married Frances Seepe, and they had three sons: Charles Jr., William and John. When asked, though, Frances often said she had four boys.

“Water balloon fights, snowball fights – he was right there in the middle, teaching us how to sled, fly kites, swim, all that stuff,” Coolidge Jr. says. “He was really fun to be with.”

Too sick to go to church meant too sick to have fun the rest of the week. Dawdling while mowing the grass got a “Son, you’re burning daylight.” As a father, Coolidge made his expectations clear.

He also set an example in how to handle adversity. A diagnosis of multiple sclerosis affected the last half of Coolidge’s life, but didn’t slow him down.

“He taught us the foundation for every success and failure in your life is your attitude,” Coolidge Jr. says. “No matter what hurdle was put in his way, whether it was a tank or a crippling disease, he faced it with a positive attitude.”

Only as a cadet at the Air Force Academy did Coolidge Jr. realize the full picture of his father’s heroism. And in 1986, while in Europe for the arms-control talks between the United States and the Soviet Union, Coolidge Jr. and his wife traveled with his parents to many of the places Coolidge fought – from Monte Cassino and Anzio in southern Italy to the beaches of southern France, to the site of his Medal of Honor action in the Vosges Mountains, and finally, into Germany.

“It’s fascinating,” he says. “When we retraced where he’d been, I learned a lot I hadn’t known.”

After the war, Coolidge worked for VA for a short time, then returned to run Chattanooga Printing & Engraving until his retirement at 95. He was a Sunday school teacher, church deacon and elder, business owner and community leader. People frequently sought his counsel, and both political parties wanted him to run for office, from city council to mayor all the way up to Congress.

“He just never saw himself in that role,” Coolidge Jr. says.

Coolidge was also an active member of American Legion Post 14, along with Medal of Honor recipient Desmond Doss.

He regularly attended American Legion meetings, and when Post 14 had financial troubles, members asked Coolidge to take over as commander. Drawing on his business experience, he reorganized the post’s operations. Later, when a fire destroyed the post home, he saw the tragedy as an opportunity to rebuild and grow Post 14’s membership.

Coolidge served at the organization’s state level, too. “I always bragged I was the only department commander in the United States who had a Medal of Honor recipient as his sergeant at arms,” Levi says.

“He was one of the biggest patriots you’d ever meet. He loved this country.”

The National Medal of Honor Heritage Center in Chattanooga is named for Coolidge, as well as part of U.S. Highway 27 and a city park.

Hershel “Woody” Williams, 97, is now the last living World War II Medal of Honor recipient, of 473 from that war. A Marine Corps veteran who fought at Iwo Jima, Williams is a life member of American Legion Post 177 in Barboursville, W.Va.