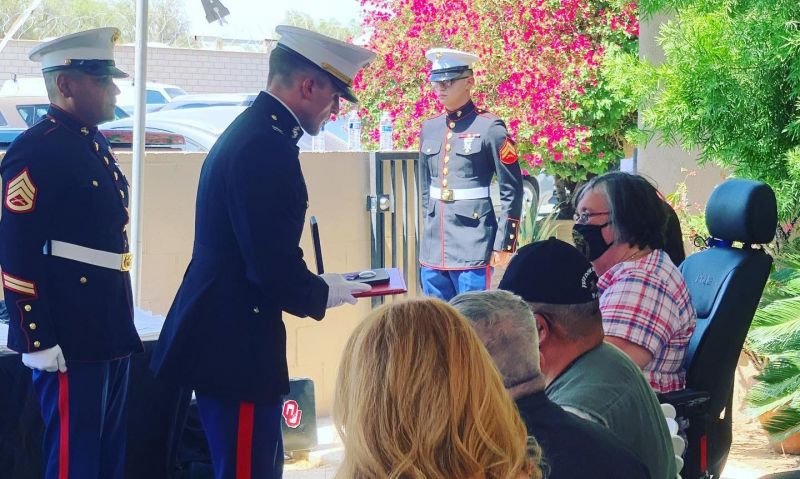 Despite what seemed to be some pretty solid evidence presented immediately after World War II and then later, Marine Cpl. Rudolph Culjak never received his Purple Heart for injuries sustained in 1944 when he was shot by enemy forces during the Battle of Peleliu.

But thanks in part to the effort of California Legionnaire Michael Buchner, Culjak’s daughter Suzann Clark recently was presented with the long overdue medal.

It was Buchner, the commander of American Legion Post 289 in Riverside, who reached out to U.S. Rep. Ken Calvert’s office after Clark had told him her troubles with trying to get her father’s medal for years. That trouble came despite the fact Clark had seen the word “wounded” on her father’s discharge form years after his death. A local newspaper also had Culjak’s name on an injured list of veterans who returned to the area after the war.

Before retiring, Buchner was a contractor and through business had gotten to know Clark and her husband, who served in the Marines.

“We took a liking to each other,” Buchner said. “They were both confined to wheelchairs … so I would check on them every now and them. And when I became (post) commander, she’d expressed to me ‘I’ve been trying to get a Purple Heart for my dad from World War II. Do you think you can pull some strings?’

During a breakfast Buchner reached out to staff from Calvert’s office, letting them know that Clark had been trying to get the Purple Heart for 40 years “but just keeps hitting brick walls. She wasn’t giving up,” Buchner said. “I asked if there was anything they could do to help. And that’s what got the ball rolling.”

That began a two-year process of submitting all the necessary documentation, which included excerpts from a book written by Culjak’s captain at the time of being wounded that mention him by name while referencing the injury and how it happened.

“There was plenty of documentation. It was just crazy,” Buchner said. “When the Marine Corps got involved is when things started to move along. And this was when it was far beyond me. I was just a catalyst to help make this happen.”

Culjak’s Purple Heart was presented to Clark during a ceremony on July 3 at Post 289 that included American Legion Family members from various posts, a Marine Corps detail, Corona Mayor Jacque Casillas and other dignitaries. Buchner was part of the ceremony but said it was a struggle. “Before we went up on stage … I took one look (Clark), and that was the last look I took of her before I was going to speak,” he said. “I turned to her, and she just smiled, and a tear came out of her eye. And I knew that what I was doing was a great thing. To see her and the smile on her face, and knowing all the years that she’s tried (to get the Purple Heart) … was an incredible joy.

“This woman is so incredibly sweet. She lives about a half hour away from me without traffic. If she were to call me at 3 in the morning and say ‘Mike, I really need a gallon of milk,’ I’d get my butt up and take her that gallon of milk. So it was quite a joy to be able to do this for such a nice person.”