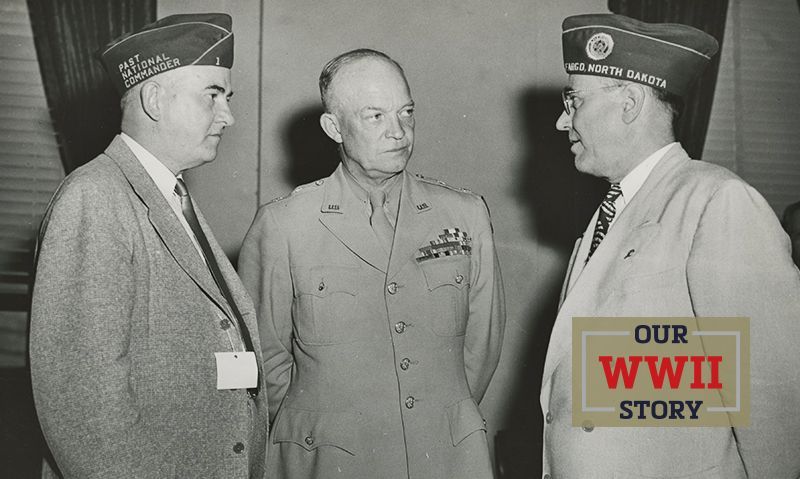 Past National Commanders Harry F. Colmery of Topeka, Kan., (left), and Lynn Stambaugh, a native of Abilene (right), extend the greetings of the national organization to General Dwight D. Eisenhower at his homecoming in Kansas. Published in the National Legionnaire, July 1945.

“Every boy dreams of the day when he comes back home after making good. I, too, so dreamed, but my dream of 45 or more years has been exceeded beyond the wildest stretch of imagination.”
- Gen. Dwight Eisenhower, Supreme Allied Commander Europe during World War II, at his June 22, 1945, homecoming in Abilene, Kan.

More than 50,000 spectators lined the streets, gazed through windows and gathered in the park to welcome home to Abilene, Kan., one of history’s most beloved military figures: Gen. Dwight D. Eisenhower, who led the Allies to victory in the European theater of World War II.

The June 22, 1945, homecoming for the life member of James R. Cutter Post 39 in Abilene was organized largely by Legionnaires, including Past National Commander Lynn Stambaugh, an Abilene native. More than 200 national news reporters swarmed into the town of about 5,000 to cover the 2 ½ hour parade that ended in a gathering at Eisenhower Park.

The parade included more than 100 floats. Marching bands and drum corps performed. Citizens cheered, displayed flags and bunting, and celebrated Abilene’s place in history, from the Chisolm Trail to food-production services during World War II to hometown of the general who led America to victory in Europe. They waved signs that read, “Welcome home, Ike!”

Post 39’s float celebrated its Boys State and American Legion Baseball programs. The American Legion Auxiliary unit’s entry was covered in more than 12,000 red poppies, and the Sons of the American Legion squadron’s bugle drum and bugle corps marched to honor the general who less than two months earlier was leading the Allies to victory over Nazi Germany.

One of the floats carried Eisenhower’s 1909 high school football teammates, 10 of whom wore their old football sweaters. Eisenhower was a tackle on the team before he went on to West Point and played halfback for Army.

Eisenhower’s world-changing military leadership had put him in the front of parades in such places as Paris, New York and Washington, D.C., but Abilene was home – and it stood apart in the general’s mind. “I have wandered far, but never have I forgotten Abilene,” he said at the homecoming event. “Here are some of my oldest and dearest friends. Here are the lifelong friends of my mother and my late father – the really great members of the Eisenhower family. They raised here six sons and equipped them to gain respect in their chosen professions. I can say all have done so.”

American Legion Past National Commander Harry W. Colmery – architect of the GI Bill – joined Stambaugh in the small Kansas town to celebrate the homecoming of their fellow World War I veteran. Department of Kansas leadership also joined Post 39 in planning the event, attended by Gov. Andrew C. Schoeppel and former Gov. Alf Landon, along with military leaders and local dignitaries.

Eisenhower used the gathering to advance a message that would later frame his foreign policy as 34th president of the United States, that America is “not isolationist … Intelligent people cannot be isolationists. We are part of the world, and the world is part of us.”

In November 1945, Eisenhower was presented the American Legion’s Distinguished Service Medal, its most prestigious award, during the national convention in Chicago.

American Legion National Commander Edward N. Scheiberling reflected in the ceremony about  Ike’s leadership of “in the world’s greatest combat effort for freedom’s most memorable victory.”

Scheiberling spoke of the inspiration Eisenhower evoked not only among troops under his command but among all who supported the war effort at home. “Yours became a household name in every American home, symbolic of the future certainty of final victory,” Scheiberling said. “From many millions of firesides, prayers went up to heaven, day and night, asking divine guidance for you in your great mission. You have accomplished that mission.”

Eisenhower told the crowd what it meant to receive the medal “… from Americans. If my 3 ½ years commanding on foreign soil has done any one single thing for me and for the 3 million that I was honored to command, it is to intensify the undying love that I am able to give for this country … it was my high honor to lead the greatest body of Americans ever placed under one command.”