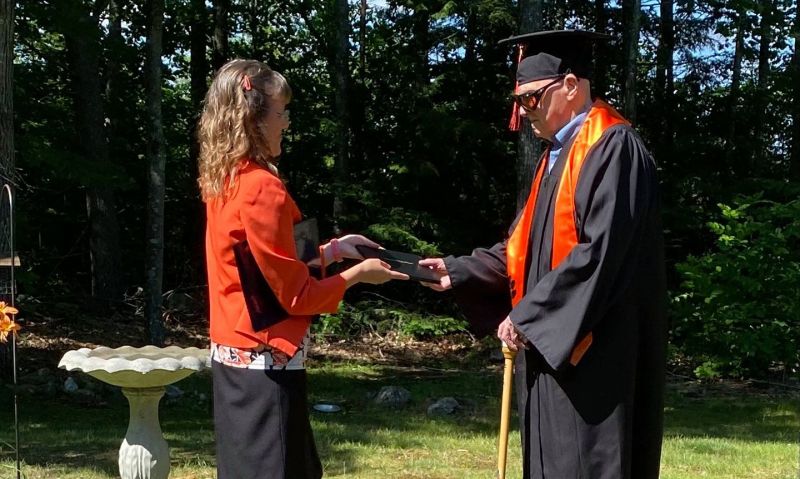 While others chose to graduate high school as the Korean War loomed, Bill Henshaw chose to join the U.S. Army in the fall of 1949. Doing so allowed him to serve his country, earning a Purple Heart and other medals in the process.

But it also meant he didn’t graduate from Taunton High School in Massachusetts, something that bothered Henshaw for years as he went on to get a job and raise six children after he left the Army. But thanks to a Massachusetts state law that awards full high school diplomas to veterans who left school early for military service – as well as some assistance from son-in-law and Maine Legionnaire Amedeo Lauria – Henshaw now has that diploma.

Lauria is married to Henshaw’s daughter Susan, who he met while they both served in the U.S. Army, and both are members of the Harry James Conway American Legion Post 135 in Sabattus, Maine. Lauria has long known of the situation with Henshaw’s diploma.

“We’ve been married 46 years, and it always comes up the fact that Bill left school, he went to Korea, and he never had the opportunity to get his diploma,” said Lauria, a former department service officer and a Auxiliary Unit 135 member. “At one time he had actually fulfilled the requirements of high school … but they did not give him his diploma. It came up again, and I had just done some work for (U.S. Sen. Susan) Collins … and I said, ‘Is there any way that he can get that. Can you check into it?’ And a week later it was done.”

Henshaw, who also is a member of Post 135 and is 100 percent service connected, was able to get a sash, cap and tassel from his former high school, as well as use the graduation gown of his grandson. Amedeo and Susan hosted a graduation ceremony in their yard for Henshaw, who was presented his diploma, with a graduation date of 1950. He also received some service medals he’d never received, including the Purple Heart.

Amedeo praised Karen Staples, a Constituent Services Representative for Collins, who he said “bird-dogged the whole thing through” and was on hand to present Henshaw with his diploma in front of family and friends.

“He’s a very proud guy, and he kind of doesn’t jump for joy,” Amedeo said. “You could see flashes in his eyes, and when he engaged with people … it was something when you reach his age … you tend to approach things with, I don’t want to say a certain reservation, but like ‘this can’t be true.’ For him, he kept revisiting it – ‘I never got my diploma’ – and it was nice to have closure on that.”

In a statement, Collins said, "It was particularly special that my office was not only able to help Mr. Henshaw receive the Purple Heart and other medals he earned, but his long-overdue high school diploma as well. Congratulations, Bill, and thank you for your service!”

A friend of Amedeo’s built a shadow box that was used to mount Henshaw’s medals and display them at his residence. “It’s nice to see all of this come full circle and see him recognized,” said Amedeo.

To watch a video of Henshaw receiving his diploma, click here.