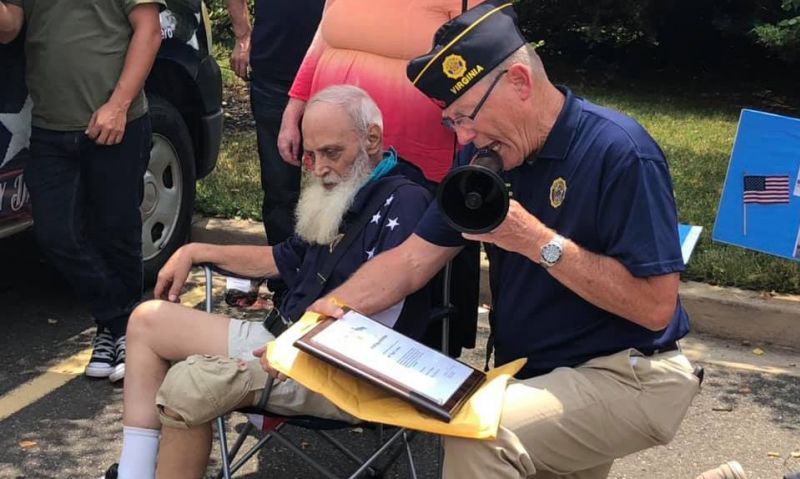 Comradeship. Honor. Respect. These three words instantly came to my mind as I observed the outpouring of support from approximately 300 participants in the “Ziggy Rocks” Ride By held on July 25, 2021, in the Department of Virginia.

The event paid tribute to a fellow comrade who has been battling cancer and was recently placed in hospice care, Carroll Levison. Known to all as Ziggy, he created something that re-defined what a true tribute would become known for, with his Veteran Recognition and Veteran Suicide Awareness truck (Tribute Truck).

“This event was an awesome tribute to an awesome man,” remarked Randy Gunn, Virginia Legacy Run founder and the Eastern Region director. “We put this together in five days and brought together all areas of the American Legion Family, along with additional friends, family and supporters. This event proves that when we get back to the basics, we can do anything.”

About 100 motorcycles, 51 cars, 30 bike passengers, 60 car passengers and 40 American Legion volunteers, law enforcement officials, sign makers, breakfast workers, parking lot flaggers, others participated in this event. That made it one of the first big get-togethers within the Department of Virginia’s American Legion Family in 2021. Many in attendance were seeing each other for the first time since the pandemic took hold more than 16 months ago.

“It was a great turnout today,” said Department of Virginia Commander Frank Hillyard. “Our comrade has not only been a very important part of The American Legion Riders, but also, an important part of our department. Ziggy’s hard work, dedication and commitment exemplifies what our organization is all about.”

Ziggy, a member of American Legion Post 247 in Remington, Va., is a disabled Air Force veteran. He retired from Special Operations at Hurlburt Field in Florida and eventually found his way to Virginia. While he has suffered from his own PTSD issues (non-combat related), it was the experiences with his son and a friend that really started Ziggy on the path to creating the Tribute Truck.

His first experience with veteran suicide was when a friend had been reported as missing. His friend had not exhibited any outward signs of struggling with suicidal thoughts but had been experiencing serious medical issues and was on a plethora of medications prescribed by the Department of Veterans Affairs (VA) to help with depression. Unfortunately, his friend was found several states away where he had driven his vehicle until it ran out of gas and then walked into the woods with a shotgun and ended his pain.

Later, Ziggy’s son was in Iraq when his MRAP was struck by an IED which seriously damaged the vehicle. The blast caused TBI and PTSD issues for his son, which led to his own mental health struggles and a dark slide into suicide attempts.

Around the same time his son was struggling, Ziggy began working with Terry Sharpe from North Carolina, better known as “The Walking Marine.”  Ziggy met Sharpe on his first walk from Stokesdale, N.C. to Washington, D.C., a 300-mile walk. Sharpe and his team focus on the larger issue of veteran suicide and PTSD awareness with several walks to the White House.  On one of those walks, Sharpe connected with Ziggy’s son and provided him a model to help him overcome PTSD and turn his life around.

One of the major themes related to suicide awareness is also a general lack of veteran recognition and appreciation for their sacrifices. While there has been little change, it has been limited to just a few events each year. Ziggy wanted to do more to recognize our veterans every day and educate others on the veteran suicide rate. So, he came up with the concept of the Tribute Truck that would serve as a reminder to others of these issues.

The Tribute Truck has been used as a parade vehicle around northern Virginia for several years. In addition, it has been used as a static display for events such as air shows, military museum open houses, National Cemetery ceremonies, recruiting events, and of course providing support for the Walking Marine while he traversed Highway 29. It has also been the lead vehicle for several American Legion Riders events providing visibility and recognition that motorcycles alone cannot provide. The truck has been a labor of love and was fully funded by Ziggy without donations from others.

Upon completion of the Ride By, all participants met at the Walmart parking lot in Warrenton for a special presentation by the immediate Past Department Commander Bill Feasenmyer. Ziggy’s son and daughter, James Levison and Ann Levison-Pineda, were there as well and very appreciative of the love and support.

"Ziggy not only dedicated his own time and money in his endeavor to ultimately change the suicide toll to zero, but he also inspired others to have the same level of involvement and compassion for his mission that he has, “said Feasenmyer. “What better tribute can we give a man that has given so much of himself than to give of ourselves just a fraction? I have never met a man who was so genuinely concerned for all veterans and this event today confirms and ratifies his legacy."

In the end, another word comes to mind regarding this event: Friendship. I, for one, am thankful for the friendship, as others shared with Ziggy. Thankful for our multiple discussions, advice and even a few “agree to disagree moments.” The longer you are involved in The American Legion, the more you will experience loss but, celebrating a life well-lived like Ziggy’s makes it a bit easier.

David Wallace is a member of American Legion Post 180 in Vienna, Va., and the Department of Virginia’s Media and Communications chairman.

To learn more about “Terry the Walking Marine” please go to:  https://www.walkingmarine.com/

Ask for help: Do not be afraid to let your friends know what you need when they ask; they want to help. You can also reach out to confidential 24/7 services like the Veteran Crisis Line: https://www.veteranscrisisline.net/