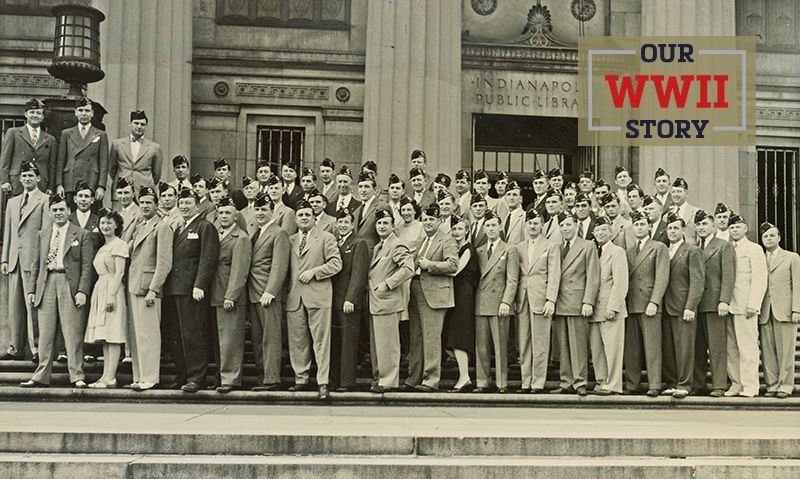 The first graduating class of American Legion College gathers for a photo on the steps of the Indianapolis Public Library, adjacent to American Legion National Headquarters, Aug. 5, 1946. The class is designed specifically for the new generation of World War II veterans who had suddenly become the majority of membership. (American Legion Archives)

The American Legion’s World War I generation was suddenly outnumbered. By the summer of 1946, membership had soared to over 3.3 million, and the number of local posts passed 15,000.

The big influx, understandably, was the return to civilian life for millions of World War II veterans who became eligible to join in 1942. Also during the World War II era, membership was extended to currently serving personnel, as is the case today, and many of the second-generation Legionnaires were on active duty at the time they joined. Programs, services and culture needed to change, the World War I veterans realized, if The American Legion was going to serve a new and younger cohort.

Creation of a national American Legion College was authorized by the 1944 national convention.

On July 8, 1946, the first class assembled in Indianapolis for two weeks of training to understand the organization. Sixty-seven World War II veterans registered and attended.

The curriculum included 95 hours of classwork, 10 hours of sports and recreation and 10 hours of examinations.

Among the classes, taught by national American Legion staff directors, were:

-       Subversive groups and their propaganda

At the end of the session, students voted to ask the National Executive Committee to pass a resolution to continue the program “in order that more Legionnaires may be imbued with the spirit of The American Legion.”

Commencement exercises were conducted in the Indiana War Memorial building, where students heard from Past National Commander Lynn V. Stambaugh. “The Legion is yours,” Stambaugh told the graduates. "The future greatness of The American Legion will know no bounds if the million and a quarter World War I veterans and the 2 million World War II veterans now numbered in the organization work shoulder to shoulder as members of the team to preserve in peace those blessings of our American way of life, which we fought to maintain against our enemies in two great wars."

The students represented 33 American Legion departments, 40 colleges and universities and traveled a total of 32,942 miles to be a part of the program.