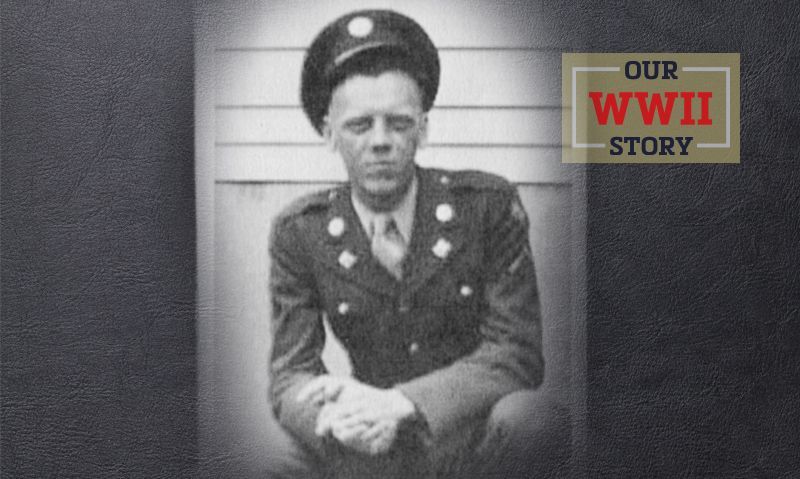 Leo Guabello Jr. submitted a diary of his father’s “from his Army-Air Force days during the Pacific campaign. It covers a period from 12/1944 to 5/1945 and deals with his service at New Guinea and the Philippines as a radio-radar operator …. This is the war diary of radar/radioman Leo Guabello (Sr.) as he served our country with distinction.” Guabello Sr. died in 2020. Selections from the diary are below.

Dec. 6 to Dec. 17. Still on ship. What an awful lot of water. Passed equator & international date line. Getting very hot. We were initiated “shellbacks” for crossing equator for first time: ended up in a water fight. Am winning in poker. Other activities: reading detective mysteries, pinochle and checkers. Destination Hollandia, New Guinea.

Dec. 18 to Dec. 24. Met boy from Pompton Lakes. Played for Panthers & Giants (teams of guys). A submarine (Japanese) tormented us for a day, but we lost it at nightfall (beautiful darkness). Australian B-34 warned us of sub. One of our guns fired at possible torpedo wake. Nothing happened. Today we are in the Solomons (Dec. 24). Passed & seen Guadalcanal & Tulagi. Beautiful “terra firma.” Tomorrow is Xmas. Turkey for chow. What a deal. Wow!

Dec. 28, 1944. Are in a convoy today. Due to fog last night, we lost the convoy. Skipper kept circling until convoy showed up. A foghorn was heard close by, and a freighter missed us by yards. Took another “rain” shower today. Wonderful to be clean. Land all around us yet. Will probably dock tomorrow at Hollandia for assignment and further orders. Expect mail on arrival. Hope so anyhow.

Dec. 30 & 31, 1944. Spent the 30th docked in the bay. Still on board, but blackout has ceased. Today (31st) we’re supposed to disembark. Anyway, preparations are being made. Had a few big shots on board *(high-ranking officers). Probably needed a fourth in bridge. Our orders were taken off (they did not disembark). Had a movie on deck last night. Now have reception from the States on the radio. Good music. New Year’s Eve tonight. Hope I’m on shore.

Dec. 30 (cont.). Were taken off Cape Mendocino & put on LCI & taken ashore. We were the last off the ship & the first on trucks. All others (1,500 men) were put on shore & put up their own “pup” tents. We (60 men) were taken out here to the airport, & are in big six-men tents. What beautiful soft-water showers direct from the (mountains). The chow is terrific: mosquitoes, awful. I feel clean again after 26 days on ship.

Jan. 1, 1945. Happy New Year. Just another day, if it weren’t for hot beer & a turkey dinner. This is a terrifically large island (New Guinea), with a few scattered J--s still in the hills. Planes buzz over area 50 feet from the ground … a beautiful sight. This new currency (gilders) gets me. 1 gilder =53 cents. It’s Dutch money and we’ll get paid in them. The scenery on the island is beautiful. Mountains 7,000 & 8,000 ft. high, with green trees & streams. There’s a waterfalls up in the (mountains), (dammed) off, and it’s a swell swimming hole. The water is pure & cold. I like the place a lot, but doubt I’ll be here long enough to really find its full effects. We’re supposed to fly out of here in C-47’s. We’re still waiting for mail, and hope it comes soon.

Jan. 6 to 27, 1945. Baseball and softball team going along swell. Richard S. left us on the 21st. We all miss him a lot. Jimmy S. & Paul R. also left. Slowly breaking up a great gang. Received word that my folks have heard from me. Am I happy. Am going to Biak Island to join the 403 Troop Carrier (Command). A darn good deal. Only delay is air transportation.

Feb. 1, 1945. Flew from Hollandia in a C-47, to the isle of Biak, located just off the northwestern coast of New Guinea. No more candles *(used for light in the tents); wonderful homes, best chow I ever had. The 2-hour plane ride was very thrilling. Before I left, little Sammy W. & I had a very nice talk. We hated to part. One of the best kids I’ve met yet. Comes from Phillie. This will be my home for a long time now. Will discuss my work tomorrow.

Feb. 1 to Feb 26. Working very steadily. Changing IFF (695s) and repairing LORANs. We have 13 C-47s in the outfit. It’s rumored around that we’ll be moving out in a few months to the Philippines. My back! I can see a lot of work ahead.

March 15 to April 4. March 24 - 2 J planes took whole island by surprise by dropping 14 bombs, causing fair damage in warehouse area, C-54 & 2 P-38s burned up. 40 lives taken, 200 wounded. Next few nights many practice alerts were staged. (Anti-aircraft and combat aircraft) outfits moved in very fast for protection of island. Now tonight *(April 4) we had 3 blackouts; 2 were our own planes with IFF out, other unknown. We have to check IFF of our planes and had a lecture on being extra precautious now that we are in danger. Still unknown where enemy planes came from on night of raid. Probabilities point to J---held held New Guinea or Celesges. J--s in hills quieted down. We hold about 1/15 of island *(Biak); only 3 airstrips, Mokimer, Sorido & Boroki, outside of surrounding camp areas. After 2 weeks of preparation we’re prepared for anything the J--s have to offer.

April 4 to April 22. 4th/Rumors are starting that the outfit is moving. Where I don’t know. 20th/Going to Leyte *(the Philippines), and I represent the radar dept. on the advanced echelon. I’ll maintain our equipment up at Leyte as the planes land our supplies & men there. What a deal. I’m my own boss for a few weeks. 22nd/Am flying to Leyte in the morning. A lot of packing to do tonight. Also taking my library of over 75 books.

April 23. Landed on Morotai on a stopover. One engine stopped 10 min. out of Morotai. We were told by pilot to get ready to throw our personal equipment out into the ocean to decrease weight. Plane was losing (altitude) fast. Overjoyed when we spotted Morotai. Pilot made a beautiful landing on one engine. Were 150 ft. when we entered landing pattern. Too close for comfort. Fixed trouble temporarily and resumed flight to Leyte. Flew over J---held Mindanao, but encountered no flak at all. Landed at Dulag Strip, Leyte after 2 ½ hours flying time. It looked wonderful from the air; orchards, oak & pine trees, green grass, etc. That same day the laborers of adv’o ech. *(the Seabees?) started building our homes. I got to work on my job. No J--s at all on Leyte. Location is 30 miles due south of Tacloban.

May 5. Whole outfit finally arrived except for rear (echelon) still at Biak. I was relieved for a few days and did nothing but sleep. My Officer of Radar said I did an excellent job for 1 man. Area is coming along very nicely. It’ll be the nicest on the island when finished.

*(There are no more entries beyond this point.) *(Leo Guabello told this story decades after the war: He and his buddies climbed a hill on Leyte overlooking a vast expanse of the ocean, and there they beheld a colossal number of ships, hundreds upon hundreds, stretching out to the horizon. An officer in his group said it is only a third of a gigantic flotilla, one that MacArthur is gathering for the invasion of Japan.)