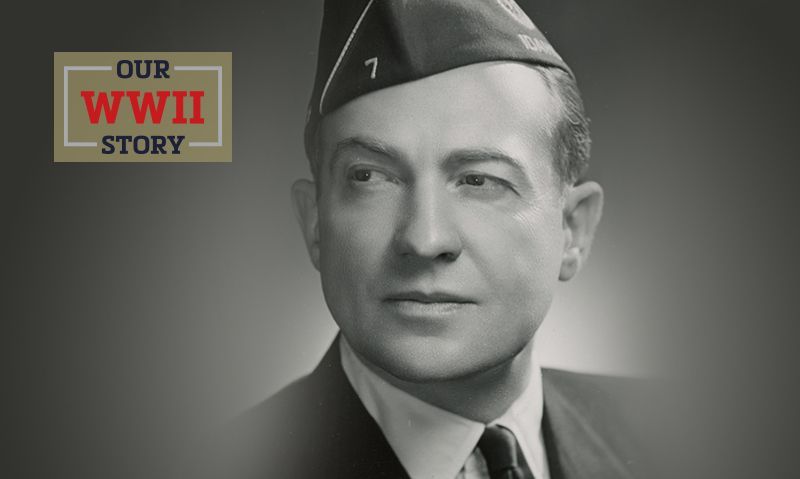 Thirty-year-old U.S. Army Capt. Fred LaBoon of Chickasha, Okla., spent three years as a prisoner of the Japanese after the fall of Bataan during World War II. He was tortured, beaten and nearly starved to death, witnessing dozens of his comrades die in captivity.

Forty-year-old former Lt. H. Dudley Swim of Twin Falls, Idaho, a Stanford-educated Navy reserve officer who had been assigned to active duty in 1942, was the first World War II-only veteran elected to serve as an American Legion department commander.

In November 1945, a month before LaBoon’s medical discharge and as Swim was serving his term in Idaho, they were elected to flank National Commander John Stelle as American Legion national vice commanders, first of their generation to rise to that office. Surprised as they were to reach that position, their elevation to top national leadership was by design, according to Stelle.

“One year ago just now, I was in the prison camp of Zentsuji, on Shikoku Island (Japan),” LaBoon told the American Legion National Executive Committee on Dec. 15, 1945, when he was still receiving medical care from his ordeal as a prisoner of war. “The years and months had drifted with awful slowness since Bataan – years and months of retrospection, reflection and loneliness for home, my people, and America. Then came a letter from my old Legionnaire dad down in Chickasha, Okla., a member since the Legion was first formed. Do you know what was amongst the biggest news in that letter? Family, of course. Friends? Yes. Yet there is no description of innermost feeling when I read that The American Legion was to be opened to World War II veterans when victory was won. That meant me – me a Legionnaire.”

Idaho’s Swim told the NEC at the same meeting that “when I came out of World War II service a few months back, I turned to look for some means of carrying on as a living thing the principles which we had dedicated ourselves in this war.” He said he found those means through The American Legion, particularly the Preamble to its Constitution, which he called a “masterpiece of life’s principles.”

Stelle, former governor of Illinois and key leader in the fight to pass the GI Bill, had trumpeted the importance of welcoming the new generation of World War II veterans, who by the end of his term would outnumber World War I veterans and propel the organization to its highest membership in history – 3,326,556.

“We start off this year in the Legion with great prospect,” Stelle told the NEC, noting that by the time of World War II, the public and media were starting to regard the quarter-century-old American Legion as “a passing out or dying organization.” A special American Legion World War II Liaison Committee had been formed in 1942 to prevent that from happening. The committee began building a foundation that would carry the organization through the second half of the 20th century.

“We are a real, live, strong, forward-looking organization,” Stelle told the NEC. “With the younger members coming into the Legion by the thousands, we will be a force for good in America.”

Stelle praised American Legion posts and departments that had welcomed to their rosters the new veterans – hundreds of thousands of whom were familiar with the organization as Sons of The American Legion members thanks to the World War I service of their fathers.

Such was the case for LaBoon.

The still-recovering soldier had accompanied his father to the 27th National Convention, in Chicago, where he described himself as his dad’s “baggage carrier.” National leadership had other responsibilities in mind for the young Oklahoman. “I didn’t expect to become acting national commander within the space of a year,” he said, noting that he was primarily excited to join his father’s team at the local post, serving in the honor guard and “to stand at salute or uncover in prayer with the chaplain, to talk of the problems of the veterans – veterans of the war in which I served, as well as those of the war a quarter century before.”

Swim, a successful business leader whose family was influential in the development of southeastern Idaho, told the NEC that the new generation of veterans “are bringing the fresh sparkle, zest, energies and enthusiasms of the new and younger American veterans. As these groups are welded in this partnership, there will soon disappear the differentiation based upon World War I and World War II labels. The measure of distinction will be in the type of individual thinking and philosophy which we maintain – whether we are looking back down the road where we have been, or eagerly on up the road where we have yet to travel.”

As a new generation of American Legion leadership originated through the elections of LaBoon and Swim, Stelle reminded the NEC that certain aspects of the organization’s identity were timeless, specifically the concept that a veteran is a veteran. “We are a cross section of America – every race, creed, color, every type of thought, so far as the political life of America. If we ever engage, as an organization, in partisan politics, in my humble opinion, we will cease to exist.”

As the NEC grappled with such issues as the housing shortage – especially acute with the World War II generation coming home – along with help for disabled veterans, LaBoon acknowledged that his generation was not out of line with that of his father’s.

“We firmly believe in the democratic destiny of America and will always strive to preserve her freedoms,” he said. “We believe in the economic ability of our country to go ahead to new goals of prosperity, home establishment, family comfort and happiness. That is the hopefulness of youth. We believe in national security represented by preparedness, as the strongest adjunct to permanent peace – as protection for our prosperity, our homes and our families. We know the toll of unpreparedness. We believe in veterans’ organization such as is assembled in The American Legion. We believe in the principles of the Legion, in its program of care for the helpless or sick veteran, of care for his dependents, of interest in his employment or re-employment. We believe in an educated America, for ignorance is the abscess of national decay. Our desire is to take our place as freshmen on the Legion team. We will play the game for all that it is worth. But it will be with the principles of sportsmanship and fairness that you taught us in boyhood days.”

In introducing these newly minted red-cap Legionnaires at National Headquarters in Indianapolis, Stelle told the NEC the values they were expected to uphold, along with the future they needed to drive.

“They will keep fixed before them the infallible principles of care of the sick, and disabled veteran and his dependents. They will interest themselves in the proper hospitalization of the veteran. They will attend to the essential legislation of national security in order to make permanent the peace they so nobly won. They will give their time and attention to child welfare, to Americanism – to God and country. So, we place the first foundation rock of this new milestone.”