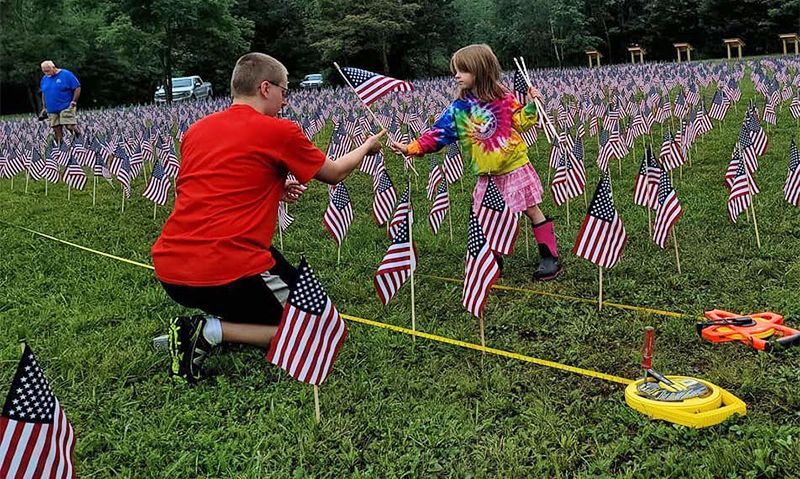 American Legion Post 911 in Shanksville, Pa., which was chartered in 1946, unveiled Patriot Park Memorial to honor those involved in the Global War on Terrorism, just prior to the 20th anniversary of 9/11.

Post 911 members joined Randy Musser and other local residents to create the Patriot Park Foundation that oversees the project, which was about four years in the making.

It started out with a simple goal, “From the Legion point of view, we just wanted to do something that focuses on veterans,” said Bob Munhall, post senior vice commander.

The new memorial features 7,049 flags, one for each casualty in the Global War on Terror. Additionally, it has nine story boards featuring information about the war on terror, including three dedicated to Gold Star Families in Somerset County.

“It truly is a focus on veterans,” Munhall said. “There is no reference to Flight 93. It focuses on the Global War on Terrorism.”

The Patriot Park Memorial is directly across U.S. Route 30 from the Flight 93 Memorial in Shanksville. Musser owned the 15-acre property and donated it for the new memorial. He has a wide range of family and extended family serving or involved with the military.

“He is a good neighbor with a patriotic focus,” Munhall said. “Much like the Legion's focus on serving the community, Randy and his family wanted this to happen.”

The late Jim Chapman, the former assistant adjutant at Post 911, a 1964 graduate of Shanksville High School, Air Force veteran and past commander of the Department of Virginia, played an instrumental role, Munhall said.

Chapman and Munhall installed a Pentagon-shaped flag display on the site in spring 2019 with Musser’s Kneeling Patriot silhouette in the center with an American flag. They were both original board members.

Years ago, a temporary Flight 93 memorial had a Little League-type backstop alongside the parking area, where visitors left their own tributes. More than 60,000 items — hats, poems, flags, Purple Hearts — were collected at the site and now kept in a secure location. Munhall hopes the new memorial will rekindle some of that spirit.

“It evolved into a wonderful slice of Americana,” Munhall said.

This “public/local Legion partnership” will work together going forward. After Veterans Day, they will pick up the American flags and store them during winter. “We just don’t want the flags to get beat up in the snow and bad weather,” Munhall said.

While the memorial is open for visitors, there are big plans to expand it.

The plan for 2022, Munhall says, is to create storyboards for all of the Pennsylvania casualties and a directory of all the casualties so out-of-state visitors can find their loved ones.

In 2023, they envision a picnic pavilion, measuring 110 feet long and 40 feet wide, with dog tags hanging from the rafters that will represent fallen veterans. Next, work will begin on a Gold Star Memorial. That project is expected to cost from $3.5 million to $4 million.