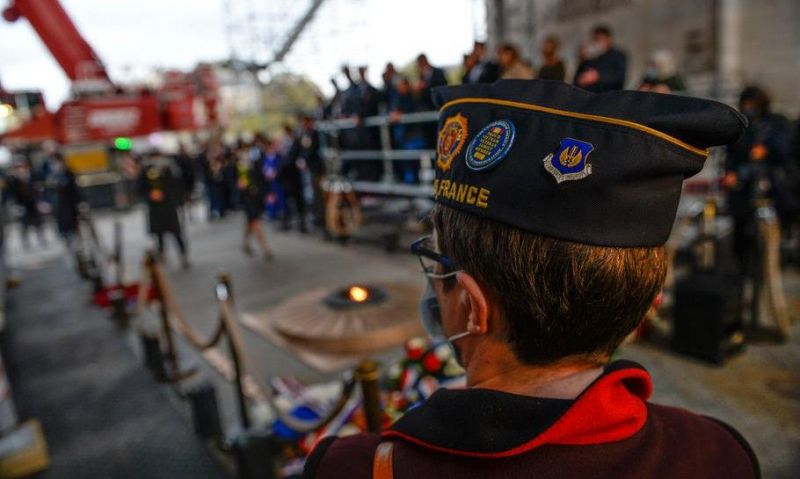 Each night at 6:30 p.m., France pays tribute to its war dead with the rekindling of the Eternal Flame and a remembrance of the nation’s Unknown Soldier.

Dozens of Americans joined the ritual at the Arc de Triomphe on Tuesday night after a 10-day pilgrimage across France in celebration of the 100th anniversary of the dedication of the U.S. Tomb of the Unknown Soldier.

Participants said the pilgrimage reflected the depth and warmth of U.S.-French relations at ground level, even as diplomatic relations have fractured over a submarine acquisition deal that led France last week to recall its ambassador to the U.S. for the first time.

The group visited the four World War I cemeteries where the candidates for the U.S. Unknown Soldier were chosen in 1921, then arrived in Chalons-en-Champagne, where the soldier was selected, for a ceremonial vigil and parade.

They continued to Le Havre, where the USS Olympia took the Unknown Soldier back to U.S. shores, sending him on his way to his final resting place at Arlington National Cemetery.

“We were all just very honored to see the respect and affection of the French people toward us,” said Craig Fallon, who served as a tomb guard at Arlington from 1962-1963.

The group traveled with a U.S. flag they flew over the four WWI cemeteries, a piece of wood from the USS Olympia and other treasures. The collection will go on display at the Washington Navy Yard and the U.S. Capitol rotunda before arriving at the national cemetery on Veterans Day.

In remembering the Unknown Soldier, “we remember every single family that has no place to mourn their loved one,” said Gavin McIlvenna, the pilgrimage’s chief organizer, who served as a tomb guard from 1997-1998.

The idea of honoring an unidentified soldier began in France in 1916, while WWI raged across the country and the ultimate outcome remained in doubt.

Following the war, 21-year-old veteran Auguste Thin was chosen to select the French Unknown Soldier from among eight candidates. The soldier was laid to rest at the Arc de Triomphe on Nov. 11, 1920.

The U.S. largely followed the French example and chose Sgt. Edward Younger to make the selection. A year after the French, the U.S. Tomb of the Unknown Soldier was dedicated.

On Tuesday at the Arc de Triomphe, representatives laid wreaths and flowers from organizations that included The American Legion, the Association of the U.S. Army, Democrats Abroad, Daughters of the American Revolution, American Gold Star Mothers, Junior ROTC from Defense Department schools in Germany, the Society of the Honor Guard, Veterans of Foreign Wars and the U.S. Embassy Paris.

France is America’s oldest ally, and there is a shared sense of gratitude starting with the American Revolution, said Denise VanBuren, the DAR’s president general.

“People everywhere have stopped us to share how they feel,” VanBuren said. In making this pilgrimage, “I feel as though we are further strengthening our bond.”