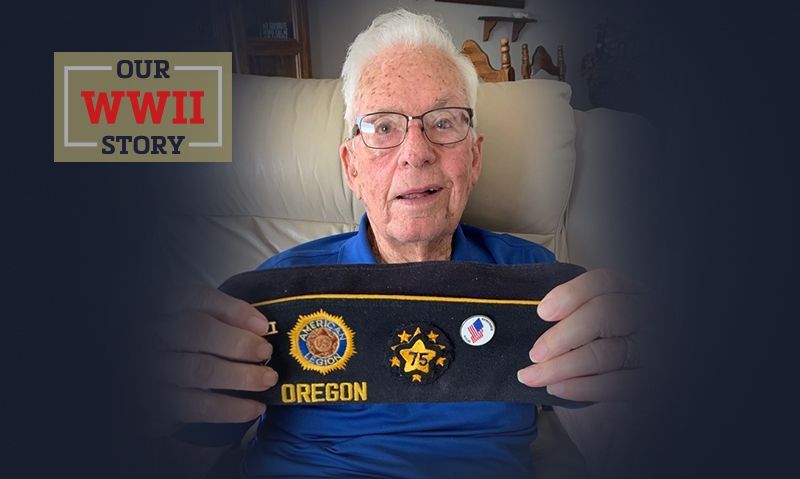 During our monthly meeting on Oct. 4, 2021, I experienced something few post commanders will ever get to participate in: the presentation of a 75-year patch to a member.

C.J. “Mike” McMichael was encouraged to join the Legion in Curtis, Neb., by his brother-in-law in 1946. He was drafted into the Army and signed on the dotted line on Aug. 17, 1944. He entered the European theater in January 1945 as a combat engineer and served with C Company, 12th Combat Engineers. He spent five months overseas working with a crew doing general repair and construction on roads and bridges.

In an interview with me after the ceremony, McMichael reminisced about when their company ran out of food in the Ruhr Valley in the summer of 1945. He and a couple of buddies rowed out into a beautiful lake and commenced fishing with explosives. Upon “luring” the fish to the surface, they gathered up their catch and delivered them to the company cook. The men continued their fishing expeditions for nearly a week, keeping the mess tent supplied with the local aquatic cuisine. He also shared with me a short story of his older brother, Herbert, who survived the Bataan Death March.

McMichael was discharged in Atterbury, Ind., in June 1946. In 1969, he and a surveillance crew went to Vietnam and worked at several bases in I Corps during a six-month period. Although he can’t remember the dates, he served a year as our post commander. He has suffered several strokes but still manages to attend our monthly meetings. During a Sweet Heart Potluck, he was honored with a Quilt of Valor made by several local women who created beautiful quilts for military veterans.

When it came time to present the distinguished 75-year award, several of his comrades quickly assisted him to his feet. Every member rose in unison, and upon the completion of the presentation of the patch, they all rendered him a proper salute. He later described the emotional event to his family through misty eyes.
To borrow a term from Bob Hope, “Mike, thanks for the memories.” And now I have misty eyes.