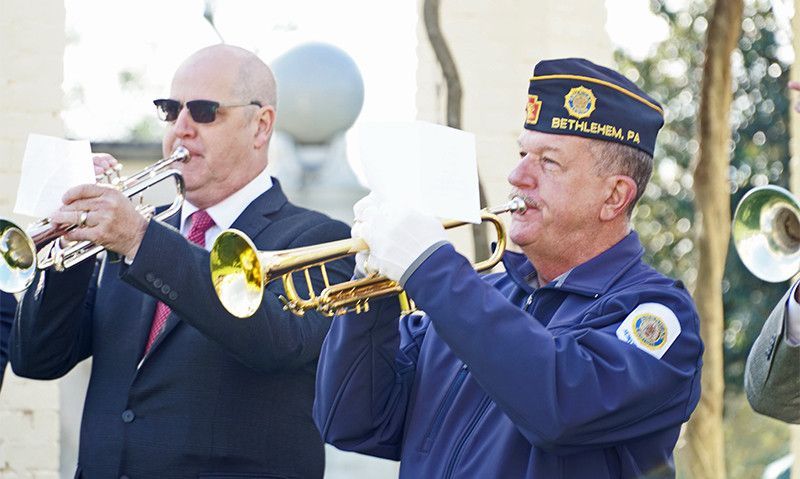 Buglers came to Arlington National Cemetery from across the country Sunday to honor those who have played taps at the Tomb of the Unknown Soldier since it was dedicated 100 years ago.

American Legion honor guard buglers were among those who performed, as a group, the famous 60-second tribute to the fallen as activities kicked off to celebrate the centennial of the tomb’s 1921 dedication.

“There is no higher honor than to be able to give a family closure,” said Legionnaire Gino Horner of Wasilla, Alaska, who played taps in battlefield memorial ceremonies of the Vietnam War during his Army tour there. “That’s what taps is. That’s the end of the ceremony. That’s closure right there.”

Horner was among dozens of volunteer buglers who lined up to play in the centennial remembrance at Tanner Amphitheater. They later walked the hallowed grounds of Arlington National Cemetery and placed wreaths at the graves of the buglers who played taps in each of the three Tomb of the Unknown Soldier interment ceremonies of the 20th century.

“The buglers who played during the burials of the Unknown Soldiers in 1921, 1958 and 1984 had immense pressure placed upon them,” explained former Tomb guard and retired Sgt. Maj. Gavin McIlvenna, who leads the Society of the Honor Guard, Tomb of the Unknown Soldier, which has organized centennial events in Europe and throughout the United States. “The eyes of the world upon them, they had just one shot to get it right. Rain, snow, sun, humidity, even the insects, nothing is allowed to deter the bugler from hitting all the notes just right. Families may not always remember the words that are spoken at funerals. But they always remember taps. Crisp, powerful, mourning, haunting.”

“The bugler is always kind of forgotten,” said Gail Belmont, an Army veteran and honor guard bugler for American Legion Post 131 in Valley Springs, Calif. “You’re on the spot for that 60 seconds, and you have to give it everything you’ve got. It’s the last thing they get. It is the last thing that everybody remembers.”

“I never felt it was a sad song but instead a tribute to a day well spent,” Jo Ann Maitland, national president of the American Gold Star Mothers, told the crowd. She said she remembers as a young woman singing “Day is Done,” at the evening’s end of summer camp; in 2002, she became a Gold Star Mother, and the song became deeply meaningful, and a source of comfort.

“As I represent the mothers and families of the fallen, you will often see tears roll down when we hear the first reverent notes of the bugle as taps is played,” she said. “So now, as I try to listen, and even though the tears may still flow, I relate this melody to honor a life well-served and to be comforted that our heroes are eternally tucked in.”

Ralph Brodt III of Harriet Johnson Post 379, in Bethlehem, Pa., has been playing taps since he won a silver bugle award in the Boy Scouts, as an eighth grader. “Funeral directors in town started calling me, and they would actually take me out of school – because most funerals are in the morning – they would call up my principal and say, ‘Could you let him out of school?’ They wouldn’t even ask my parents. They would ask the principal of the school. They would come and pick me up, take me to the funeral, I would play, and they would bring me back to school. And then, on top of it give me $5. I thought I was the king of the road. Five dollars for 24 notes.”

When it was discovered he had the musical talent during the Vietnam War, he was quickly assigned to serve as his Marine Corps platoon bugler. He has been bugling ever since, never tiring of taps. Last Friday, as the sun set over the Potomac River, he took a moment there and played taps in remembrance of Gen. Colin Powell.

Each time he plays, he knows he has a responsibility. “I feel that I must play every note as perfectly as possible. Every time I am finished, I say a thank you to God that he got me through it and got me through it nicely so that the family has a remembrance of their loved one.”

Matthew Dannan, first vice commander of American Legion Post 8 in Washington, D.C., spent four years in the Marine Corps, 10 years as a high school teacher and now is back on active duty in the Air Force as a full-time music librarian. A longtime trombone player who has recently begun playing the bugle, he said the opportunity to play taps at Arlington with the others from around the country is an honor. “Just to be included today, because my job in the Air Force Band is so behind the scenes, I don’t get to really participate much in the music side …  to be able to play taps today is important.”

Dannan made the point that with DNA testing, the likelihood is slim that America will have more Unknown Soldiers in the future, so it’s especially important to share the story for future generations. “It’s just amazing the heritage we have,” he said. “The stories are really important to who we are, as currently serving veterans and also as Legionnaires, to continue that story in the future.”

Historian Jari Villanueva, a member of American Legion Post 109 in Arbutus, Md., and organizer of Sunday’s tribute as a leader of the Taps for Veterans national group, said the spirit of Frank Witchey, first taps bugler at the Tomb of the Unknown Soldier, is alive and well at the cemetery where he is now buried. “On Nov. 11, 1921, Sgt. Frank Witchey, an Army bugler, sounded the call of taps on the plaza of the memorial amphitheater, bringing to a close the ceremony for the burial of the Unknown Soldier of World War I. For the next 100 years, the call would echo on the plaza of the amphitheater.”

He then led the group and members of the Witchey family to the grave of the first Tomb bugler, where they placed a wreath of flowers. They had similar ceremonies at the grave marker of Sgt. 1st Class George Myers of the U.S. Army Band, known as “Pershing’s Own,” who played for ceremonies honoring the Unknown Soldiers of World War II and the Korean War in 1958, as well as that of Sgt. Maj. Patrick Mastroleo, who in 1984 played for the Vietnam War Unknown Soldier, who was later identified and repatriated, using DNA.

The group also placed a wreath at the grave of Gen. John Pershing, who elevated recognition and expectations for Army musicians – thus the name “Pershing’s Own” for the U.S. Army Band. Pershing was an honorary national commander of The American Legion.

McIlvenna, fresh off his trip to Europe where the centennial of the Unknown Soldier’s selection and departure from France were commemorated, said the historical significance of taps is not lost on America’s longtime allies.

“Over the last two weeks, the society, along with the American Gold Star Mothers, The American Legion and Daughters of The American Revolution have followed in the footsteps of the World War I Unknown Soldier as he went from a small unknown city or town in America, across the Atlantic on a troop ship to an uncertain fate, and finally to the battlefields of France where he fell, defending others and their freedom … In each cemetery, town or ceremony, we heard many bugle calls but none that we felt in our core like that of the ‘Call for the Dead’ – no matter what it’s title is, ‘Lights Out,’ ‘Last Post,’ ‘To the Dead’ or ‘Taps,’ this haunting bugle call played during funerals reaches deep into the warrior, as well as the family members who are present.”

As a Tomb guard, he explained, he heard it 15-20 times a day and felt the same sense of honor and respect every time. He asked that those gathered Sunday share the story with young people and others who may not understand. “Don’t let this moment fade. Embrace it and teach it to the next generation.”

“There’s a saying that goes around with all buglers,” Villanueva added. “For 60 seconds, the bugler has the most important job in the military.”