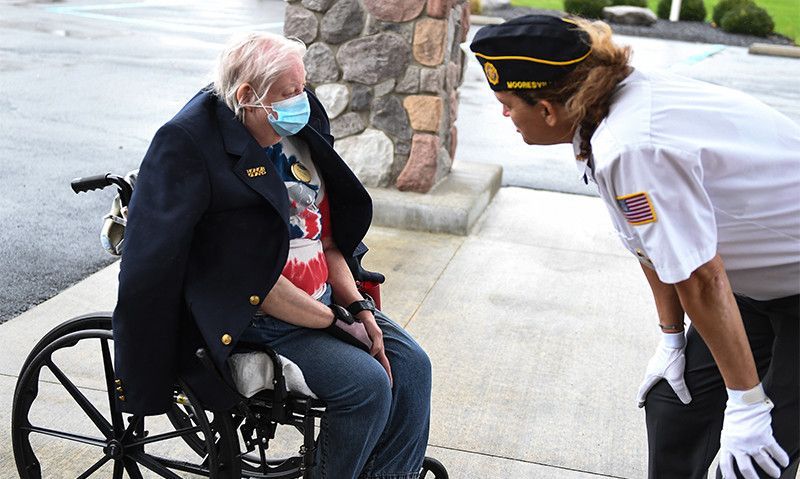 Addressing fellow Legionnaires, local students and community members inside of the Historic Mooresville Gymnasium in Mooresville, Ind., American Legion Post 103 Commander Nicholas Kirk reiterated that the group gathered there was doing so to honor veterans, as they do every Nov. 11.

But the 48-year-old Kirk, who also is a member of the post’s Sons of The American Legion squadron and American Legion Riders chapter, said the day also can serve as a reminder of our responsibilities as citizens of the United States.

“Now it is time to honor not only those who have fought or are fighting for our freedom,” Kirk said. “It is also the time for each of us to take part in protecting it. Each of us here have that duty and responsibility … for example, voting in elections or speaking out against injustices … by volunteering in our communities or teaching our children what it really means to be an American.”

The ceremony was hosted by Post 103 and Veterans of Foreign Wars Post 1111, and was followed by a lunch at Post 103 and then the two posts’ combined honor guard visited veterans in local nursing homes and assisted living communities.

“Today, we honor all of our veterans who selflessly put their lives on the line for our nation,” Kirk said during the ceremony. “Those men and women were ordinary people, until they heard a call for duty and answered it. They left families, their homes, their lives – not for recognition, fame or even the honor being bestowed on them today. They fought to protect our country and maintain our way of life.”

After serving in the Air Force and Air National Guard, Kirk moved over into the U.S. Navy, retiring in 2015 after 22-plus years of military service that included a combat tour in Iraq. The Paid-Up-For-Life Legionnaire said it’s important to involve the community in events like the Veterans Day ceremony.

“To me, it really brings home it’s not just military members that sacrificed. It’s families: brothers, sisters, mothers, cousins,” he said. “So why not involve the community? They supported the veterans that were serving.”

The Veterans Day event has annually extended into the community, with the Posts 103/1111 honor guard visiting local nursing homes, this year visiting Miller’s Merry Manor nursing home, Meadow Lakes Assisted Living and The Springs of Mooresville senior living community. They brought with them thank-you cards made by students at Mooresville Schools.

Past Post 103 and Seventh District Commander Ken Pridemore, who coordinates the joint honor guard, said that tradition pre-dates his becoming involved around 15 years ago. The honor guard used to bring food with it to give to the residents, but pandemic restrictions have stopped that.

Tammy Snell-Stover, a member of the honor guard and of Auxiliary Unit 103, works as a staff nurse at Miller’s Merry Manor. She sees what the Veterans Day visits mean to the residents there.

“It touches them,” she said. “Usually, you see at least one or two tears. It means something to them.”

Because of the pandemic, Snell-Stover said making the Veterans Day visits “is even more important than it was two or three years ago. It’s a huge deal. A lot of these folks don’t have a chance to pay respects. This is a way we can say ‘thank you.’”

For Kirk, Veterans is about both saying thank you and remembering those veterans who came before his generation and younger.

“I was born and raised an Army brat. My dad is retired Army, 30 years. I saw what we went through with him as a family, with his deployments and everything,” Kirk said. “To look around and see all the veterans – I think we still have two World War II veterans (who are Post 103 members) – if it weren’t for all of those men and women who served before I served, would I be here?

“Through my time in service – I did multiple tours oversees – I lost friends and I lost family. They’re still my brothers and my sisters. If you really think about it, if it weren’t for the ones who served before us, where would this country be?”