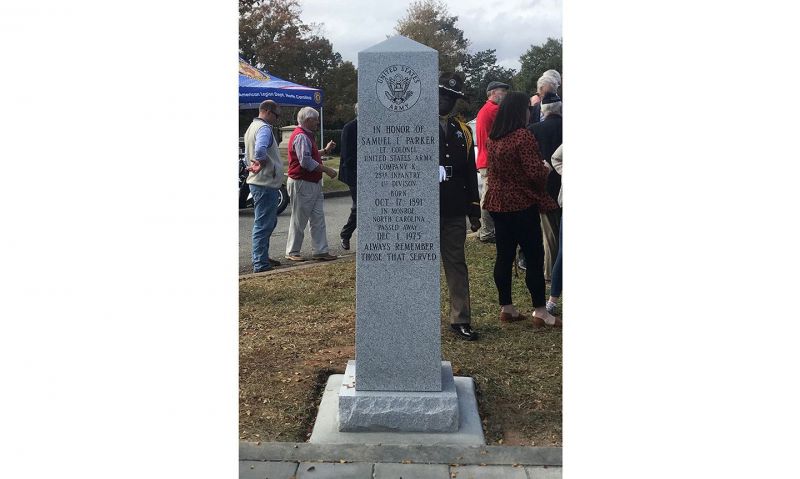 Since 1975, Lt. Col. Samuel I. "SI" Parker has been buried in Oakwood Cemetery in Concord, N.C., his grave identified simply with a small marker noting his name, date of birth and death, service in the U.S. Army in World War I – and that he received the Medal of Honor.

When members of American Legion Riders Chapter 51 in Concord came across the marker, they wanted to do something to honor Park on a grander scale. And now they have.

On Veterans Day in front of more than 100 people, the Riders unveiled to the public a monument honoring Parker at the cemetery. The four-side stone tribute notes his time in service, and his company, infantry unit and division. One side notes the Purple Heart he received, while another side has engraved on it the Army Medal of Honor.

North Carolina American Legion Riders Chairman Jack Ward, a member of Post 51, said he and his fellow Post 51 members found out about Parker’s former grave marker a year and a half ago when they made one of their two annual trips to the cemetery to replace flags on veterans’ headstones.

“One of the guys came back and said, ‘there’s a Medal of Honor recipient here,’” Ward said. “It truly was amazing that nobody had recognized this guy.”

Ward said in May of this year he approached members of Chapter 51 and said, ‘this guy deserves the honors that are bestowed on Medal of Honor recipients. We need to do some fundraisers and develop a program and get this guy a monument that’s fitting of his honors. That’s how it started.”

The Riders went around the area collecting funds for the project, including a donation from the city of Concord. Ward had a chance meeting with a grand nephew of Parker and was able to get permission to build the memorial. Ward said he looked at other monuments to come up with a design for Parker’s, which cost around $7,000 to construct.

Considered the most highly decorated U.S. Army soldier of World War I, Parker also was awarded the Distinguished Service Cross, two Silver Stars, the Legion of Merit, two Purple Hearts and the Croix de Guerre. He earned the Medal of Honor for his actions on July 18-19, 1918, when he led his troops and others to successfully establish a frontline position after hours of severe fighting near Soissons, France. His actions led to the capture of six machine guns and around 40 prisoners.

Parker joined the Army Reserves following the war and then went on to fight in World War II, serving more than 20 years in the military.

“Nobody knew anything about him,” Ward said. “So I started looking into it a little bit, and our district commander, Jim Kelly, did a remarkable job. He went to the library down in Monroe, which was where (Parker) was born and raised, and they had a historical area in the library. We sat there for hours and accumulated a great deal of history on the man. And through several other interviews with family members, Jim wrote an entire article on the history of (Parker).”

Ed and Sam Moss, Parker's grandchildren, were present at the unveiling. Ed said he was grateful to the Legion for its work on the monument. "It is all about The American Legion and the Riders,” he told the Independent Tribune. "They were the ones who wanted to do this. It is wonderful to see veterans pulling together and wanting to honor others."

Ward said seeing the monument unveiled “was so heart-warming. It was many months of working on this and worrying if it was going to come to pass and if we’d have anybody show up,” he said. “Seeing over 125 people show up to show their respect to this man … it just unfolded perfectly. It was so doggone rewarding to have it all come together after all these years.”

Ward challenged other Riders chapters to visit their local cemeteries to see if any Medal of Honor recipients are buried there with little in the way of a memorial or grave marker. “A good, vast majority have not been paid the respect they’re so deserving,” he said. “It might be something we can really do to promote this.”