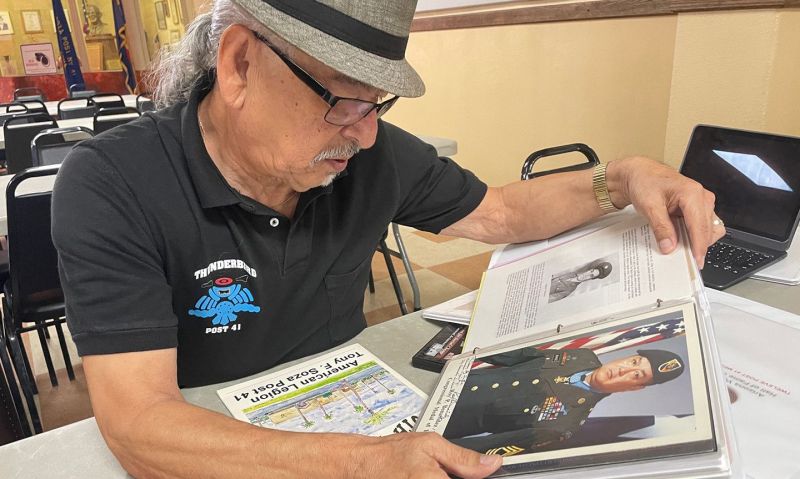 Members of American Legion Post 41 in Arizona are rightfully proud of their rare connections with Medal of Honor recipients. Over the years, three MOH recipients have been post members, including Jay Vargas who is active today. (Vargas shares his first-person account here.)

But a deeper look reveals a rich and unique history of Tony F. Soza Ray Martinez Post 41. Much of that history would have been lost if it were not for the efforts of Robert Hernandez, a former department historian, post commander, post adjutant and current post historian.

Post 41 has served the Hispanic community in Phoenix with pride and honor since its founding in late 1945. Decades ago, the post sponsored American Legion Baseball and softball teams. A 1964 photo shows the T-Birds baseball team posing with their championship trophy. However, the trophy itself is among the historical items that have been discarded.

“The history is what matters — what we did as a post still matters,” he said, noting a past post commander had thrown out boxes of historical information. “I don’t know how much was lost. But I grabbed as much as I could.”

Even though he has unearthed a great deal of Post 41 history, his search continues.

“I want to figure out what happened to Carlos Ontiveros who was the first commander in 1945,” said Hernandez, whose 34 years of service in the Air Force and Air Force National Guard spanned from Vietnam through Operation Desert Storm. “I can’t find anything on him.”

The search has yielded diamonds in the rough from the countless number of boxes of records, artifacts and other information that was destined for the trash. Among the items: the original charter.

In his research, Hernandez also discovered the critical role the post played in a housing discrimination issue. As Hispanic veterans returned to Phoenix after serving in World War II, they found themselves in a segregated city. People with dark skin were denied the same access to housing, public pools and movie theaters.

“They didn’t want minorities. We were not allowed to purchase houses on the other side of Van Buren,” he said, noting the dividing line, a major road in downtown Phoenix. “When Ray Martinez heard of a veteran was not approved for a loan he said that’s a violation of the GI Bill. They got into fighting for that veteran’s rights.”

Martinez, a World War II Navy veteran who served as post commander from 1945-48, helped pave the way for the integration of the area in the 1950s. He also became the first Hispanic department commander in Arizona.

Tony Soza, the other post namesake, was a Silver Star recipient. He became the state’s second Hispanic department commander in 1968.

In addition to Vargas, the post’s other two Medal of Honor recipients were Vietnam veteran Nicky Bacon and World War II veteran Manuel Mendoza, who was awarded his medal posthumously, 70 years after his actions.

Hernandez has discovered evidence of the post serving its community in times of need.

For example, in the 1940s, the post devoted space and resources for “Blue Babies.” These infants were struck by a potentially fatal blood disorder because they lacked oxygen. The babies were healthy at birth. However, upon returning home, they were fed formula prepared with well water.

The water had been contaminated with nitrates. After a baby drank formula with nitrate-rich water, the body converts the nitrates into nitrites. These nitrites bind to the hemoglobin, forming methemoglobin, which is unable to carry oxygen.

The post building was adapted to allow for parents to bring their babies in where they stayed and were treated by a member who was a doctor and nurses from the Auxiliary unit.

“They did it until the city created a hospital on this side of town,” Hernandez said.

His research project began in 2003 when he became post adjutant and wanted to learn as much as he could about the post. He dove into decades-old files at the post, a library in Phoenix and at the National Headquarters archives in Indianapolis.

“I started doing the research myself and that’s when I started to find all this out. I got wrapped around the axle.”

Hernandez grew up in the area, and went to school just down the street from the post home, where his father was a member.