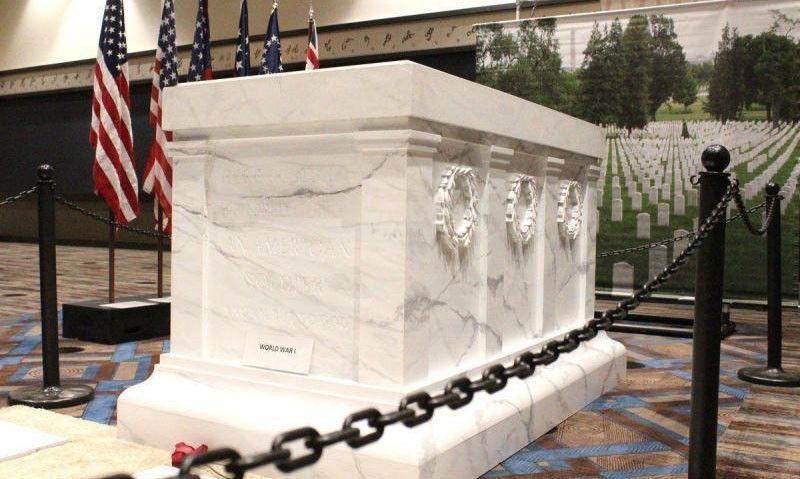 As events across the United States and in Europe marked the 100th anniversary of the Tomb of the Unknown Soldier in October and November, some of those events were part of a pre-existing tribute that has been crisscrossing the country for several years from its home in Georgia.

The National Exchange Club is a service organization founded in 1911. The chapter in Rome, Ga., through its Americanism Committee, debuted on Memorial Day 2015 a half-scale traveling replica of the Tomb of the Unknown Soldier called “A Call to Honor.” According to project manager Bill King, the replica was constructed based on photographs and dimensions obtained from Arlington National Cemetery. “It was constructed by Phillip Burkhalter Builders of Rome, which is owned by a member of our club. It was constructed after their regular work hours.”

“It is the hope of the Exchange Club of Rome and the National Exchange Club,” King says, “that the sacrifices of our men and women in uniform are never forgotten, for without their supreme sacrifice of their lives, and in the case of the unknowns their identity, our way of life would not be possible.”

Rick Hunt, adjutant of Shanklin-Attaway American Legion Post 5 in Rome, says the Tomb replica has appeared at a post Veterans Day observance at the Tomb of the Known Soldier. Pvt. Charles Graves was killed in action in 1918. After an initial burial in France, his remains were brought home in 1922, and had been selected as “America’s Known Soldier” for a planned accompanying monument in Arlington – and a funeral parade down Fifth Avenue in New York before that – but his mother objected, and he made it to his final resting place in Rome on Armistice Day 1923.

Local organizations can request a visit from “A Call to Honor” by contacting King at (706) 766-8451 or kingglfnt@yahoo.com. He says of American Legion posts, “In some instances the … posts have been co-sponsors or either participated in opening ceremonies and wreath-laying, and it was great to have their involvement.”

View a calendar of events here. Meanwhile, in Wisconsin, Legionnaire Jeffrey Unger organized the construction of a more local replica; read that story on Legiontown.