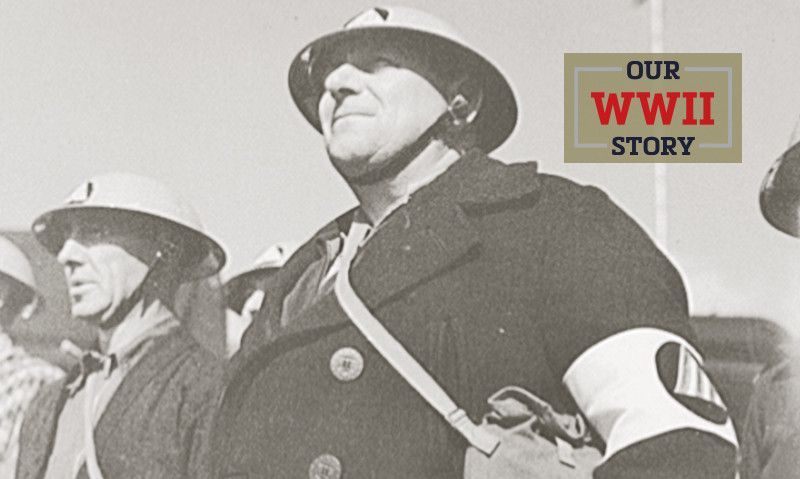 The Dec. 7, 1941, attack on Pearl Harbor put the U.S. west coast on high alert, and The American Legion sprang into action.

“From the Canadian border to Mexico, Legionnaires of the departments of Washington, Oregon and California are on the job, in the military service, civilian defense or on Legion programs bearing directly on the all-important objective of winning the war,” the National Legionnaire newspaper reported in its January 1942 issue.

The departments immediately registered volunteers from their rosters to fulfill duties based on specific occupational skills, fitness for duty and ability to perform civil defense in the event of another enemy attack. California signed up 67,000 volunteers, Washington 17,000 and Oregon 12,000.

“Within two hours after the attack on Pearl Harbor, the guard and patrol group of Columbia Power Post No. 120, Portland, under the leadership of Harry F. Stengel, commander, turned out to guard substations, transmission lines and river crossings of the Columbia Power Development throughout the Pacific Northwest,” the National Legionnaire reported. “Other post patrols were patrolling shipyards, aircraft factories and other war industries.”

Seattle Mayor Earl Milikin, a member of Post 1 there, was put in charge of the city’s civil defense program. Hundreds of Washington Legionnaires there joined him in efforts to secure ports, protect key utility infrastructure and manufacturers.

Department of Oregon Commander Joseph K. Carson Jr., “placed at the disposal of the governor” the entire Legion membership of the state. He made an identical commitment to the National Guard, offering Oregon’s registered volunteers for duty however needed. He then wired every post commander in the state to have their members report at once to county coordinators of local civil defense committees.

“Action was immediate, since many Legion units such as the Portland guard and patrol units … have actually been functioning for years,” the Legionnaire reported.

The Oregon Shipbuilding Co. was launching a ship a week at the time of the report, and such companies as Commercial Iron Works, the Albina Engine and Machine Co., Willamette Iron, Iron Fireman Co. and Columbia Aircraft were operating at top speed, fueled by proximity to natural resources and power from Bonneville Dam. The home-front war effort was at full throttle, just weeks after the attack, throughout the West.

“No traveler in the west coast – if he can get through – can pass by without sensing the part of The American Legion in preparedness,” the National Legionnaire observed. “Posts, officers, members and the Auxiliary are taking the emergency in their stride. It is a fine record.”

In California, every American Legion post was mobilized within 24 hours of the attack. Future American Legion National Commander Warren Atherton, then the organization’s national Defense Committee chairman, led the movement to offer all of California’s Legionnaires to assist the governor and president during the crisis.

Past National Commander Frank N. Belgrano, Jr., was “working day and night as a member of the San Francisco civil defense commission,” the report explained. “He takes on every job of a patriotic nature and in spite of added pressure remains cool and optimistic.” Another past national commander, John R. Quinn, was serving as chief of the Los Angeles civil protection agency.

Also in Los Angeles, Legionnaires of Japanese ancestry condemned the Pearl Harbor attack “and we unreservedly offer our services in defense of our land against attack,” according to a resolution passed by the city’s Commodore Perry Post 525, which consisted almost entirely of U.S. military veterans of Japanese ancestry.

By January 1942, hundreds of thousands of Legionnaires were organizing and acting on support plans – as promised to President Franklin D. Roosevelt immediately after the attack – to serve in defense of the homeland.

National Commander Lynn Stambaugh had issued firm guidance to posts nationwide that included military recruitment, war bond sales, aircraft warning and air-raid warden services, use of post facilities for military and defense needs and ceremonial firing squads for those who die in service during what had suddenly become America’s place in World War II.