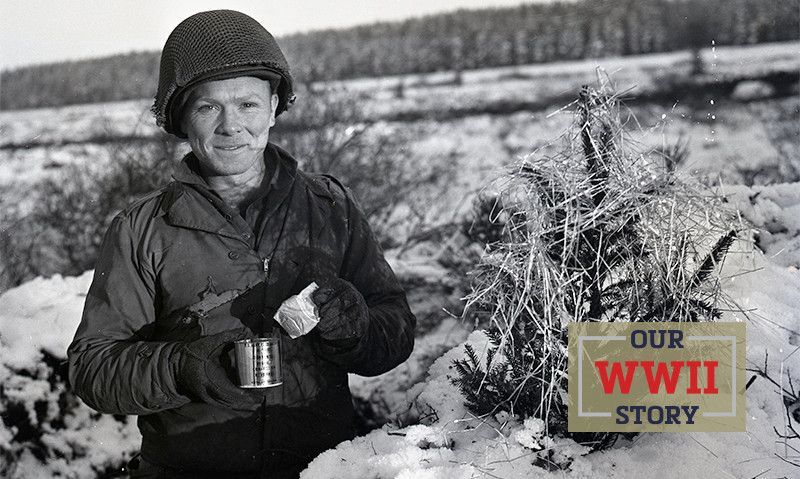 Sgt. John F. O’Brien of Pittsburgh decorates a Christmas tree with a C ration can and tinsel dropped from U.S. planes in the Monschau area of Germany. Tinfoil is dropped by American planes to interrupt the enemy radar system.

In the Pacific, U.S. Navy ships faced deadly attacks from Japanese kamikaze pilots. In Europe, Americans were fighting their way through Luxembourg and Belgium toward the frozen, snowy showdown against Nazi Germany in what was called the “Battle of the Bulge.”

In the United States, American Legion posts and American Legion Auxiliary units were reminding those in service on both fronts of World War II, and thousands more recovering at hospitals stateside and abroad, that they were not forgotten during the holidays, no matter how far away they were from home, or how long they had been gone.

The January 1945 National Legionnaire calculated that the organization had sent 1,179,350 gift packages to personnel at 1,314 military installations, including hospitals and convalescent facilities. Letters of appreciation, primarily from patients at military hospitals in the United States “are coming in by the hundreds,” the publication reported in January, quoting from just a few:

“Thanks for making our stay in the Stout Field Station Hospital one of the most enjoyed episodes of our Army experience. The receipt of these gift boxes makes us believe that The American Legion is vitally interested in our welfare.”

“Today a veteran of the South Pacific received your Christmas package, and as he is in my ward, gave me a gift from it. I will never forget the gratitude of these boys.”

-                WAC Pvt. Eithel G. Young, serving her country although she has four daughters, two sons and two granddaughters, assigned to the hospital at Fort Jackson, S.C.

“I am writing this at the request of my husband, who was in an accident. When The American Legion presented him with a Christmas package, he really was a happy soldier.”

“Your Christmas gift was one of those things that gives your morale a shot of nitro, just about the time you think that you are the forgotten man. It is truly a great feeling that the Legion is interested in making a lonely G.I.’s Christmas a little brighter."

“I am a patient here; my husband (an enlisted man) was shipped from this field the Saturday before Christmas. Christmas eve some of your Legionnaires came through and presented the patients with gifts, and I thank you for your many kindnesses.”

“Thank you for the gift. I have many friends who are members of the Legion in Missouri, so I sort of felt as though each of them was thinking of me at this time of the year.”

“I thank you for remembering me on Christmas Day. I have missed three Christmases at home, but you have made this the best since I have been in the Navy."

“I was one of the lucky G.I.'s who got one of your nice Christmas boxes. It sure made it seem more like Christmas, especially after being in here 47 days.”

Legionnaires also sent thousands of Christmas cards to troops around the world. However, Christmas cards addressed to APOs that winter came with a misunderstood regulation that they “must be sealed and require three cents postage.” As a result, more than 3,000 cards were held up in Chicago and sent to the dead-letter branch, due to insufficient postage.

Two members of Van Buren American Legion Post 401 in Chicago (90% of whose members worked for the postal service) determined that the cards could be saved if the post simply added a 1 ½ cent stamp on each one. A telephone vote of the post's executive committee approved, and for an outlay of about $50, the 3,000 greeting cards “went merrily on their way instead of ending up in the waste basket,” the National Legionnaire reported.

Meanwhile, in neighboring Wisconsin, the American Legion Family of Sullivan-Wales Post 11 in Green Bay, sent holiday gifts to “every Green Bay son and daughter in the armed forces at Christmas time.”

The Green Bay Press Gazette praised the post for its third straight year of sending the gifts to deployed GIs: “Altogether, it was a jeweled, jubilant thought, thoroughly organized, timed and concluded for the hearts of those who took part in their work.”

The post sent approximately 3,000 gift boxes to troops overseas and another 2,000 to others serving stateside that December. The gifts were deeply appreciated and sometimes heart-wrenching, according to the National Legionnaire.

“One mother of a lad in the Pacific wrote: ‘My son said he received a box from Green Bay, and it made him very happy because he was the only one in his group to get one, and he divided it up with seven men … A week after I got his letter, I was notified by the government that he had been killed in action. God bless The American Legion.”