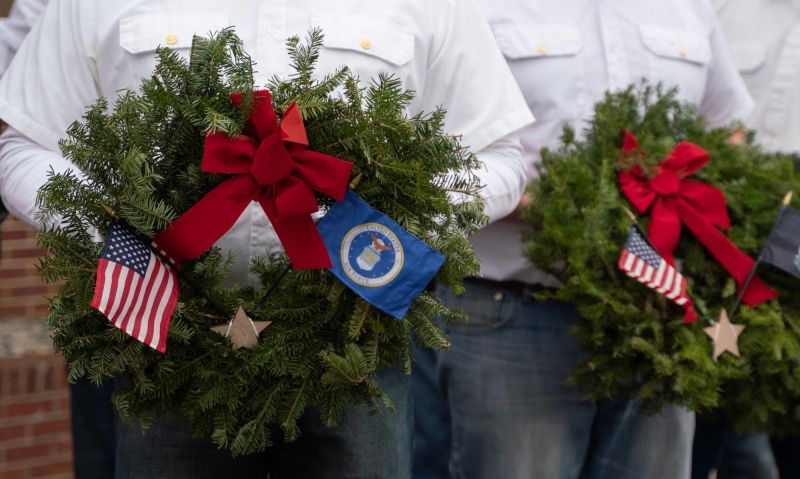 In terms of size, there isn’t a lot to Cissna Park, Ill. The village located in the central part of the state just over 20 miles from the Indiana state line has a population of around 850 people. Locally owned businesses line the main drag of 2nd Street, which turns into Ill. 49 as one leaves town.

But in terms of patriotism and displaying honor to those who have served in the U.S. military, there is a lot going on. And that was on full display Dec. 18 when American Legion Post 527’s Legion Family conducted a Wreaths Across America (WAA) event that brought out members of a community that have supported the program since the post started it a few years ago.

Following a ceremony in the public park across from the post, Legionnaires, Sons of The American Legion and the families of deceased veterans headed out to seven area cemeteries, where they placed more than 900 wreaths on the graves of those veterans.

Post 527 and Squadron 527 conduct fundraisers to purchase the wreaths – utilizing WAA’s “3 for 2 Program” that provides a third wreath for every two sponsored by an organization – and receive sponsorship from community members.

“This is our fifth year,” said Sons of The American Legion Squadron 527 Adjutant Ron Lynch, who coordinates WAA for Post 527 as a Sons program. “The first year we did about 405 wreaths, which covered just our area. This year we’ve doubled that number. It’s growing every year.”

“We got back to town, and I talked to a few of the Legion members,” Lynch said. “I said, ‘It’s great to cover the national cemeteries, but we have vets here in town. And that started to blossom. And that year we covered all our vets.”

Post 527 Honor Guard Sergeant Fred Bauer was among the Post 527 members who went to Abraham Lincoln National Cemetery in Elwood for the WAA event. He’s happy with the way the event has grown at Post 527.

“It was very impressive, and we decided we needed to do that here to honor all our veterans,” said Bauer, a member of Post 527 since the mid-1960s. “It’s fantastic to see (the local wreaths). This town has been very, very supportive of The American Legion.”

Attended by dozens of those community members despite a light drizzle and wind chills in the high 20s, the WAA ceremony included its honor guard, a flag line comprised of members of Cissna Park’s FFA and the flags of every branch of the military and the POW-MIA flag. A wreath honored each branch, while Post 527 Adjutant Richard Swing placed a wreath on a stone cross near the park’s entrance with the words “Dedicated to those missing in action” etched on it.

“We are all proud … to live in a free society made up of many people, many races, many walks of life,” Swing said during the ceremony. “The freedoms we enjoy today have come, but not without a price. Lying in the cemeteries throughout the nation are men and women who gave their lives so that we could have the freedoms that we have today. We can worship as we see fit. We can raise our children as we believe. We can travel from one end of this great nation to the other. We are free to vote for whomever we feel should be in government office. We have the right to succeed, and we have the right to fail at whatever endeavor we pursue.

“We thank all those who gave their lives to keep us free, and we shall not forget them. Today we show … national unity all across the United States of America as we remember the fallen, honor those who served and teach our children the value of freedom.”

Following the ceremony, wreaths were taken to Cissna Park Cemetery and six other cemeteries “that cover our Legion area,” Lynch said. The remainder the wreaths were provided to other community cemeteries, including in nearby Milford, which Lynch said is trying to start up its own WAA event.

“Our goal eventually is to cover Iroquois County,” Lynch said, noting that the community is instrumental in the program’s success. “Cissna Park is a community of 850 people. This year we had 947 wreaths that we ordered. So the support from the community is amazing.”

Squadron 527 member Jay Kaufman showed up at Cissna Park Cemetery with his mother Phyllis to lay a wreath at the grave of his father, Korean War Army veteran Archie Kaufman, who passed away in 2014. It was a special moment for Jay, as have been previous Wreaths Across America events.

“It’s special. It’s really special,” Jay said. “(Post 527) started doing this a few years ago, and I’m really happy that they did. It means something to me.”

Department of Illinois Commander Wayne L. Fischer came to Cissna Park to attend his first Wreaths Across America event. The whole idea behind WAA “is pretty special to me,” he said. “I was a Vietnam (War) Marine helicopter pilot. The last mission of every day, when we had KIAs, our job was to bring them on the first leg coming home. That was very special, and that’s why it’s an honor for me to be here today, to be part of this very, very special program.”

Despite being in a remote area, Post 527 has a membership of 220-plus members, as well as more than 130 SAL members. That it’s been able to turn its Wreaths Across America program into such a success impressed Fischer.

“We’ve got a little over 700 posts in the state of Illinois,” he said. “A lot of posts find something … that fits their local area, and they take care of it. I’m honored to be here for this, and I think it’s something special. It just takes a few to make it happen.”

For Lynch, the reward is seeing hundreds of veterans’ graves – a bronze American Legion grave marker on each of them – decorated with a wreath. “It’s amazing, the feeling you get,” he said. “We’re standing here today doing this type of work for our vets. Like the sign says – some gave some, some gave it all. These guys gave it all.

“I’ve lived in this community for 40 years now. A lot of these guys were good friends of mine, and we’re putting wreaths out on their graves.”