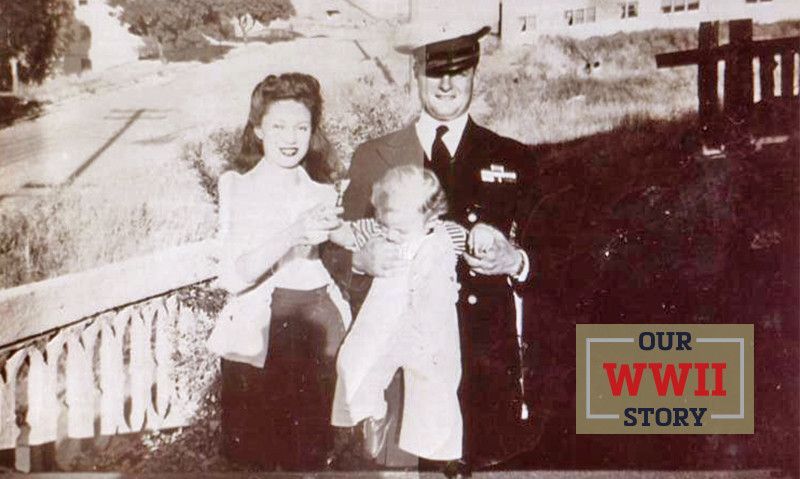 The Lowther family at the Benjamin residence in San Francisco in 1945. (Photo via Arthur L. Lowther Jr.)

Arthur L. Lowther Jr., a member of American Legion Post 283 in Jacksonville, Fla., submitted an account by his mother, Doris Lowther, of her experiences as a Navy wife crisscrossing the country by train to be with her husband while his ship was being repaired.

“My husband, Arthur Leon Lowther of Ridgeland, S.C., and I were married on June 6, 1942, in Central Falls, Rhode Island, where I lived. Leon was in the U.S. Navy and on convoy duty in the North Atlantic. When we first met in 1941, he was stationed about the battleship USS Arkansas. Later he would be reassigned to the newly commissioned destroyer Allen M. Sumner (DD-692), which was destined for wartime service in the Philippine Islands and Pacific Ocean.”

Sumner saw action against Japanese forces in December 1944 and January 1945. Leon Lowther, a chief boatswain’s mate, was awarded the Bronze Star and a Purple Heart for actions during that period.

“On Jan. 14, 1945, Allen M. Sumner began its voyage to San Francisco (Hunters Point) via Hawaii for much-needed repairs because of substantial damage. It arrived at Hunters Point on Feb. 13 to begin repairs. At that time my husband Leon was given shore leave, and he flew to Rhode Island to join me and Leon Jr. (then eight months old). Upon completion of his leave, Leon flew back to Hunters Point and made arrangements for me to join him for the duration of Sumner’s repairs. I traveled alone by train, and we stayed in San Francisco with a Mr. and Mrs. Benjamin (regretfully, I do not remember their names, but they took us in and sheltered us during this period of tension and trial).

“The repairs to Sumner were taking longer than expected, and we decided that I should return to Rhode Island, get Leon Jr., and travel back by train to California. I did so and returned to Hunters Point sometime in May 1945. The four-day/night return trip by train via Chicago was difficult, and even more of a challenge with a 10-month-old child. At that time, the last two cars of the train from Chicago to San Francisco were reserved for military wives and children. We had food vendors come through for those who could not get to the dining car. I had my monthly military allotment check with me, but had no place or opportunity to cash it. So with the few dollars I had on hand, I lived on very tasteless sandwiches for the trip. Leon Jr. had sufficient baby food I had brought with us. This was wartime, and we all sacrificed and did what we had to do. I arrived in California, and Leon saw to it that I had transportation to the Benjamin residence.

“Finally, Sumner was repaired and was scheduled to depart San Francisco on July 17, 1945. Before his departure, my husband suggested that I stay for another couple of weeks – he had a feeling that he may not go to the Philippines but return to San Francisco. I stayed for another two-and-a-half weeks, awaiting my next military allotment check so I would have the funds to return to Rhode Island. About Aug. 3, with Leon Jr. (now 1), I departed California by train to the East Coast. Again, it was a very tiring trip. Although we had a full seat, I slept sitting up for four days while keeping an eye on Leon Jr., who was just beginning to walk.

“After four days and nights, with a train change in Chicago, we arrived in Pawtucket, Rhode Island, and taxied home. I was immediately told by a relative, ‘The war is over.’ I was exhausted and could not understand what I was told. We switched on the house radio and learned that an atomic bomb was dropped over Hiroshima, Japan, on Aug. 6 with tremendous devastation. Although the war was not over, it was believed to be very close. On the train, traveling military wives were not informed about events, and there were no radios or ways of getting current information.”

Sumner was en route to its battle group when the war ended, and returned to San Francisco in October 1945. Leon Jr. later served in the Marine Corps. Leon Sr. died in 1988. Doris lives in Savannah, Ga., and will turn 100 next July.