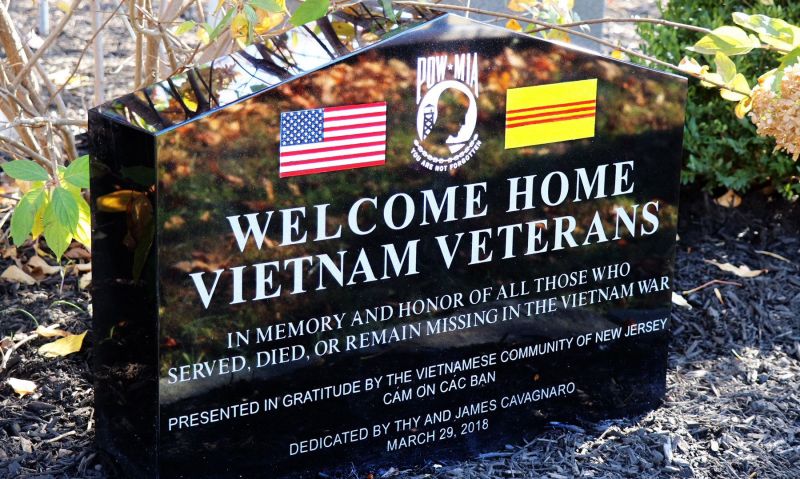 Vietnam veterans monument in Barnegat, N.J., made possible by Thy and Jimmy Cavagnaro that was dedicated on the first National Vietnam War Veterans Day, March 29, 2018. Photo provided by Thy Cavagnaro

March 29 is designated as National Vietnam War Veterans Day. This is a time to pay special tribute to the 9 million Americans who served during the Vietnam War era, to the 58,000 names memorialized on the Vietnam Veterans Memorial in Washington, D.C., and to those who never received the recognition they deserved when they returned to America from war.

March 29, 1973, is the day U.S. Military Assistance Command, Vietnam was disestablished and the day the last U.S. combat troops departed Vietnam. In addition, on and around this same day, the U.S. Vietnam War Commemoration stated that Hanoi released the last of its acknowledged prisoners of war.

American Legion posts are supporting efforts to honor these veterans, along with other ceremonies held across the nation. For more information about National Vietnam Veterans Day events, visit vietnamwar50th.com.

American Legion Post 113 in Elizabethtown, Ky., honored more than 50 Vietnam veterans during its drive-thru celebration last Thursday. Veterans drove to the post where they were handed a Vietnam war medallion, coin and a goodie bag. Legionnaire Bill Spence of Cecilia was one of the many Vietnam veterans recognized. "We didn't get a welcome home, but we're getting it now," he told the News-Eneterprise. "That's all that matters."

The following are a few examples of how American Legion posts are commemorating National Vietnam War Veterans Day. If your post is hosting an event, please share it on legiontown.org.

American Legion Post 36 in Boothbay Harbor will host a ceremony at the Vietnam Veterans Memorial in Augusta on March 29 at 1 p.m.

American Legion Post 275 in Chicopee will be among several veteran organizations to host the city’s first National Vietnam War Veterans Day to honor the 15 servicemembers from Chicopee who died during the war and the nearly 2,000 Vietnam veterans living in the area. The event will occur March 29 at 3 p.m. at the RiverMills Center.

American Legion Edward W Thompson Post 49 in South Haven will host a remembrance ceremony March 29 at 11 a.m. at its 26-foot wide Vietnam Veterans Memorial Wall in the post which lists the names of the 2,655 Michigan servicemembers, including three from South Haven, who died during the Vietnam War. The ceremony will include a Vietnam Memorial 21 gun salute and a tour of the wall.

American Legion Post 225 in Forest Lake will honor Vietnam veterans March 27 at 2 p.m. at the post. The theme this year is “Wounded in War,” where the post will feature guest speaker Bill Strusinski, a combat medic during the war and the author of “Care Under Fire.” He also will lead a panel that includes combat nurses Valerie Buchan and Mary Lu Brunner and three veterans who were wounded during the war and medevacked out of Vietnam, Tim Sather, Edwin Ohmann and Ben Morales.

The event is free and open to the public.

- American Legion Post 6 in Corinth will host an appreciation breakfast from 9 a.m. to 11 a.m. for Vietnam veterans.

John Wesley Taylor American Legion Post 232 in Barnegat, N.J., will host a Welcome Home to Vietnam veterans on March 29 from 9 a.m. to 2 p.m. Legion Family members and the Department of Veterans Affairs, Department of New Jersey and Mobile Vet Center will be available to provide services to veterans that require assistance.

The Thanking Vietnam Veterans in Barnegat started in 2018 by Vietnam refugee Thy Cavagnaro and her husband, Jimmy. “I made it a goal to try to reach as many Vietnam veterans as possible to let them know how much people like me and my family deeply appreciated everything all Vietnam veterans did collectively to help fight for our freedom in Vietnam,” Thy said.

Together, American Legion Bassett-Baxter Post 789 in Carthage and the Lowville American Legion Post 162 are honoring Vietnam veterans and their families Wednesday, March 30. There will be a recognition ceremony at 10:30 a.m. at St. James Catholic Church in Carthage. A brunch will be held at Post 789 from 9 a.m. to 1 p.m. The Carthage Central High School JROTC will conduct a formal POW-MIA ceremony at the church, and designated soldiers from the 10th Mountain Division will present pins and certificates to the veterans. Veterans are asked to sign up at either American Legion post or email their information to post789@carthageamericanlegion.org or post162@lowvilleamericanlegion.org.

American Legion Post 126 in Hertford will host an open house Saturday, March 26, from noon to 3 p.m. to commemorate the end to the Vietnam War and honoring those who served in the war. A veteran service officer will be available at the post to answer any questions, and veterans will be treated to a lunch. Vietnam War veterans are encouraged to bring photographs and other memorabilia from the war for display on tables that will be set up.

The Steve Youngdeer American Legion Post 143 in Cherokee will celebrate the end of the Vietnam war with a gathering at the Wolfetown Community at 11 a.m.

American Legion Post 202 in Medina has asked retired Air Force Maj. Gen. Ed Mechenbier, a Vietnam War POW, to speak about his experiences. Mechenbier will share his story March 26 at 1 p.m. at the Medina Count Veterans Memorial Hall. The presentation is free to the public.

“You can talk to people that fought in wars and came home, but there are fewer people that you can talk to who were actually held as prisoners, and it's a unique opportunity for citizens to understand that aspect of war,” said Dave Taylor, American Legion Post 202 member and the event coordinator, to The Gazette.

American Legion Post 93 in Eastsound will host a National Vietnam Veterans Day ceremony at the post on March 29 at 11 a.m. All are welcome to attend, especially Vietnam veterans and their families.

All Wyoming veterans, especially those from the Korean War, Vietnam War and other veterans who were not properly thanked upon their return home are invited to attend and receive a welcome home at three different ceremonies on March 30. The first ceremony begins at 8:30 a.m. in Green River at American Legion Post 28; then a ceremony takes place at 11:30 a.m. in Worland at American Legion Post 44; and the final ceremony will be at 3 p.m. in Gillette at the Campbell County Senior Center.