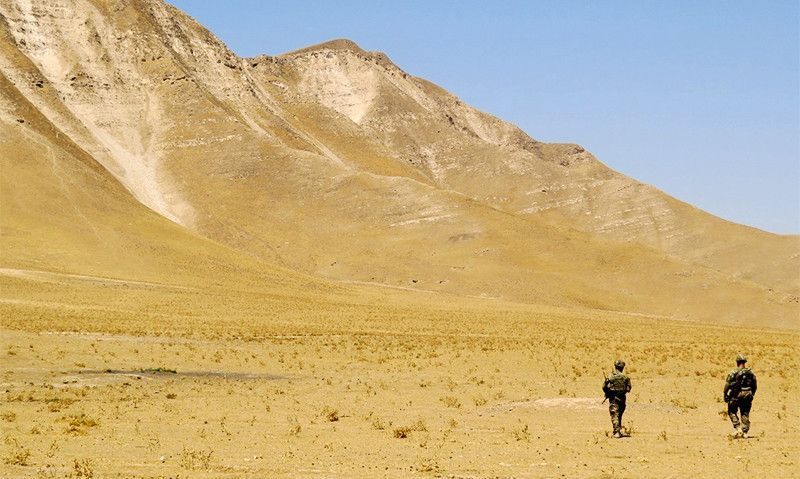 U.S. Soldiers with Bravo Troop, 6th Squadron, 4th Cavalry Regiment, 3rd Brigade Combat Team, 1st Infantry Division, patrol the area outside of the proposed range at Kunduz province, Afghanistan, July 3, 2013. While deployed Soldiers focus not only on maintaining security, but also on training to improve skills. The unit is from Fort Knox, Ky., and arrived in Afghanistan in the month of May. (U.S. Army photo by 1st Lt. Charles Morgan/Released)

The current state of military history was the focus of the annual Pritzker Military Museum & Library’s On War Military History Symposium held March 31 and April 1 in Chicago.

Three panel discussions highlighted the second day of the summit, which was held in person and virtually.

During the final presentation, panelists addressed the challenges of documenting the history of the current Global War on Terrorism. The session, entitled “Lessons to be Learned: Writing the Military History of the Post-Cold War Period,” covered how different audiences such as academics and military professionals use these histories.

Among the panelists was Daniel Marston, director of the Secretary of Defense Strategic Thinkers Program and professor of international studies at Johns Hopkins University. Marston did his PhD on the British 14th Army’s Burma campaign. He conducted about 120 interviews with veterans in Pakistan and the United Kingdom, then matched those interviews with historical records.

“We are truly at phase one with understanding the wars in Iraq and Afghanistan,” Marston said. “But we are also going to be at a loss with the sources. We know the military relies now on PowerPoint. The war diaries that previous historians from Vietnam and going back used to match other records — we’re missing a lot of that, which is a problem. How will we be really able to identify where the conflicts were? The decision-making is an issue as we know. Is it going to be people’s opinions versus the actual record that has to be unpacked?”

Anthony Carlson, an associate professor of history at the U.S. Army School of Advanced Military Studies, pointed out a challenge he refers to as the “invisibility of the adversary.”

For example, Carlson cited the task in accurately documenting the history of what occurred during the war in Afghanistan without the perspective of the Afghans.

“I don’t know what the strategic aim of the Afghanistan military was or how they organized themselves at an unclassified level,” he said. “I can tease out an understanding of what their tactics were based on oral history interviews with American soldiers. But it’s difficult to get into and understand their intentionality.”

Carlson noted the time it takes to be able to properly document history.

“But it’s also one of the strengths of the discipline,” he said. “History can inform our judgment. It won’t enable us to predict the future. It won’t enable us to avoid war in the future. But history is the study of continuity and contingencies over long periods of time. And when you are able to do that, you are able to have a mind that looks at situations from multiple perspectives and develop some sort of empathy about how others who don’t see the world like you understand time and space as they unfold.”

An earlier session, “Violence, Atrocity, and the Restraint in War,” addressed topics related to the extent of violence employed by armed forces, how incidents of atrocity are treated and the contexts in which they occurred.

Panelist John Morrow, a professor of history at the University of Georgia, explained how the current invasion of Ukraine can be traced back centuries. The Chechens originally lived in Ukraine until Josef Stalin moved them east into Central Asia, he said.

“The next thing you know, in the 20th century, (Vladimir) Putin is fighting a war in Chechnya and levels the city of Grozny as an example to them. There are historical antecedents between the Russians and the Ukrainians that go all the way back to the early history of the Middle Ages,” he said.

The first session, “Museums and Memorialization,” featured a panel discussion that explored the roles museums play in the commemoration of military service and how they are impacted by popular and academic understandings of military history.

Panelist Tammy Call is the director of the National Museum of the U. S. Army at Fort Belvoir, Va. The museum opened for 34 days in November 2020 before being closed due to the pandemic. It re-opened on the Army’s birthday in 2021.

The museum “tells the story of the Army through the eyes of the American soldier through all eras, and explore the symbiotic relationship between the soldier and society,” she said.

Call was quick to point out the role of the museum.

“We are not a memorial, we are a museum,” she said. “However, we have aspects of memorialization that any museum does. The campaign streamers, the campaign wall, certain items or artifacts that tell a certain story.”

There are plans for the public-private funded museum for a memorial area outside and will host such remembrances. But its main focus will be to document the stories of soldiers.

Diversity is reflected throughout the museum, such as women who served and minorities, she said. “We hope to serve as a repository for those precious stories.”

Matthew C. Naylor is president and chief executive officer of the 47-acre National World War I Museum and Memoria in Kansas City. The museum does incorporate remembrances into its offerings.

“Many people have an emotional connection to the site,” he said. “Whether they are there at 2 o’clock at night or running the stairs at 6 a.m., people use it for memorializing in many ways.”

To that end, the museum has added seven events called Taps at the Tower. These are brief remembrance services held as the sun sets during the summer.