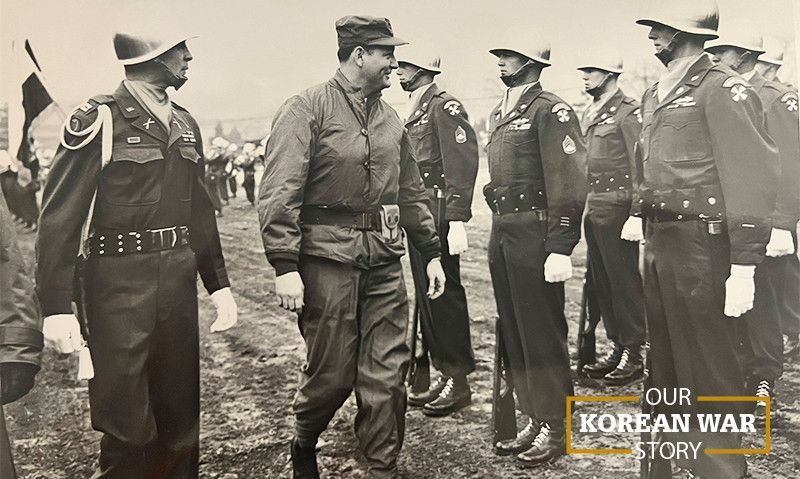 American Legion National Commander Erle Cocke Jr., who barely survived multiple wounds and imprisonment during World War II, nearly became a casualty of the Korean War when he visited the front in the early spring of 1951.

He and Maj. Gen. Frank E. Lowe were traveling in a jeep when they “hit a soft shoulder on the road, rolled down a 15-foot embankment and overturned in a rice paddy,” according to the American Legion’s news service. “Witnesses said only a 50-caliber machine gun, mounted on the front of the jeep and their steel helmets, saved the lives of Cocke and Lowe.”

The commander suffered a wrenched back, and Lowe, who had been driving, was pinned under the jeep and “was badly shaken up.”

Cocke Jr. did not let the accident change his plans.

He visited “every corps of the United Nations force,” he later wrote of his two-day tour to the front. With no pre-arranged schedule, he had firsthand access to the fighting. “I saw the situation as it was,” he reported. “It alarmed me. Now, I realize how little we in the United States know of the horrible conditions under which our men are fighting. Now I know how much they are doing on so little.”

In Korea, he met with Gens. Douglas MacArthur and Matthew Ridgway, who asked “what I wanted to see. I told him I wanted to see everything, and within time limits, I was accorded that privilege.”

He visited the 25th Division command post before transferring to a combat jeep and made his way across the Han River where, “Atop a hill of at least 75 percent grade, we watched our troops engage the enemy. We saw the terrible conditions under which our men had to scale those mountains. We saw the fully concealed dugouts, machine-gun emplacements our men had to flush out before they could take that hill, and we heard tales of ‘derring-do’ that would suffice even the most bloodthirsty. Our losses, in spite of the disadvantage of scaling the heights, were numerically small. The enemy’s dead were more than three times our total casualties.”

He went on to a position where the 24th Division – Buffalo Soldiers – had “completed a heavy, firefight with the enemy, repulsing the communists with terrific losses. There again the hilly terrain made the going difficult. Augmented by the cold and mud, conditions were about as unfavorable as could be imagined, but Col. Henry Britt, of Tipton, Ga., said his men had forged ahead across the river and up over the hills under tremendous handicap. One must see this Korean countryside to understand. No one could capture the difficulty in words.”

“However, were you to take all the abode mud in the world, dump it into the badlands of South Dakota, add a biting, arctic wind, then multiply it by 1,000, you’d have some idea of our difficulties.”

Cocke Jr. said he “heard no complaints other than the ordinary gripes of men who have been exposed to front-line duty too long. Ammunition is not too plentiful, and artillery loads are doled out on an allotment basis of so many per gun per day. Many days, because of atrocious flying conditions, there is little air support, but when a clear day does come, upwards of 1,000 sorties of all categories are flown repeatedly.”

Speaking with officers and privates alike, he kept hearing the same question: “Do the people back home have any idea of what it’s like over here?”

The commander answered in the negative.  “One can't have any idea unless he sees it. The second question invariably was: ‘When are we going to get replacements for our units?’ And my only answer had to be: ‘I don't know.’”

Hungry for reinforcements and low on supplies, the Americans fought on, outnumbered. “The enemy is a tough, tenacious foe. He has manpower aplenty. We have a dearth in this sector at least. We can go on killing North Koreans and communist Chinese, but they pour more and more into the gap. We just haven’t replacements to do that, but we are fortunate that our losses do NOT aggregate one tenth of the enemy’s loss.”